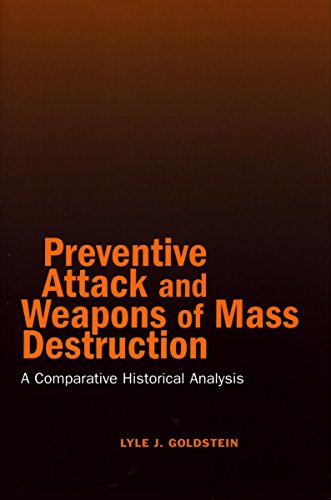 A comparative study of preventive attack and weapons of mass destruction.
November/December 2007

For most of the presidency of George W. Bush, the proliferation of weapons of mass destruction (WMD) has been among the most important, if not the most important, of the U.S. government's national security concerns. The most recent version of the National Security Strategy of the United States echoes the same report of previous years in stating that one of America's chief tasks is to "prevent our enemies from threatening us, our allies, and our friends with weapons of mass destruction." That document states further, "We do not rule out the use of force before attacks occur … . When the consequences of an attack with WMD are potentially so devastating, we cannot afford to stand idly by as grave dangers materialize." Thus, despite extensive criticism for going to war with Iraq based on what later proved to be flawed WMD intelligence, the Bush Administration has not backed down from its professed willingness to launch preventive wars against countries to forestall the use of weapons of mass destruction. Whether the United States should undertake military action to prevent Iran and North Korea from developing large WMD stockpiles is now among the most dire questions the nation faces.

Lyle J. Goldstein's Preventive Attack and Weapons of Mass Destruction: A Comparative Historical Analysis is therefore most timely for those concerned about U.S. national security. Goldstein, an associate professor at the U.S. Naval War College, sets out to determine whether the development of small arsenals of weapons of mass destruction encourages or discourages international conflict. The most influential of the previous works on this subject has been Kenneth N. Waltz's Adelphia Paper of 1981, in which Waltz asserted that small WMD arsenals prevent wars. Waltz and other adherents of this view, commonly known as "deterrence optimists," contend that WMD in the smallest of quantities discourage countries from attacking the possessor because they create great fears of retaliation on the part of would-be military adversaries and that small arsenals as well as large ones are difficult to destroy preemptively. In contrast, "deterrence pessimists" perceive the proliferation of WMD as a source of international conflict.

Goldstein concedes that nuclear weapons can promote international peace and stability, but he takes the position of a deterrence pessimist in arguing that they do so only under certain conditions. When rival powers have roughly similar nuclear capabilities, he observes, they are unlikely to contemplate war with each other, but a country's initial development of a small WMD arsenal will make countries with large WMD arsenals more likely to attack the country in order to nip WMD development in the bud. In other words, "radical WMD asymmetry"—as Goldstein terms it—encourages preventive war by the stronger power. In contradiction of Waltz and others, Goldstein posits that small WMD arsenals do not instill great fear in the minds of adversaries. Only after a lengthy period of expansion does a country's WMD arsenal promote international peace.

Goldstein takes deterrence optimists to task for citing the scarcity of armed conflict among countries with WMD as proof that proliferation discourages war. Instead, one should examine whether WMD can create international instability—as evidenced by such phenomena as the threatened use of WMD, the consideration of strategic war plans by top leaders, and the mobilization of armed forces—that makes war more likely, though not inevitable. Goldstein emphasizes the existence of "close calls" arising from radical WMD asymmetry, in which instability almost led to war but did not because of various countervailing factors. Four such factors, Goldstein argues, generally account for the dearth of preventive wars under conditions of radical asymmetry: the possibility of a costly conventional war; the adversary's alliances; international norms of state behavior; and geographic considerations. Thus, ascertaining the impact of radical asymmetry on stability requires detailed examination of the effects of radical asymmetry on international antagonists.

Previous deterrence pessimists did not draw extensively on empirical evidence, a problem Goldstein seeks to remedy by evaluating five cases in depth plus seven mini-cases. Some of the cases involve radical asymmetry while others involve cases in which neither side had a huge advantage in WMD capabilities, which enables assessment of whether the magnitude of the asymmetry makes a difference. For evidence, Goldstein relies on recent histories written by Chinese, Russian, and American historians; interviews in China, Russia, the United States, and Israel; and declassified U.S. documents. He acknowledges that the evidence is not always conclusive because most countries have not given scholars access to key records pertaining to WMD, but to make use of it judiciously is better than relying on no historical evidence at all.

In four of the five main cases and three of the seven mini-cases, radical asymmetry results in instability. In the other cases, the asymmetry is not radical in degree and no major crises erupt. In order to establish whether this correlation is the result of causation, Goldstein analyzes how radical WMD asymmetry influenced the thoughts, plans, and actions of the superior powers. For most of the cases and mini-cases, he demonstrates persuasively that radical asymmetry made war a more attractive option for the power with WMD superiority. He shows, for example, that during the early Cold War, when U.S. nuclear strength far exceeded that of the Soviets, some Americans recommended a war to destroy the Soviet Union and its nuclear program before the Soviets could build large numbers of nuclear weapons. The United States ultimately eschewed preventive war in the early Cold War not because it was deterred by Soviet nuclear capabilities but because it feared Soviet conventional capabilities and did not want to violate international norms. During the Sino-Soviet border clashes of 1969, Goldstein argues in another case, the Soviets seriously considered military strikes on China's nascent nuclear installations, and they backed off only because they feared a prolonged ground war with China.

Two of the cases do not support Goldstein's central thesis as strongly. In one of his main cases, the U.S. and China in the 1960s, he attributes tensions between these two powers to China's efforts to develop its first nuclear weapons, but in actuality the tensions were almost entirely the result of China's support of Communist expansionism in Asia. Senior U.S. officials seldom mentioned the Chinese nuclear program as a major reason for going to war with China during this period. It is also a stretch to argue, as Goldstein does in his mini-case on the 1991 Gulf War, that WMD engendered instability that led to the first American war against Iraq, though the historical record is much more sketchy than on the U.S. and China in the 1960s owing to the closer proximity to the present. The evidence currently available indicates that America's principal motives for going to war were to stop aggression and protect oil supplies, not to eliminate WMD.

Goldstein predicts that the United States is more likely to undertake preventive war against nascent WMD programs today because America's global dominance has removed two of the key countervailing factors that previously prevented radical asymmetry from resulting in war: the conventional military capabilities and alliances of the adversary. But while alliances do pose fewer obstacles for the United States than in the past, the fear of conventional warfare still looms large in American decisions on preventive war. American policymakers today are very concerned that invading Iran and fighting the Iranian armed forces would be enormously difficult for U.S. expeditionary forces and that a war with North Korea would likely entail massive American, South Korean, and North Korean casualties. In addition, the international norms in opposition to preventive war have been strengthened by the U.S. intelligence failures and counterinsurgency problems in Iraq. On the other hand, Goldstein is correct in noting that stealth, sensors, satellites, and precision weapons make it much easier for the United States to strike enemy WMD rapidly and effectively, thereby increasing the attractiveness of preventive strikes on WMD sites.

Goldstein recommends that the United States invest great effort and resources into preventing potentially troublesome countries from getting started on WMD programs in the first place, since the creation of a WMD arsenal puts much pressure on the United States or other countries to undertake a preventive war. For this reason, Goldstein calls for tough action now to stop countries like Iran and North Korea. Policymakers will find this recommendation the most important point in Preventive Attack and Weapons of Mass Destruction.

Through his keen comparison of numerous cases and his empirical validation of previously unproven hypotheses, Goldstein has made a valuable addition to the literature on weapons of mass destruction, national security, and international conflict. The book is recommended for anyone interested in those areas or in international relations and security studies more generally.

Mark Moyar holds the Kim T. Adamson Chair at the U.S. Marine Corps University. He is the author most recently of Triumph Forsaken: The Vietnam War, 1954-1965 (Cambridge Univ. Press).