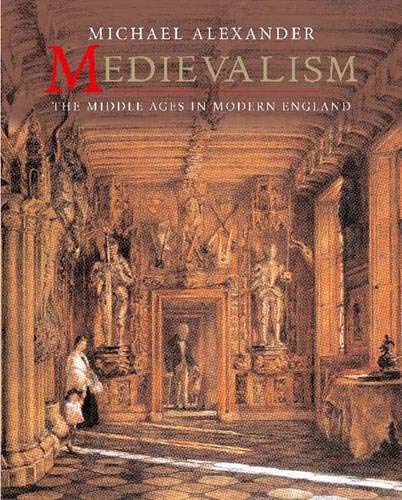 The many faces of medievalism.
November/December 2007

In Medievalism: The Middle Ages in Modern England, Michael Alexander has written a superb study, showing how differing versions of the Middle Ages helped shape the art, architecture, and literature of modern England. This is a subject of enormous scope; yet rather than march his readers through an exhaustive survey, Alexander provides a witty overview of representative painters, architects, and writers whose medievalism helped them negotiate their modernity. Printed on good heavy paper and handsomely illustrated, the book nicely complements Alexander's sprightly commentary.

The former chair of the English department at St. Andrews, Alexander traces the modern fascination with things medieval to the late 18th century, to the antiquarianism of Horace Walpole and Thomas Percy, Macpherson's Ossian (1760), and Burke's rococo elegy to Marie Antoinette in his Reflections on the French Revolution (1790-91):

Oh! What a revolution! And what a heart I must have to contemplate without emotion that elevation and that fall! … little did I dream that I should have lived to see such disasters fallen upon her in a nation of gallant men, in a nation of men of honour, and of cavaliers. I thought ten thousand swords must have leaped from their scabbards to avenge even a look that threatened her with insult. But the age of chivalry is gone. That of sophisters, economists, and calculators, has succeeded and the glory of Europe is extinguished for ever.

This pitting of the present against an exemplary past set the stage for Sir Walter Scott, Pugin, the Pre-Raphaelites, Ruskin, and the Gothic Revival. If the age of chivalry was gone in France, it could be revived in England. As Alexander remarks, "the Medieval Revival was always interested in how people should live now in the present as well as how they had lived in the past." The revival could simply have been an episode in the history of nostalgia—always compounded by the ambivalent legacy of the English Reformation—but, as Alexander deftly shows, it issued in genuinely new art in the work of, among others, Keats, Tennyson, John Everett Millais, Gerard Manley Hopkins and David Jones.

Many English readers agreed with Burke on the revolutionary French but doubted whether he understood their own history. Rockingham's friend exaggerated the achievements of the Whig aristocracy, and glossed over its sins. The English history described by the great constitutional historian William Stubbs rang truer. F.W. Maitland, the greatest of all constitutional historians, realized this later when he wrote:

Dr. Stubbs saw English history and taught others to see it in a manner, which if I am not mistaken, was somewhat new. Somewhere about the year 1307 the strain of the triumphal march must be abandoned; we pass in those well-known words "from the age of chivalry, from an age ennobled by devotion and self-sacrifice to one in which the gloss of superficial refinement fails to hide the reality of heartless selfishness and moral degradation." It was no small feat for an historian who held this opinion to keep us reading while the decades went from bad to worse, reading of "dynastic faction, bloody conquest, grievous misgovernance, local tyrannies, plagues and famines unhelped and unaverted, hollowness of pomp, disease and dissolution."

Medievalism might have begun as an antidote to unpalatable realities, but along the way it reshaped English history and became a permanent part of English identity. Keats is a good example of an artist who took the prevailing vogue for things medieval—wrought to a certain finish by Coleridge and Scott—and used it for his own original purposes. "La Belle Dame Sans Merci" (1820) could almost have been written to prove what natural bedfellows genius and pastiche are. Listen to the poem as Sir Ralph Richardson recites it and you will hear a love song of timeless power. In his decidedly unmedievalist poem, "Modern Love" (1817), Keats asked: "And what is love? It is a doll dress'd up / For idleness to cosset, nurse and dandle / A thing of soft misnomers." Well, in what Keats' knight-at-arms relates, alone and palely loitering, on that cold hill's side there are no misnomers.

Keats' medievalism had a lifelong influence on Tennyson. From "The Lady of Shalott" (1832) to "The Idylls of the King" (1891) he viewed the modern world from a disenchanted remove, convinced that the living, like Gawain's ghost, were "blown along a wandering wind / And hollow, hollow, hollow, all delight." In "The Lotos-Eaters" (1833), he describes the ennui of moderns, haunted by "an ancient tale of wrong," condemned to "labour in the deep mid-ocean," and vexed with duties they can neither honor nor shun.

What pleasure can we have
To war with evil? Is there any peace
In ever climbing the climbing wave?
All things have rest, and ripen towards the grave
In silence; ripen, fall and cease;
Give us long rest or death, dark death, or dreamful ease.

If Tennyson saw labor as a curse for spiritual sloth, Gerard Manley Hopkins joined the Middle Ages in extolling its dignity. Apropos his inimitable claim, "sheer plod makes plough down sillion shine," from "The Windhover" (1877), which Hopkins thought his best poem, Alexander is brilliant:

"Sillion" is "furrow," archaic in English but familiar in French. It comes in the refrain of the first verse of La Marseillaise, the revolutionary anthem of the French Republic, which encourages citoyens so to defend themselves against their enemies "Qu'un sang impur / Abreuve nos sillons"—"That an impure blood / Should slake our furrows." The Christian Hopkins associates the furrow made by the plough not with the blood of enemies but with daily sweat for daily bread: the lot of mankind since Adam. For medieval social thought, as seen in Piers Ploughman, this gave physical work a special value: hence the medieval maxim, laborare est orare—"to work is to pray." It also made the ploughman an archetype of man: the labourer whose labour provides the archetypal food for all. That is why, for Hopkins, the ploughman's hard work makes the earth turned over to shine in the eye of heaven.

The drudgery that Hopkins knew as an examiner in Greek at University College Dublin gave his respect for labor a hard-earned credibility. There was nothing sentimental or condescending about it. "557 papers on hand," he once remarked, "let those who have been thro' the like say what that means."

Alexander might have also pointed out how this Christian conception of labor was shared by Virgil. In his essay, "Virgil and the Christian World" (1951), T.S. Eliot explained that this was why Dante had made the poet of the Eclogues and the Georgics his guide to the ancient world. Unlike Homer, who regarded labor as infra dig, "Virgil perceived that agriculture is fundamental to civilization, and he affirmed the dignity of manual labour. When the Christian monastic orders came into being, the contemplative life and the life of manual labour were conjoined … . Christianity established the principle that action and contemplation, labour and prayer, are both essential to the life of the complete man." These truths must have particularly nagged at Hopkins as he made his way through the rookeries of Liverpool, Glasgow, and Dublin, where he witnessed firsthand how unemployment turned laboring men into animals: "This, by Despair, bred Hangdog, dull; by Rage, Manwolf, worse; and their packs infest the age."

Medievalism can also be seen in the work of 20th-century artists, including the Anglo-Welsh poet David Jones, whose long poem about the trenches, In Parenthesis (1937), received high praise from Eliot, Auden, and Evelyn Waugh. Alexander shows how controversial Jones' take on the Great War was. In refusing to see it as pointless, Jones cited his Roman Catholic faith, to which he converted after the war. Here was a medievalism that was in deadly earnest:

Though the point may not have been evident to those who fell, their sacrifice is presented as not without meaning. The kind of heroism implied is not especially valorous, more a question of putting up with things—Milton's "the better part of patience and heroic martyrdom," where "martyr" means "witness." The cause is obscure, the motive is a sense of duty rather than the need to resist Prussian militarism; and the kind of Christianity implied is of the most inclusive sort. Jones' notion of the Catholic Church was that it included "many chaps who did not know that they were in it." … The broken texture of In Parenthesis, its relapse into prose, is related to the intense strain of finding any formal analogy in human and sacred history to the dire actuality of a subject matter which did not easily yield sense, still less grandeur. Yet the soldiers of the First World War were not the first soldiers, or men or women, to feel themselves godforsaken. On the cross, Jesus himself repeated the opening of Psalm 22, traditionally attributed to King David, of a thousand years earlier: "My God, my God, why hast thou forsaken me?"

Alexander's book is primarily a work of literary criticism, but he is also incisive on medievalist architecture and painting, particularly Millais' "Christ in the House of his Parents" (1849), which Alexander persuasively judges "an unusual and rather successful painting." Depicting a boyish Christ with his family in a carpenter's shop, the painting entirely eschews the glamor that we find in Burne-Jones. The simplicity of the scene is underscored by the simplicity of the technique, which nevertheless appeals by its very unpretentiousness. But this was not how it was seen by contemporaries:

A popular magazine described Millais' Jesus as a "hideous, wry-necked, blubbering, red-haired boy in a night-gown," and his mother as a woman "so horrible in her ugliness … that she would stand out from the rest of the company in the vilest cabaret in France or in the lowest gin-shop in England." This attack on modern medieval art was written, not in an outraged Letter to the Editor, but by the magazine's Editor himself, Charles Dickens.

Dickens' critique exemplifies how the merits of medievalism would be disputed. Even Eliot, in his polemical youth, charged Chesterton's "The Ballad of the White Horse" (1911), surely one of the triumphs of medievalism, with deadening English poetry. Yet only captious readers would dispute the merit of Michael Alexander's book. Deeply researched and stylishly written, Medievalism is an unalloyed delight that will instruct and amuse a wide readership.

Edward Short is completing work on a book about John Henry Newman and his contemporaries, which will be published by Continuum.