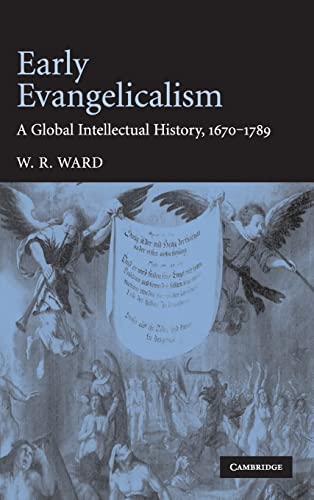 Mysticism. The Kabbalah. Alchemy. Paracelsianism. These aren't subjects that one usually associates with evangelicalism. But according to W. R. Ward, emeritus professor of Modern History at Durham, historians will have to master a new vocabulary if they want to understand the rise of the global evangelical movement in the 17th century. In his pathbreaking book Early Evangelicalism: A Global Intellectual History, 1670-1789, Ward offers a bold new genealogy of evangelicalism that transforms our understanding of its intellectual roots. Although he modestly describes his book as a "set of compass-bearings" rather than a full, textured history, it is one of the most ambitious books about evangelicalism ever written. Surveying the 17th- and 18th-century history of evangelicalism across the globe, he proposes a new framework for understanding the early movement.

In his opening pages, Ward argues that the scholarship on the evangelical movement has been marked by three shortcomings: it does not date the origins of evangelicalism early enough; it focuses on England and America to the exclusion of the rest of the world; and it does not offer a coherent picture of "evangelical identity." Building on his earlier work,[1] he argues that evangelicalism was a global intellectual movement whose influence extended from Germany to Great Britain, Silesia, Switzerland, the Netherlands, and the American colonies. In contrast to historians who have equated the birth of evangelicalism with 18th-century revivalism, he argues that the roots of the evangelical movement extend all the way back to the 1670s, when Lutherans in Germany and Reformed Protestants in Switzerland, Germany, and the Netherlands struggled to replace a dry, rational orthodoxy with a more vital, heart-centered religion. In his most original contribution, Ward argues that the earliest evangelicals drew on an eclectic assortment of religious ideas in order to offer answers to the most pressing religious problems of their day. Early evangelicals, he argues, were linked not only by their hostility to systematic theology but by their interest in Paracelsian thought, their organization of small groups, their postponement of the apocalypse to the "middle distance," their mysticism, and their fascination with the Jewish Kabbalah.

Ward begins his story by tracing the development of evangelicalism in reaction to 17th-century Protestant "Orthodoxy." As both Lutheran and Reformed thinkers tried to create systematic theologies by drawing on Aristotelian logic, a small group of dissenters began to clamor for a more personal, heartfelt faith. Among the Lutherans, Johann Arndt (1585-1621), a German theologian, argued that doctrine was less important than "improvement of life." Arndt's True Christianity, first published in 1605, went through 95 editions and was translated into ten languages (including Danish, Russian, and Icelandic) before 1740. Arndt not only influenced Philipp Jakob Spener (1635-1705), who tried to reform the church by preaching an interior faith, but also Spener's protege, August Hermann Francke (1663-1727), who became famous for the many charitable and educational institutions he founded at Halle. Similarly, among the Reformed, Gisbertius Voetius (1589-1676) and Johannes Coccejus (1603-69) in the Netherlands and Friedrich Adolf Lampe (1683-1729) in Germany tried to forge stronger bonds between theology and piety. Although these men were separated by language, geography, and theological tradition, they saw themselves as part of a common movement. Cotton Mather, for example, an American Puritan, corresponded with Franke, a Lutheran Pietist.

According to Ward, early evangelicals shared a common "thought world" that stood in opposition to the scholastic, Aristotelian character of Lutheran and Reformed Orthodoxy. First, evangelicals were attracted to the thought of Theophrastus von Hohenheim, more usually known as Paracelsus (1493 or 1494-1541), a medieval Catholic doctor who echoed hermeticists and alchemists by claiming that all matter was animated by a secret, vital force: there was a basic life force that linked the human body to the larger universe in a corresponding relationship. As Arndt explained, drawing on a medieval commonplace, God revealed himself not only through Scripture but also through the book of nature. "The misuse of astrology is to be opposed," he wrote, "but the heavenly bodies do have influence on our life. God works through nature and Christ pointed to the signs of the heavens. The great stars often bring great changes." Although Paracelsian thought was eventually discredited, many evangelicals found it appealing because it offered a view of the universe that was "scientific" without being mechanistic or materialist.

Second, early evangelicals were also linked by their interest in the Jewish Kabbalah. Influenced by Pico della Mirandola (1463-94), who claimed that the Kabbalah revealed the essential similarities between Christianity and Judaism, German pietists like Arndt, Jakob Böhme (1575-1624), and Spener embraced the Kabbalah in their search for true religious wisdom. (Spener denied being influenced by kabbalism, but as Ward astutely points out, his famous book, Pia Desideria, seems to echo the kabbalistic emphasis on the "piety of the heart.") Because the kabbalistic belief in "emanations from the Godhead" seemed to point toward the Christian doctrine of the Trinity, many evangelicals did not see any tension between their Protestantism and their dabblings in Jewish esoteric thought.

Third, early evangelicals immersed themselves not only in Jewish mysticism but in Catholic mysticism as well. Beginning with Arndt, who was fascinated by medieval mystics like Meister Eckhardt and Bernard of Clairvaux, evangelicals found themselves drawn to the mystics' evocative descriptions of personal and immediate religious experience. Two controversial female mystics, Antoinette Bourignon (1616-80) and Madame Guyon (1648-1717), became especially popular among evangelicals who were searching for closer union with God. Even Jonathan Edwards (1703-58), who had no sympathy for the Roman Catholic Church, echoed this mystical strain of piety. According to Ward, Edwards' lyrical descriptions of his personal religious experience "could sound like the Catholic descriptions of the mystical ladder to God." Similarly, even though evangelical leaders like John Wesley (1703-91) and Count Nikolaus Ludwig von Zinzendorf (1700-60) expressed ambivalence about mysticism, they still echoed the mystics' faith in personal religious experience.

Fourth, early evangelicals were linked by their desire to revitalize lay piety through small religious meetings. In Germany, Spener created house groups to discuss sermons or devotional literature, and in America, both Increase Mather (1639-1723) and his son Cotton Mather (1663-1728) urged their congregations to form religious societies. As Spener discovered when some members of his congregation began expressing heretical opinions, allowing lay people to meet by themselves was potentially dangerous. But by the 18th century, small meetings had become a common feature of evangelical life.

Finally, early evangelicals shared a tendency to imagine the end times in the "middle distance" rather than the immediate future. Instead of urging people to prepare for a dramatic and violent apocalypse, Spener and Zinzendorf claimed that the end was near, but not imminent. By postponing the millennium, they tried to encourage people to focus on religious activism in this world while still insisting that Christ would eventually return to earth.

All of these ingredients were part of the new religious movement that evangelicals forged in the late 17th century, Ward contends, but the synthesis was short-lived. By the end of the 18th century, the "old" evangelicalism had disintegrated because of the rejection of Paracelsianism and the collapse of the mystical tradition. (Ward claims that mysticism was killed not only by papal persecution but also by routinization. When universities began to create chairs in mystical theology, mysticism lost its appeal as a spontaneous movement offering a direct experience of God.) The decline of Paracelsianism was especially damaging because evangelicals were unable to find an adequate substitute for it. Without an understanding of the universe that was both religious and scientific, evangelicals lost their intellectual depth and coherence. In response, Friedrich Cristoph Oetinger (1702-82) tried to create a new religious system that was inspired by mysticism and alchemy, but he failed. "Parts of the evangelical mix were pulling apart," Ward writes, "going overboard on this or that item, and losing that mutual respect which had been one of the better features of the movement in its earlier days." The evangelical movement splintered as leaders like Emanuel Swedenborg (1688-1772), Johann Kaspar Lavater (1741-1801), and Johann Heinrich Jung-Stilling (1740-1817) ended up "grossly inflating the importance of particular elements in it." Swedenborg claimed to see visions; Lavater tried to find evidence of God's revelation in nature by dabbling in magnetism and physiognomy; and Jung-Stilling responded to the challenge of the Enlightenment by basing his faith on his personal religious experience.

Ward concludes by lamenting the loss of the "old" evangelicalism. Although he is clearly not sympathetic to its Paracelsian and hermetic elements, he believes that evangelicals' failure to create a new "system" deprived the movement of its intellectual coherence. For example, he complains that Wesley's rejection of Paracelsianism did not lead him to develop a new, more compelling view of the relationship between nature and revelation. Focusing single-mindedly on redemption, Wesley never explained how it related to God's work in creation. "Wesley exemplified what came to be a characteristic of Western evangelicalism," Ward writes, "an inability to place the drama of redemption within a larger framework of thought." Similarly, evangelicals failed to present a coherent view of millennialism, with some suggesting that the apocalypse was imminent, and others, like Wesley, virtually ignoring the doctrine of the end times.

Evangelicals continued to be linked by their passionate focus on Christ, but even this, in Ward's opinion, could prove to be a weakness. "Preaching nothing but Christ and him crucified was satisfactory as long as the hearers found in this an immediacy they did not find in broader structures of the faith. Backing favourites among the persons of the Trinity would not, however, always satisfy." Although evangelicals had inspired many ordinary believers by rejecting Protestant Orthodoxy, they ultimately failed to provide an intellectually coherent framework for their faith. Future evangelicals would  be quite successful in spreading the gospel around the world, but the "new" evangelicals shared little with the old. Taking the movement in new directions, they destroyed the former unity of the movement by organizing themselves around "fragments of the evangelical past."

Although Ward does not discuss the works of other historians in depth in his text, his book can be read as a challenge to David Bebbington's influential analysis of the rise of evangelicalism. In an argument that has been echoed and expanded by many historians, including Mark Noll, D. Bruce Hindmarsh, David Hempton, Frederick Dreyer, and myself, Bebbington claimed that "the Evangelical version of Protestantism was created by the Enlightenment."[2] In contrast, Ward dates the emergence of evangelicalism earlier, and he views the driving force in the rise of  evangelicalism as the desire for heartfelt piety, not the Enlightenment. Since his argument is a compelling one that is supported by extensive archival research, future historians will have to think more deeply about the relationship between evangelicalism and the Enlightenment. They will also have to consider how the "new" evangelicalism relates to the "old."

In addition, historians will have to grapple with the question of the relationship between evangelical leaders and the laity. Because Ward has written an intellectual history that focuses exclusively on "top-drawer evangelicalism," it is not clear how his story relates to ordinary believers. Did they share their leaders' ideas (or understand them)? As Ward suggests at the end of his book, his portrait of early evangelicalism would look less intellectually coherent if he considered the stories of the faithful who filled the pews. This, however, was not his project, and Ward's strengths as an intellectual historian are unsurpassed. Although this book is probably too challenging for casual readers, scholars of evangelicalism will find it well worth the effort.

Catherine A. Brekus is associate professor of the history of Christianity at the University of Chicago's Divinity School. She is the editor of Women and American Religion: Reimagining the Past, published earlier this year by the University of North Carolina Press.