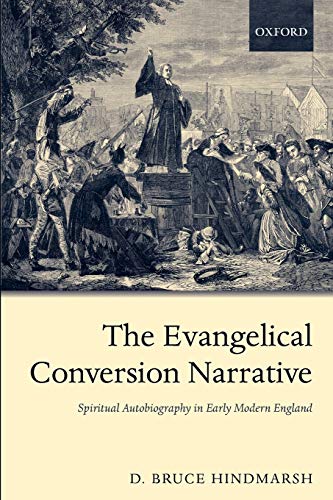 Nothing in My Hands I Bring

Evangelicals are fascinated by conversion stories. Witness the continuing popularity of Charles Colson's Born Again! (republished in 2004), and C.S. Lewis' Surprised by Joy (1966); both books are read and reread long after the events that gave rise to the written narrative. D. Bruce Hindmarsh, in The Evangelical Conversion Narrative: Spiritual Autobiography in Early Modern England, explains why. Conversion narratives supply evangelicals with a foundational sense of identity as well as a point of view from which they can articulate the entire scope and span of their lives.

Hindmarsh traces the emergence of the evangelical conversion narrative from its inception among the 17th-century Puritans, through the efforts of the Wesleys and Whitefield, as well as their followers and successors, to the end of the 18th century. Along the way he takes the reader through a rich and variegated tapestry of evangelical autobiographical literature. He concludes, and I think rightly, that these narratives show, on the one hand, how 18th-century evangelicalism participated in the increasingly individualistic spirit of the age but, on the other hand, found its identity in the communion of saints and the word of the gospel: "modern" in one sense, but decidedly "not modern" in another. Hence Henry Rack's description of John Wesley as a Reasonable Enthusiast (1989).

Like David Bebbington, whose Evangelicalism in Modern Britain: A History from the 1730s to the 1980s (1989) has shaped the subsequent conversation, Hindmarsh views evangelicalism as being essentially "conversionist" in nature. Hindmarsh expands the picture significantly, however, by exploring conversion not only as the gateway to vital piety but also as a source of individual identity and as a way of looking at a person's whole life. Considered thus, conversion becomes the lens through which 18th-century evangelicals understood themselves and their lives.

When, at the outset, Hindmarsh traces the antecedents of the 18th-century movement, he is in tacit conversation with Bebbington, stretching the latter's conception of "evangelical" back to the 16th-century reformations and the 17th-century narratives of the English Puritans, most of which were shaped by William Perkins' "Golden Chain" of salvation. With these earlier narratives in mind, one suspects that enthusiasm over evangelical conversion in the 1730s—well demonstrated by Bebbington—was not as novel as we have supposed but was rather a revitalization of what had transpired earlier.

The lines of connection between the 18th-century evangelicals (like the Wesleys and Whitefield) and the Puritan divines, with respect to conversion narratives, are readily drawn. The Wesleys read the Puritans, and during their collegiate years, as "Oxford Methodists," they sought to emulate the holy lives of earlier spiritual writers. What was most distinctive about the 18th-century conversion narratives was the readiness of the evangelicals to see themselves as a part of a larger, conversion-based mass movement. As Hindmarsh observes: "the experience among the eighteenth-century evangelicals can be distinguished from the earlier Puritan experience, in part, by the new social space it inhabited, a space defined by an accelerated and continuous traffic in commodities and news." This gave the later narratives an "audience-oriented subjectivity"; the narrators of the conversion stories were consciously shaping public opinion, and self-consciously participating in an established genre of evangelical witness.

This theme is further developed in chapter 3, "The Early Methodist Journalists: George Whitefield and John Wesley."  There Hindmarsh correctly asserts, "The early Methodist evangelists not only kept confessional diaries as an aid to devotion, like the Puritans, but they also wrote and published journals in order to stimulate, direct, and defend the growing evangelical movement and to legitimate their own leadership." The net result of the publication of all this autobiographical material—and there was a huge amount of it!—was transformative: "Though conversion might be experienced as an interior or private event, it was now occupying a significant public space." Not only did the published journals of the Wesleys and Whitefield represent a studied, apologetic attempt at defending the evangelical movement, they had the further role of establishing a carefully crafted public identity for the movement and its chief movers. Not only were the journals of Whitefield and Wesley responsible for directing the course of the revival; by describing conversion experiences they also imparted the experience to their readers. The published journals, then, did much to establish a common language of experience and genre among 18th-century evangelicals.

In chapter 4, "White-Hot Piety: The Early Methodist Laypeople," Hindmarsh looks at the lives of common laypeople. Charles Wesley, among others, solicited and collected conversion narratives, and his personal collection of these unpublished conversion stories forms the basis of this chapter. Not only do these stories allow the reader to step behind the carefully crafted public personas of Whitefield and Wesley, they also sugget that the white-hot emotion that the evangelists experienced and preached was readily communicated and replicated by those who heard them preach. The "Christ for me" voice of these laypeople, who found relief for their souls through repentance and faith in Jesus Christ, does not mute the keen sense of community that also extends through these accounts. The writers found their new identity within the context of an experience that was a constitutive feature of their religious community. (A striking feature of these narratives is the persuasiveness of women as witnesses—to other women, but also to men.)

Hindmarsh next walks the reader through the Methodist-Moravian controversy, which resulted in a schism between the two evangelical movements and a division of the Fetter Lane Society. He argues, plausibly, that this schism is best understood as a dispute about the nature of conversion: the Methodists tended towards an "agonistic" travail of the soul in repentance and new birth, while the Moravians stressed a quiet self-yielding and contemplation of the cross of Christ. Both the Methodists and Moravians replicated their traditions by developing conversion narratives that evidenced their theological context and perspective.

Our next stop is at the Cambuslang revival (located five miles southeast of Glasgow, Scotland), which showed that evangelicals—particularly those of a Reformed perspective—had a high degree of biblical literacy and persistently used biblical events and people to describe their own experiences. Not surprisingly the Reformed theology of these narratives distinguished them from their Wesleyan counterparts. In a similar way, John Wesley's published lives of the early Methodist preachers not only reflect Wesleyan-Arminian theology but also the fact that now (by 1779) the conversion narrative had become a full-scale spiritual autobiography. Here the Wesleyan experience of entire sanctification, culminating in a "good" death, was often narrated as a kind of conversion.

Turning to the "The Olney Autobiographers," John Newton, William Cowper, and Thomas Scott, who "lived near one another in the north-eastern corner of Buckinghamshire,"  Hindmarsh shows how the genre of the conversion narrative was flexible enough to allow for the discovery and expression of their individual personalities.  Indeed, he concludes that these writers' "vivid display of personality occurred not despite the presence of a model, but because of it."

In "The Seventeenth Century Reprised," Hindmarsh charts the course of conversion narratives among evangelicals of the "gathered church" perspective (e.g., Baptists and Congregationalists). Conversion narratives, either written or oral, became a part of a person's petition to join a "believer's church"; as Hindmarsh tersely puts it: "No narrative, no admittance."

In his final chapter the author first looks at conversion in non-Western social contexts: among the Delaware Indians, with David Brainerd; in Sierra Leone, with David George; and in the South Sea Islands. In Tahiti, there were many conversions but no narratives, in large part due to the absence of Western individualism; the other two examples roughly follow the same pattern. Another contrast is provided by the emergence of modern, secular consciousness, as exemplified by James Lackington's "Unconversion narrative" in his Memoirs (1791), in which he repudiated his earlier evangelical (Methodist) conversion and presented himself as an autonomous, "self-made man." But by 1804, when he was sixty years old, Lackington had another book to write, The Confessions of James Lackington. It was a thoroughgoing retraction of his earlier Memoirs. Moreover, he put his retraction into action not only by returning to the Methodists but also by endowing three chapels and becoming a Methodist lay preacher. Hindmarsh concludes:

Within his own life time, James Lackington came to realize that the modern self was insupportable. Given the many voices today calling for the decentering, deconstruction, or death of the modern self, and the rejection of any essentialist notion of the self, it is surely significant that Lackington, as a pioneer of the modernist identity, shudders back from the brink and reposes in the end in the community of faith and the self-transcending word of the gospel.

This is an interesting and intriguing book, lavishly documented by primary source analysis and richly textured by the wealth and diversity of perspectives brought together under the rubric of the "evangelical conversion narrative." We can rejoice that Oxford University Press has issued a paperback edition. It is also a somewhat controversial book, which runs against the current of most cultural-historical analyses of 18th-century evangelicalism. The more typical assessment is that the evangelicals were obscurantists who clung to a medieval world of spirits and Divine action, even in the face of modern individualism and rationality. Hindmarsh gives us a very different picture of the evangelicals: standing on the brink of modernism, they combined classical Christian concerns—such as conversion—with modern individualism in a movement that captured the imagination and satisfied the needs of many people in their day. The unasked and unanswered question bequeathed to us by all this analysis is whether contemporary evangelicalism has the means and the vitality to produce a compelling narrative of evangelical experience that answers the needs and captures the imagination of a post-modern world.

John R. Tyson is professor of theology at Houghton College. He is the editor of Charles Wesley: A Reader (Oxford Univ. Press).