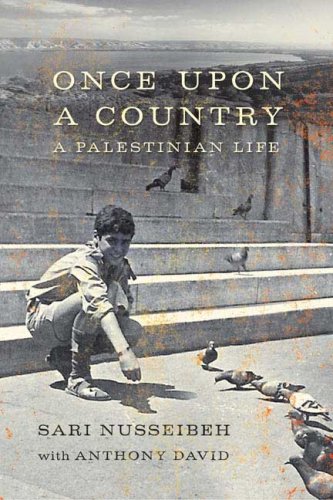 The idiosyncratic yet exemplary story of Sari Nusseibeh.
November/December 2007

As I write, the two chief political factions in Palestine, Fatah and Hamas, are engaged in a civil war, as Israel ponders helping Palestinian President Mahmoud Abbas restore order and the United States prepares to release previously impounded aid to Abbas' newly-formed government. One of those called upon to help Abbas should certainly be Sari Nusseibeh, the President of East Jersualem's Al-Quds University. He would seem to be the ideal negotiating partner both for Israel and the West. An Oxford- and Harvard-educated philosopher who cherishes the ideals of Jeffersonian democracy, Nusseibeh has already played a role in many peace efforts, both formal and informal, as well as being a clandestine leader of the first intifada or Palestinian uprising and head of the Palestinian Liberation Organization (PLO) in Jerusalem. He recounts all this and more, with the help of co-writer Anthony David, in his fascinating memoir Once Upon A Country: A Palestinian Life.

Nusseibeh's memoir allows the reader to experience the dislocations visited upon the Palestinian people by the creation of Israel, not as a loss abstractly registered but rather in a narrative that a novelist or filmmaker would envy. His family has lived in Jerusalem and elsewhere in Palestine since the Arab invasion of the 7th century, when Caliph Omar granted to the Nusseibehs the keeping of the key to the Church of the Holy Sepulchre. Nusseibehs have been opening its door each morning ever since, in a cooperative arrangement with the monks who live there. As landowners and proprietors of such businesses as the Gold Souk, the Nusseibehs were firmly established among the oligarchs of Jerusalem prior to the UN partition of 1948 that created Israel. After losing a leg in a skirmish with the Israelis, Sari Nusseibeh's father served as mayor of East Jerusalem and later as ambassador to England during the Jordanian protectorate before the Six Day War of 1967. Sari Nusseibeh grew up watching loss after loss: his mother's family's lands, and his father's olive grove, and more—all confiscated by the ever-victorious Israelis. He does not voice his outrage at these injustices so much as assume the reader will empathize and therefore find his efforts on behalf of his people right and natural.

Our identification with the Nusseibehs' plight opens the way for the author's retelling of contemporary Palestinian-Israeli history. Like all partisans, even the most generous, Nusseibeh tends to feature his enemy's misdeeds and excuse his own peoples' failings as dictated by circumstance or ignorance. He assumes that the Palestinians and their Arab allies simply could not have accepted the creation of Israel in 1948 and concentrates on the way the Israelis used their military advantages to empty their territory of its Palestinian population and consolidate their rule. He does recount some of his elders' second thoughts on this question, but the Israelis remain the true aggressor. As a young man, persuaded that the pan-Arabism of his father's generation was an illusion, Sari Nusseibeh gave his loyalty to Yasser Arafat and the PLO. While he recognizes Arafat's failings, particularly his reliance on payoffs as an organizing principle, and once fled a conference in the wee hours of the morning to avoid coming too directly under Arafat's control, Nusseibeh never questions the historical necessity of the PLO's longtime role as the Palestinians' sole political representative in peace negotiations. Yet unlike the leaders of Hamas, he believes firmly in a two-state solution and longs for the day when Palestinians and Israelis recognize what he sees as their fundamental alliance as stewards of the Holy Land. It's impossible not to want to join hands with Sari Nusseibeh and make peace.

How is this to be done? I have to admit that as someone raised as an evangelical Christian I have my tribe's sympathy for Israel and the reflex to defend her. I take seriously God's covenant with Israel and his continuing promises to his chosen people. At the same time, the Palestinians' long history in the Holy Land certainly establishes a valid counter-claim. The Kingdom of God is characterized by justice, peace, and love. It's best, I think, to concentrate on these ends being realized in Palestinian-Israeli relations and let God orchestrate history as God will.

That's a position many Westerners instinctively embrace, a vantage point from which it's hard to understand the combatants' refusal to recognize what seem to be their own best interests. A patronizing judgment? Read this memoir and make up your own mind. Surely, fifty years is time enough for bloodshed and enmity and recrimination. Let there be peace. So say the Sari Nusseibehs of the world.

But not Hamas, Fatah's Al Aqsa Brigade, and other radical Islamic groups who believe Muslims must never cease to fight for lands they once ruled. At the same time many Orthodox Jews in Israel still believe in what they call Greater Israel, and seek the annexation of additional Palestinian territory, particularly the West Bank.

I'm afraid that Sari Nusseibeh is guilty of his own wishful thinking. He tells us that "Islam is not the problem." But Islam—or rather certain strains of it—certainly constitutes part of the problem as do factions within Judaism. The problem ceases to exist if we do not have a Palestinian people seeking an Islamic state versus Israelis who believe keeping the Torah demands a Jewish state—or who find in Zionism a secular substitute for religion.

Nusseibeh's account of the 2000 Camp David negotiations in which Israel's Prime Minister Barak offered Arafat nearly everything the Palestinians had asked for underlines this point. "After all the years of fighting," Nusseibeh tells us, "[Arafat] had a chance to get most of what we needed; the rest he could have achieved by building a modern state under the rule of law. But he didn't do it." Why? Because Barak demanded partial sovereignty over the Temple Mount. He argued that the Jews should be allowed to pray on Muslim ground. This sent Arafat into such a rage that he never made a counter-offer to Barak's generous first proposal.

Both Islam and Judaism have theocratic roots, although Israel has been better able to separate church and state. As a secularized Muslim, Nusseibeh avoids talking about this entirely. His Islam is, frankly, a pretty thing of his own construction—the Night Journey of the Prophet as a metaphor for an existentialist quest; affinities between the philosophy of al-Ghazali and Avicenna and Enlightenment rationalism. During his years working on his Ph.D. at Harvard, he was profoundly impressed by Thomas Jefferson's thought. "Jefferson believed in the dignity of the moral conscience, and that human freedom was a good in itself, not needing the sanction of tradition or religious authority," Nusseibeh writes. "A revolution must have at its core belief in the moral integrity of the individual; otherwise it will inevitably degenerate into despotism."

What never comes into view is the way in which "religious authority," namely Christianity, made Jefferson's belief in moral conscience, human freedom, and the separation of church and state possible. The Enlightenment helped disabuse Christianity of its establishment tendencies, but Christianity recognized the validity of purely civil authority from the beginning. The Enlightenment attempted to separate Western values from their basis in Christian doctrine and found the task impossible, as post-Enlightenment thought eventually came to deny the idea of authority itself.

With his education Nusseibeh's personal history became enmeshed with the West's post-Christian denial of its heritage. At Oxford and Harvard he was told that rationalism and its principled disbelief created the freedoms the West enjoys. For more than 30 years he's been trying to build up his people into a nation on the basis of this lie. The West has not only blinded itself to the religious basis of culture, it has also blinded its potential allies in the Mideast and elsewhere—those thousands of young men and women who attend our universities. If only Nusseibeh had run into Christopher Dawson at Harvard and read his Religion and the Rise of Western Culture.

That's not to say that Nusseibeh does not know much of what the Palestinian people need to do to attain a just independence. One of his most far-sighted initiatives was to put together study-groups which issued reports on the many aspects of civil administration. These groups effectively provided the PLO with "shadow ministries" that could be brought forward to run the country. Nusseibeh understands that democratic government depends on democratic institutions like universities, a free press, and bureaucracies that enjoy a measure of independence from political control. Peace will only come to Palestine, it's my guess, when the Palestinians begin to govern themselves on another basis than payoffs and thuggery. Nusseibeh avoids criticizing his own people in such frank terms, but his life and his persuasive memoir embrace this remedy.

Will Mahmoud Abbas and his allies be able to incorporate the Christian principle of separation of church and state into their new government? In what circumstances can democratic institutions divorced from Christian culture trump a hostile culture? The resurgence of postwar Japan demonstrates that this can happen. May it happen again in Palestine and elsewhere in the Middle East. That key to the Church of the Holy Sepulchre would open up many treasures if the West would only invite its keepers to step inside.

Harold Fickett and Charles Colson will release The Faith: Given Once, for All in February, 2008 (Zondervan).