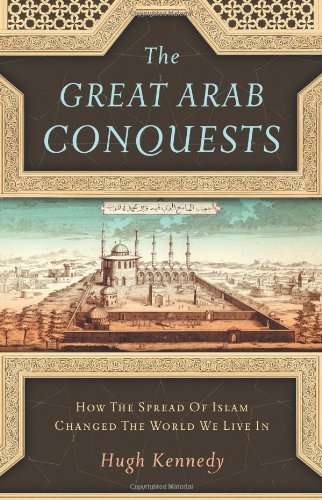 Hugh Kennedy describes the opening stages of what is arguably the most important fact in Christian history over the past 1,900 years, namely the replacement of Christianity by Islam over the Middle East and much of North Africa and Asia. If this statement seems hyperbolic, recall that at the end of the first millennium, Syria, Mesopotamia, and Anatolia still had good claims to rank as the cultural and spiritual heartlands of Christianity, and that the Church of the East—the so-called Nestorian church—was expanding enthusiastically across Central and Eastern Asia. But ultimately, the Eastern churches would succumb before the rival power of Islam, in a series of disasters that tore Christianity from its roots, cultural, geographical, and linguistic.

This uprooting created the Christianity that we commonly think of today as the historical norm, but which in fact resulted from the elimination of alternative realities. Critically, the fall of the Asian churches made Christianity much less Semitic in thought and language. A thousand years after the world depicted in the Book of Acts, some of the world's most active and dynamic churches still thought and spoke in Syriac, a language closely related to the Aramaic of Jesus' own time. They still called themselves Nasraye, Nazarenes, and followed Yeshua. Through such bodies, we can trace a natural religious and cultural evolution from the apostolic world through the Middle Ages. If there is a decisive break between the New Testament world and modern Christianity, it occurs with the fall of these churches, chiefly during the 14th century. Christianity does indeed become predominantly "European," but about a millennium later than most nonspecialists think.

Knowing as we do the end of the story—the creation of a dar al-Islam stretching from Morocco to Indonesia—it can be difficult to realize what a startling historical departure it represented, in a world that seemed set for Christian, rather than Muslim, conversion. In The Great Arab Conquests, Hugh Kennedy describes and convincingly analyzes the astonishing story of how the Arabs took over the Middle East. Beginning around 630, Arab forces burst initially into Syria and Mesopotamia, and then into Egypt and Persia. By 651, the Arabs had conquered the Persian Empire, which then stretched deep into the "stans" of Central Asia, and they were already pushing into Roman North Africa. Carthage fell in 698, Spain followed after 711. In 751, Arab forces defeated the Chinese in the struggle for Turkestan.

Why were they so successful? Muslims knew, of course, that God was guiding their victories, and many Eastern Christians agreed. For the large majority of the Syrian and Egyptian Christians who belonged to sects condemned by the Byzantine Empire, the Nestorians and Monophysites, the Arabs were evidently God's scourge in the chastising of the vicious Orthodox regime. Kennedy offers other, more secular, explanations, above all the mutual devastation through which the Byzantine and Persian Empires had so weakened each other over the previous two centuries. And far from being crude barbarians crashing ignorantly into this alien world of civilization, the Arabs had ancient contacts with both Persia and Byzantium. These linkages are suggested by the extensive network of Christian bishoprics and shrines that stretched from southern Iraq deep into the Yemen. (Incidentally, Kennedy's maps are excellent.) The Arab leaders were skilled and worldly-wise, quite sophisticated in the ways of the civilized empires, and they made excellent use of diplomacy as needed. By the end of the book, we are much less inclined to see the Arab conquests as a near-miracle, but rather as something close to a foregone conclusion, and that shift of perception is vastly to the author's credit.

Kennedy summarizes his argument thus: "In the final analysis, the success of the Muslim conquest was a result of the unstable and impoverished nature of the whole post-Roman world into which they came, the hardiness and self-reliance of the Bedouin warriors, and the inspiration and open quality of the new religion of Islam." Significantly, his very plausible list of factors ends rather than begins with the motivating power of Islam. His book gives no support to those who see the story of Islam as an incessant tale of bloodshed and massacre in the guise of holy warfare, and he is very fair in quoting contemporary observers who saw both the good and bad sides of the new regime. Christian critics easily distinguished between those Arab rulers, like the Caliph Yazid II, who were monstrous tyrants, and the others who were decent and just. The Arabs varied enormously in their treatment of Christians, Jews, and other conquered peoples, and it is hard to generalize over the whole region. As Kennedy notes, however many people may have disliked the new regime, few moved to active resistance: "The fragmented nature of the response of the conquered was an important reason for the success of the Muslims, both in the initial conquest and in the consolidation of their rule."

Critically too, it is useful to be reminded that most contemporaries saw their new masters as a social or ethnic category, rather than a religious movement. In Mesopotamia, the central political division was not between Muslims and Christians but rather between Arab masters and Suriani [Syrian] subjects, and the latter happened to be Christian. In Egypt, Arabs confronted a majority of Copts, that is, native Egyptians. This was an Arab conquest, rather than a Muslim one. Indeed, Kennedy devotes surprisingly little attention to acknowledging the widespread modern theories suggesting that Islam emerged as a separate religion decades later than the official accounts say, and that the first Muslims located themselves on the same theological spectrum as Christians and Jews. This question about the nature of Arab religious identity during the first wave of conquest is of course vitally important, as it would have affected the attitudes of the conquered nations, in which Muslims remained an élite minority for at least for two hundred years after the initial takeover. Whatever the real roots of Islam, Kennedy reminds us how open the early conquerors were to using non-Muslims as administrators, especially under the Umayyad dynasty that held power from 661 to 750.

Also making the transition of power easier, it was far from obvious for the first two centuries that the Arab conquest would mark a permanent transformation, rather than a passing phase: countries like Syria and Egypt were well used to transient empires. History also suggested that the Roman Empire tended to strike back very successfully against intruders, even though retaliation might take centuries. Of all the barbarian invaders who had seized portions of the Western Empire in the 5th century, the Byzantines conquered or expelled some, while the others all accepted Catholic Christianity by the 8th century. After seeing the Persians overrun their whole Eastern Empire by 616, the Romans had staged a stunning comeback in which they in turn destroyed Persian power. Even when Roman armies were not obviously in the neighborhood, the empire had an impressive ability to project its power through allies and proxy states, making great use of diplomacy and intelligence. The Muslims suffered a traumatic setback in 717-18, when the Byzantines threw them back from the approaches to Constantinople. Adding to the shock, the Romans owed their victory to their secret weapon, Greek Fire, a kind of napalm that wrought havoc with enemy ships, and which must have had a daunting effect on apocalyptically minded Muslims. Hadith composed about this time suggest real concerns that a revived Byzantine and Christian power might be able to roll back Islam to Mecca and Medina. As late as the 10th century, these prophecies seemed on the verge of fulfillment when the Byzantines reoccupied most of Syria and northern Mesopotamia and approached the gates of Jerusalem and of Baghdad itself. They were stopped only by the manpower shortage that was the eternal curse of later Rome.

As Kennedy has written so extensively on later Islamic history, we can scarcely fault him for ending the present book in the eighth century, and on something like an optimistic note. The great age of conquests was largely completed, the subject peoples were accommodating to the new regime, which for many was scarcely more oppressive than the older Roman or Persian states. But a note of caution is in order: historians of Islam differ substantially on just when and how the subject peoples accepted the new faith. Kennedy follows those who see the conversion as an early and fairly easy transition: Islamization and Arabization were "a gradual, almost entirely peaceful result of the fact that more and more people wanted to identify with and participate in the dominant culture of their time." To say the least, that is a very optimistic statement, which is hard to reconcile with the continued existence of mass Christian populations across the Middle East in the 13th and 14th centuries, or with the brutal persecutions that they suffered in those years. The Great Arab Conquests does a splendid job of showing how the core territories of early Christianity fell under Muslim power; but the decline and ultimate collapse of the older faith in the conquered regions demands much more detailed examination.

Philip Jenkins is distinguished professor of religious studies and history at Penn State University. He is the author most recently of God's Continent: Christianity, Islam, and Europe's Religious Crisis (Oxford Univ. Press).