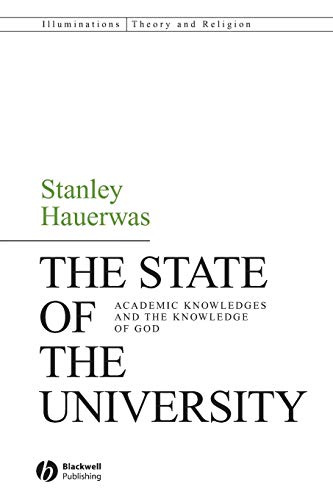 The State of the University: Academic Knowledges and the Knowledge of God
Stanley Hauerwas
Wiley-Blackwell, 2007
232 pp., 54.00

What's a university for?
November/December 2007

Since the 19th century, much ink has been spilt attempting to "justify" theology as a legitimate discipline in the "modern university." Gone are the glory days of 13th-century Paris, theologians have conceded, but surely a chastened theology deserves a place at the table with other academic fields. A quiet dignity for the erstwhile queen of the sciences might consist precisely in her voluntary dimunition and willingness to "play by the rules" of the university at large. Or so some have argued.

The Barthian revolution in theology excoriated this line of reasoning, even as it happily burned many bridges to the 13th century. Barth thought that theologians ought to quit fretting about their institutional share and attend to the actual tasks of theology, which he regarded as inseperable from the mission of the church. Paradoxically, the practice of theology in service to the church, not its success at academic legitimation, gave theology a voice in the university, if no absolute right of residency. But theology should never settle for being a normal member of the academic community; it functioned as a "signal of distress," a flashing siren this side of modernity proclaiming the crisis of mortal existence and the indefectible love of God.

Few contemporary theologians have taken Barth's advice to heart quite like Duke Divinity School's Stanley Hauerwas. Those who rue the Barthian-Hauerwasian line in modern theology might be tempted, after picking up this book and then quickly setting it aside, to quip with Marx that history tends to repeat itself, the first time as tragedy, the second time as farce. But this would be to forfeit the probing insights, and pleasures, of hearing a first-order theological provocateur as he turns his sights on one of the most influential institutions in modern society: the university.

Like many of Hauerwas' works, this is a collection of writings and addresses prepared for disparate audiences. It is a "book" because Hauerwas says it is; but enough chapters hang together to provide an overall sense of coherence—and the chapters that dangle make for lively reading. The idea for this volume originated in his Gifford lectures, published as With the Grain of the Universe: The Church's Witness and Natural Theology, where Hauerwas began to examine what his appropriation of Barth's account of "natural theology" entailed for the types of knowledge found in the modern university and the relationship of Christian theology to them.

Critics have long charged that Hauerwas' theological accents and modus operandi encourage a "sectarian" withdrawal from the world, not an engagement—especially not a serious and sustained cognitive engagement—with it. Hauerwas picks up the gauntlet: "The burden of the argument of this book, indeed, of everything I have written, is to challenge that presumption by suggesting that theology is a knowledge that should rightly be represented in the curriculums of a secular or a church-sponsored university." Or, in a more Barthian vein: "[T]heology should never be done to pass muster in the university. Theology must be done to glorify God … . It has always been my conviction that when theology is so done, those in the university will take notice because what we have to say is so interesting."

If Hauerwas argues that theology deserves representation in the university, he can't be accused of flattering the institution he seeks to engage. Indeed, his criticisms of the extant university seem to overpower his constructive efforts to state why theology deserves a hearing. But one might construe this as the point: theology deserves a hearing because if its practitioners do what they should, they are able to raise the difficult questions and level the stinging criticisms that members of other disciplines—and proliferating subdisciplines—have neither the ability nor will to do.

Worrying about disciplinary specialization itself serves as a case in point—something Hauerwas does quite well, even if he is not alone in this effort. Narrow financial and professional interests, he writes, render it "crucial that the university insure that learning be organized not to be a conversation among disciplines, but rather that disciplines be organized as competing opposites. As a result, accountability is lost." Even Christians today are duped to regard their own texts—say Milton or Dante—as belonging to a "field" called "literature" rather than as works that speak to our common humanity as creatures of God. Instead of working against the downsides of specialization, theologians too often transmit them. While individual expertise is no evil, Hauerwas insists that "theology only makes sense as a discipline of the church," and this higher loyalty places both demands and limitations upon specialization. At the very least, Hauerwas humorously notes, "the disciplinary divisions that invite theologians to say, 'I cannot comment on X or Y because scripture is not my field,' must come to an end."

Moreover, specialization too often serves the interests of the state. If there is a villain in Hauerwas' account—indeed, in his entire theology—it is "the modern state," purveyor and beneficiary of the ideologies of secularism and liberalism. The book's title is in fact  a double-entendre meant to convey just how much modern universities have become creatures of the state. As such, universities willy-nilly legitimate a secular understanding of time, knowledge, and freedom (liberalism broadly understood) profoundly at odds with the church's countervailing conceptions of time, knowledge, and freedom. Today, Hauerwas writes,

He ably points out the disparity between liberalism's progressive understanding of time that shrinks in abject horror from human mortality (think of the academy's enthusiasm for genomics) and a church that tells people at the beginning of Lent that we are dust and to dust we shall return.

Hauerwas bristles at the contemporary university's putative universalism. As products of the Middle Ages, universities were originally universal in the sense that they expressed the catholic mission of the church. (Those receiving doctorates in fact possessed the legal prerogative of ius ubique docendi, the right to teach anywhere in medieval Christendom.) While shedding no tears for Christendom, Hauerwas views the diminished universalism of the contemporary university as coextensive with the rise of the modern nation-state, the powers of which grew to the extent that the state absorbed forms of localism and particularism into its ambit and drowned Christianity's more demanding pronouncements under an ideology of liberalism.

And it is in the local, Hauerwas insists, that the genuinely catholic mission of the church—and the academy—is best retained. He develops this point in a chapter conversing with Wendell Berry and in another entitled, "Pro Ecclesia, Pro Texana"—both of which bear witness to a certain frontier-cum-Southern-agrarian ethos that suffuses his thought and gives it its salty edge.

Many of Hauerwas' claims merit assent, few require outright dissent, some invite constructive criticism. If I may hazard the latter, one is struck in this book, and in his other writings, by the sheer size of the categories that Hauerwas inveighs against—"the modern state," "Constantianism," "America," "civil religion," "liberalism," "Christendom," "capitalism," "individualism," and so forth. Put differently, Hauerwas is a "lumper" not a "splitter"—predisposed to lump even slightly similar phenomena into capacious categories, which in turn earn either praise or indictment from the theologian's prophetic office.

One might cherish the theologian's prophetic office while maintaining that its beauty shines more brightly coupled with discriminating sociological and historical analysis. In my (more limited) office as a historian of the modern university, I wonder if Hauerwas' contention that the "modern state" has sucked the lifeblood from the university bears a deficit of this discrimination. In particular, his (theological) account of the nation-state at times lumps so sweepingly that it ignores crucial differences in the various political arrangements and outcomes of modernity.

One observes, for example, a salient difference in the effects of state formations on higher education in North America and in Continental Europe. Hauerwas' arguments apply well to European realities, but less so to those in North America. More than a few modern-day Tocquevilles have been struck by the relative freedom and diversity of higher education in this country: private Ivy Leagues, church-related colleges, denominational seminaries, community colleges, diversely funded foundations and think tanks, massive educational philanthropies, independent liberal arts colleges, and so forth. The creeping reach of the state (and unsavory aspects of the market) on these institutions should be a genuine cause of concern, but the enduring existence of this diversity, in contrast to a more statist Europe, should not be elided in the headlong rush to prophetic lamentation.

Hauerwas' own professional path—Yale (private Ivy), Augustana College (Lutheran), Notre Dame (Catholic), and now Duke Divinity School (Methodist)—bears witness to a vocational trajectory, and a heady theological cross-pollination, improbable in many other countries where the state has had more homogenizing, secularizing effects on education. At the very least, let theological prophets and provocateurs alike consider sparing our Republic a few lashings for its artful midwifery in rendering prominent the very distinguished, very distinctive mind of Stanley Hauerwas.

Thomas Albert Howard is associate professor of history and directs the Jerusalem & Athens Forum at Gordon College in Wenham, Massachusetts. He is the author of Protestant Theology and the Making of the Modern German University (Oxford Univ. Press).