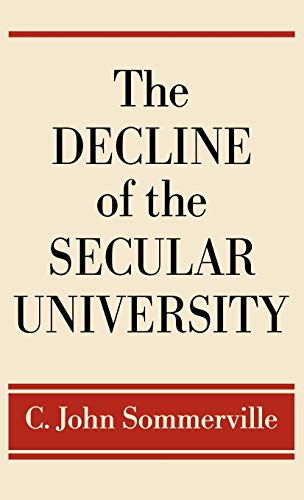 The Devil We Know?

Get ready for the "postsecular" university.

Academics are not certain of what lies ahead, but we are certain we are passing from one epoch into another. Such a transition is entailed by the decline of the secular university, as deftly sketched by C. John Sommerville, Emeritus Professor of History at the University of Florida. The confidence colleges and universities once possessed concerning their identity and their requisite "business" is collapsing into circles of ever-intensifying debate. Public officials now seek accountability for the investment of tax dollars. Industry leaders expect responsiveness in relation to the needs of an ever-changing economy. Parents simply hope for a day when their sons and daughters will not return home and take up residence in their basements following commencement.

And yet amid the profound changes sweeping the academic world, Sommerville observes, "the public still has a sense that universities should be wiser than the rest of us." He wonders why. After all, "universities are not really where we look for answers to our life questions." Secularization, he contends, has precluded universities from raising such inquiries, let alone offering satisfactory answers. While Sommerville believes the next epoch for the university will prove to be better than the current one, I wonder if the proverbial devil we know is not, in fact, better than the devil we have yet to meet.

Few scholars are better prepared than Sommerville to help us understand not only the epoch we are leaving behind but also the one which lies ahead. The Decline of the Secular University is his seventh book; among his earlier ones are How the News Makes Us Dumb (InterVarsity, 1999), The News Revolution in England (Oxford, 1996), and The Secularization of Early Modern England (Oxford, 1992). And his efforts with the Christian Study Center in Gainesville, Florida, have surely helped to shape his latest book, as the stated purpose of this center is "to offer the university community the thoughtful consideration of a Christian ...