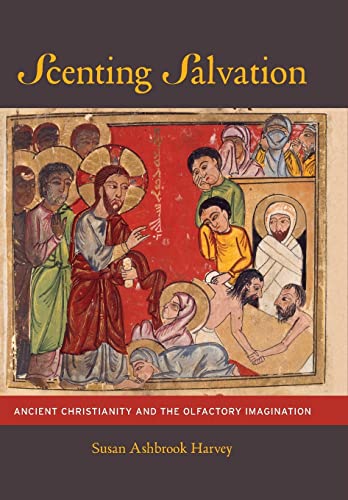 Aromatherapy: I'm not sure when the word was coined, but it came into vogue in the last decade. From Harris Teeter to the Body Shop, groceries and specialty shops do a brisk trade in scented candles, lotions, and bath gels. At the end of a day spent squinting at your computer, you can rest your tired eyes under a clove-scented eye mask. I confess to spritzing a little lavender sheet spray on my pillow before turning off my lamp at night.

These scented goods promise not only olfactory pleasure but spiritual and personal transformation. "2 New Aromatherapy Blends" from Bath and Body Works will "Give your mood a makeover." "Because scent is at the center of a calm mind" you should purchase Lavish Aromas Aromatherapy Pillows. According to aromatherapy expert Francoise Rapp, the combination of rose, patchouli and orange can "Awaken … Your Sense of Self." Comfycountrycreations.com hawks scented neck pillows, which will not only "give relief to sore, aching muscles" but also "soothe … the soul."

It's not just New Agers who are interested in scent. Bob and Karen Tosterud have created a line of Christian candles called His Essence. The Resurrection candle is based on Nicodemus' myrrh and aloe (see John 19:39-40); the servanthood candle was inspired by the nard Mary poured on Jesus' feet in John 12:3. These candles are billed as "creations to comfort the soul," and the Tosteruds hope the candles will help those who light them "Sense Him in a new way."

The spirituality of smell may be trendy, but it is not new. Scenting Salvation, Susan Harvey's fascinating and engrossing study of the place of smell in the early church, makes clear that scent and smelling have long been understood as crucial pieces of the Christian spiritual life.

Scenting Salvation creatively and insightfully reframes important debates. Just how world-renouncing was asceticism? How did early church figures, from Augustine to Chrysostom, think about the body? What is the relationship between the development of Christian piety and Christianity's imperial location?

And implicit in Scenting Salvation is also a word to contemporary Christians. When New Age aromatherapists direct our attention to the sense of smell, they may be on to something. Yet the aims of aromatherapy are not identical with the theories of smell articulated in the early church. Modern-day aromatherapy promises to help us relax, find inner peace, and get in a good mood. None of those is a bad goal, of course. But the Christian tradition suggests sensory engagement has fruits beyond relaxation. Rather than sniffing to retreat into a pool of calm, we smell in order to engage creation, and, finally, to know God.

Harvey's entry point into Christian smelling is the well-documented embrace of incense in Christian worship. Until the late 4th century, Christian writers denounced incense. This suspicion of sensory practices was, says Harvey, part of a broader "austerity" in early church practice, one mark of marginal Christians' "general alienation from worldly (non-Christian) order." Yet by the 5th century, smell came to play a prominent role in Christian piety. Worship services became "drenched in the fragrance of incense" and perfumed holy oil took an increasingly prominent place in liturgy.

Philosophical and aesthetic theories of scent accompanied this rise of olfactory piety. Animating Christians' discussions about smell were questions about the senses and epistemology: How could Christians know one another, and how could they know the Lord? For Christians in late antiquity, smells "reveal[ed] identity." Smell was a tool of discernment, which helped Christians dissect a person's moral condition, determine whether God was present or absent, and perceive the presence of demons. Holy people, for example, gave off a winsome fragrance even in situations where they should have smelled wretched. Consider St. Irene, the abbess of Chrysobalanton. One day, while she was praying, her clothing caught fire. A fellow sister beat out the flames. Then, as the sisters pulled the still hot cloth from Irene's burned flesh, "a strange fragrance … incomparably more fragrant than any perfume" wafted out of Irene's wounds, wounds that ought to have smelled vile.

If sweet smells pointed to the divine, foul odors were constant reminders of sinfulness and moral depravity. Any smell associated with bodily decay was seen as a cue to death and the Fall. Stench was therefore a reminder of the ways in which the world was not yet redeemed. Still, people recognized that sometimes good practices yielded up bad smells—even the most devout monastics had bad breath when they fasted. This led writers into the land of metaphor, where the bad breath of fasting was reckoned as the sweet smell of asceticism. Saints were often beset by smelly bodily sores. Syncletia suffered from lung cancer and gangrene of the jaw at the end of her life, and the accompanying stench was overpowering: as one hagiography put it, "putrefaction and the heaviest stench governed her whole body so that the ones that served her suffered more than she did." The transformation of that stench to the lovely scent of flowers was the final proof of a saint's saintliness: the corpse of a saint did not decay or stink, but smelled of roses.

But smell did not just help Christians know, and know about, one another. It also helped Christians know God. Christian writers argued that, although God is separated from his Creation by a giant gulf, nevertheless the universe—and people's sensory apprehensions thereof—could reveal something about the Creator. Smells seemed particularly well poised to reveal something about God to people. Smells, after all, were a bit like God—you knew they were there, you sensed them, but you couldn't see or touch them. When you encountered an odor, you knew that odor had a source, even if the source was far away. Scents, then, pointed toward a God people could not see. The relationship between a scent and its source even became, in the hands of some writers, a helpful metaphor for the relationship of the Father and the Son. There was something deeply incarnational about this epistemology. Because God's salvation of the world had been worked out through the material and the physical, through the very body of Jesus Christ, "an enriched Christian piety" engaged the senses through which people learned about the material world, and through that world, God. The Tosteruds, perhaps unwittingly, are drawing on a very old insight when they suggest that their scented candles can help us "Sense Him in a new way."

Today we take for granted the usefulness of our senses in apprehending reality. Yet it's worth remembering that, even as Christians articulated a sensory epistemology, ascetics worried that sensory experience was decadent and distracting. Many ascetical writers warned against abuses of sensory knowledge, cautioning that sensory experience was trustworthy only when the experience occurred within liturgically or ecclesially circumscribed parameters: the scent of the Eucharist told the believer something about God; a harlot's perfume did not. (On this reading, my own dependence on lavender sheet spray may show itself to be a bourgeois indulgence.) People had to be taught to distinguish between spiritually and morally edifying scents and dangerous, wanton scents.

Some of Harvey's most revelatory insights come when she connects Christian discourses about olfactory piety with politics. It's no coincidence, she argues, that both a lavishly olfactory piety and an ascetical discourse filled with warnings about sensory knowing emerged in the Constantinian era. The impulse to ground an epistemology in smell, and the impulse to caution against sensory excess, were both, in part, responses to Christianity's new political position. Christians' increasing comfort with extravagantly sensory liturgical practices reflected not simply an innocent embrace of God's good creation but also a theological and ideological commitment to "a public and imperial order that saw the Empire as God's earthly kingdom." Likewise, the ascetic's cautionary note destabilized the cozy relationship between church and empire: asceticism warned Christians against getting too comfortable in this world of political power and social prestige. Harvey's astute reading of the intertwining of politics and piety at the interstices of empire is not without resonance for American Christians today.

Scenting Salvation is just one of several studies published in recent years to tease out the theological implications of our understanding of the senses—it keeps good company with Leigh Schmidt's Hearing Things and Stephen Webb's The Divine Voice, to name just two. Certainly it is time that smell, too, got its due. If the early church was willing to accord the sense of smell real importance, early modern and modern scientists dismissed smell as a "lower" sense, clearly inferior to sight, touch, and hearing. Indeed, this hierarchy—with sight firmly ensconced at the top—persists unexamined in many quarters. Thanks to scholars such as Harvey, Schmidt, and Webb, we're beginning to see—and hear, and touch, and smell—what we've been missing.

Lauren Winner will be assistant professor of Christian Spirituality at Duke Divinity School starting this fall.