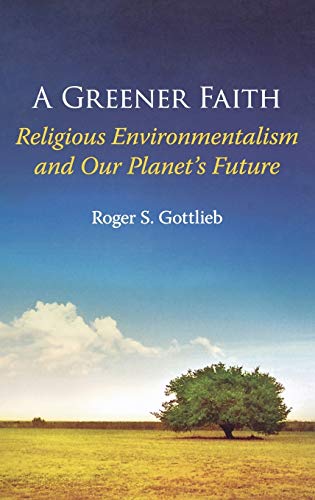 Early in my college career, the distinguished literary critic Wayne Booth paid a visit to a class in which I had managed to wangle a seat. The text of the week was Booth's Modern Dogma and the Rhetoric of Assent, an attempt to rescue reasoned discourse from the clutches of corrosive modern skepticism. Asked a question about a point on one particular page, Booth borrowed the teaching assistant's copy to check the exact wording. He looked up in surprise, a slight smile on his face, and said, "I see that the owner of this book has written in the margin, 'Bullshit.' "

As the graduate student in question turned bright red and the rest of us laughed out loud, I noticed that Booth seemed strangely satisfied. Someone was paying attention, even if they didn't exactly respond with "the rhetoric of assent."

I can only hope that Roger Gottlieb is half as indulgent as the late Dr. Booth should he ever come across my copy of his book A Greener Faith: Religious Environmentalism and Our Planet's Future. While I believe the marginalia are free of scatology, they do betray a fair amount of frustration. There are few causes in which I would more hope a writer to succeed, and there are few books that strike me as more likely to injure the cause, at least among one pivotal constituency: the evangelical Christians who, if books like Gottlieb's can be kept from doing too much damage, may yet become the decisive constituency for environmental stewardship in the 21st century.

Gottlieb, a professor of philosophy at Worcester Polytechnic Institute and frequent contributor to Tikkun magazine, is the very model of a postmodern progressive thinker. He leans "to the left side of just about any spectrum one could think of" but professes eagerness to engage those well to his right. He is frequently self-deprecating, generous to his likely opponents, and, it would seem, kindly disposed to folk of any flock who might join the environmental cause.

The phenomenon that Gottlieb documents—the flourishing ...