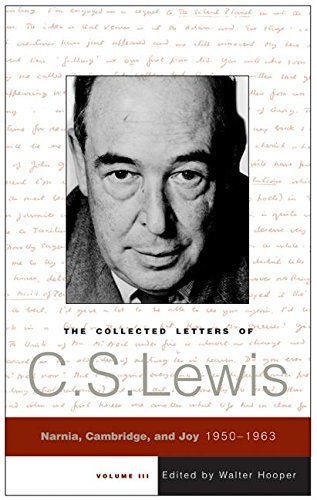 They Didn't Have Email

When I reviewed the first two volumes of Lewis' collected letters for Books & Culture three years ago, I finished with the word, "Encore!" My wish is now granted. Walter Hooper has returned to the stage with this third and final volume of Lewisian correspondence, covering 1950-1963, and his magnum opus is complete.

Editing a lifetime's letters is no easy undertaking: it is almost a lifetime's work in itself. First, the collecting of the letters is a Herculean labor. In the 44 years since Hooper served briefly as Lewis' secretary, he has steadily accumulated from all corners of the globe the material which makes up these volumes, namely 3,228 separate items of correspondence. Completists will be relieved to know that those letters which did not find their way into the earlier volumes, either for reasons of space or because they had not come to Hooper's attention, have now been included in a supplement to this third book. It is particularly pleasing to see the "Great War" letters to Owen Barfield in print for the first time, and more pleasing still that their dense philosophizing should be leavened by the inclusion of the many amusing illustrations which Lewis provided to clarify his arguments. The supplement even carries a few letters written during the period covered by this third volume; they came to light only after the main body of the book had been typeset. Hooper notes in his preface that "the occasional letter will be popping up for the next 100 years," a useful reminder that this aspect of the editorial task is akin to catching autumnal leaves in a wood, a game which requires first dizzying energy, then inexhaustible patience. No one could play that game perfectly, but Hooper has come darn close.

After the collecting comes the deciphering. Having studied for my own doctoral research many of the originals of Lewis' letters in the Bodleian Library at Oxford, I know that his hand, especially in later years when he began to suffer from rheumatism, was not always easily ...