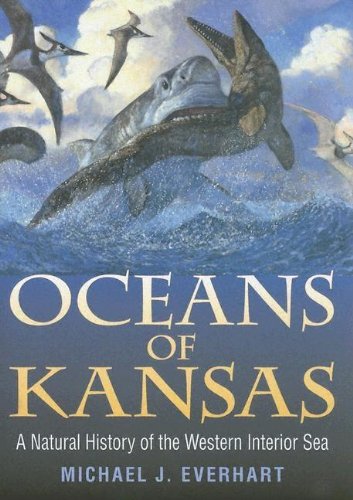 Oceans of Kansas: A Natural History of the Western Interior Sea (Life of the Past)
Michael J. Everhart
Indiana University Press, 2005
344 pp., 49.95

Editor's note: Science in Focus is on vacation in August, resuming our regular schedule in September. Meanwhile, we're going to the archives for science-related pieces from the pages of Books & Culture. This week we're featuring a piece by Robert Reber from the September/October 2006 issue.

Last winter, while traveling by train just south of the Arkansas River in Kansas, I was fortunate to observe one of the most scenic areas in the state. White-tailed deer and wild turkeys were numerous in the vegetated areas bordering the river. Except for the exclusion of the American bison, this area looked a lot like it did when the first settlers entered the state. Most students of natural history are familiar with the terrestrial plant and animal communities that were present on the Great Plains when this region was settled. Prairie grasses and herds of bison stretched as far as the eye could see. By the 1870s, the hide hunters and the cowboys had arrived, and the flora and fauna of the Great Plains were altered forever. The human history of this period is well-known. Most people know that Kansas was an "ocean of grass" before the introduction of modern agriculture in the state. What many people do not realize is that Kansas was covered by a shallow ocean for many millions of years. In his book, Oceans of Kansas, Michael Everhart introduces his readers to the creatures that flourished in this realm.

Everhart devotes much of his book to a description of the history of the organisms that were preserved in the Smoky Hill Chalk geologic deposit, created when the sea was at its deepest and a chalky mud was deposited on the sea floor over a five-million-year time span between 87 and 82 million years ago. Later, the chalk was buried under several hundred feet of shale when the sea receded at the end of the Cretaceous. The uplift of the Rocky Mountains and the Great Plains to the east exposed these chalk and shale layers to erosion, and today the Smoky Hill Chalk is exposed in the northwestern part of the state. Everhart describes the faunal component fossilized in this chalk in the context of the changing environmental conditions of the Western Interior Sea.

To give readers a sense of how we arrived at our present knowledge of the Western Interior Sea—and to convey the all-too-human side of science—Everhart recounts the history of paleontological discovery in the region. The first fossil from this ancient sea was found by the Lewis and Clark Expedition in 1804 along the Missouri River in what would later become northwest Iowa. The explorers misidentified the fossil as a large prehistoric fish; it was actually that of a mosasaur, a large aquatic reptile. Everhart describes the contributions of Benjamin F. Mudge of the Kansas Geological Survey, who began the first scientific collection of fossils from the Western Interior Sea. He also details the early paleontological finds in Kansas that occurred along the construction route of the Kansas Pacific Railroad. Many military posts were located along this railroad, and the military doctors stationed at these posts were the most educated men in the region and some of the region's first paleontologists. They sent many of the fossils back East for identification by paleontologists such as Joseph Leidy, Othniel Charles Marsh, and Edward Drinker Cope. Discoveries made in the Smoky Hill Chalk led to fierce rivalries between paleontologists, who were vying to name the new species found in this deposit. The rivalry between Marsh and Cope began with the unearthing of these Kansas fossils, a precursor to the "Bone Wars" that flared up when fossilized dinosaur bones were discovered in Colorado and Wyoming. Marsh and Cope would remain bitter rivals throughout their entire lives.

Everhart does a masterful job in organizing the book. After a detailed history of the discovery of the Western Sea, he devotes the following chapters to the principal faunal groups found in the sea: invertebrates, sharks, turtles, elasmosaurs, pliosaurs, polycotylids, mosasaurs, pteranodons, early birds, and dinosaurs. Most of these organisms were excavated from the Smoky Hills Chalk. In each of the chapters, he begins by describing a "Day in the Life" of these organisms, and in each case he takes some artistic license in describing how they interacted with other organisms and their environment. These reconstructions are based upon the physical clues that are preserved in the fossil record. For example, at the beginning of the chapter on sharks Everhart describes in vivid detail how a ginsu shark, Cretoxyrhina mantelli, might have attacked and devoured a large mosasaur. This predator-prey scenario is based upon evidence in the form of shark teeth imbedded in the fossil remains of many mosasaurs, and examples of partially digested, severed vertebrae.

Jeffrey, thanks for this picture (I'm seeing those shark's teeth in my mind's eye). I love the title (and the cover) of the book under review.