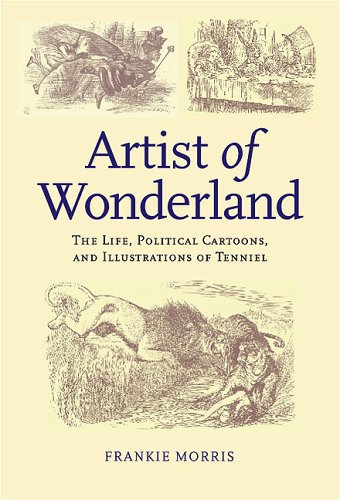 The life and work of John Tenniel.

In her introduction to Artist of Wonderland: The Life, Political Cartoons, and Illustrations of Tenniel, Frankie Morris recounts that it was in "the land of counterpane" that she was introduced to the drawings of Sir John Tenniel (1820–1914). During a long childhood illness she had been given the Alice books as a gift from her school, and she recalls that "The strangeness of those books was like a private place to which I returned again and again to imbibe its odd flavor." Strangeness nicely captures the elusive essence of Wonderland. If Tenniel had been set to illustrate Dickens or Surtees or Thackeray or Trollope, he might have produced illustrations of a high order—his Punch cartoons prove how adaptable, professional, ready to please he was—but he would never have got hold of the peculiar strangeness that we see displayed in the Alice books, a strangeness that allowed him to forsake the expectations of his Punch readers and go instead down the rabbit-hole of his imagination.

Virginia Woolf said that since childhood somehow survived intact in Lewis Carroll, "he could do what no one else has ever been able to do—he could return to that world; he could recreate it, so that we become children again." But surely Carroll could never have recreated that world entire without Tenniel's wonderful drawings. To read Woolf's description of that world is to be reminded of a collaboration unparalleled in literature:

"Down, down, down, would the fall never come to an end?" Down, down, down we fall into that terrifying, wildly inconsequent, yet perfectly logical world where time races, stands still; where space stretches, then contracts. It is the world of sleep; it is also the world of dreams. Without any conscious effort dreams come; the white rabbit, the walrus, and the carpenter, one after another, turning and changing one into the other…. It is for this reason that the two Alice books are not books for children; they are the only books in which we become ...