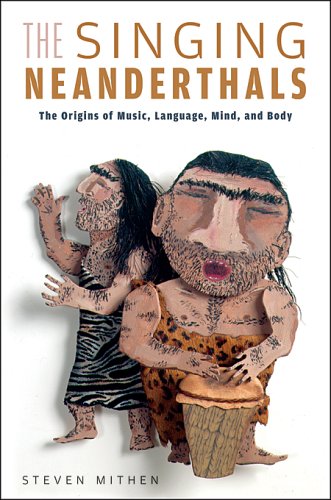 I must admit that the basic premise of Steven Mithen's The Singing Neanderthals—that human language was an outgrowth of Homo sapiens' natural propensity for singing and music-making—makes me a little itchy. When Mithen gives us a chapter subhead like "Nina Simone singing 'Feeling Good': Homo sapiens at Blombos Cave, wearing shell beads, painting their bodies and feeling good," I know he's just making the text reader-friendly. But this is the kind of idea that attracts many readers less because of its scientific coherence than because it's such a cool notion.

Traditional analysis of our mental capacity for language depicts it in a coldly abstract manner couched in a user-unfriendly jargon, focused on obscure wrinkles in how we talk that strike the layman as dry and trivial, such as the fact that you can say Who do you think will say what? but not What who do you think will say? How much more appealing the idea that language actually piggybacked on something as warm, visceral, and social as music. And an evolutionary tale featuring jamming Neanderthals will find a ready audience even among many academics, happy to be exempted from dealing with the navel-gazing abstruseness of modern theoretical linguistics.

After all, the aforementioned savants have yet to present a scenario for how language could have emerged among a species that began without it. It's a tough nut to crack: listen to apes grunting, and then explain how to get from that to Oscar Wilde's "I can resist everything but temptation"—or even "Pass the salt." In these circumstances, we need as much fresh thinking as possible, and Mithen's is certainly that.

The usual idea is the intuitive one: that language began with words—Leopard! Ouch! and so on—and that gradually humans began putting the words together as sentences expressing more complex thoughts; i.e., grammar was born. But Mithen argues, on the contrary, that humans first communicated via little strings of syllables expressed with ...