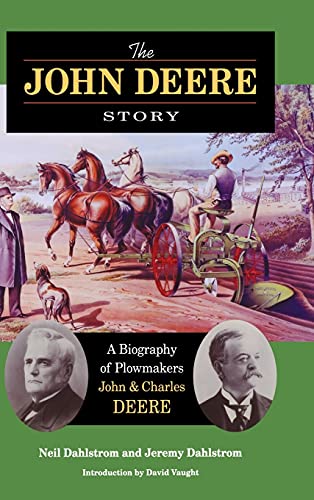 Last November The New York Times reported on a massive mountain of corn 60 feet high and as wide as a football field. It's one of 11 similar piles in Iowa growing as a result of excess corn. The Times blamed federal farm subsidies for the eagerness of farmers to flood the market with their produce. But it's hard to tell a farmer not to do what he does best—maximize the output of his land. Unfortunately, those mounds of corn in Iowa reveal the irony of the agriculture economy. The better farmers do their job, the more they produce, the cheaper their goods, and the more seed they sow.

American farmers have been dealing with this irony since at least the 1860s. "The latter third of the nineteenth century might well be called the age of paradox in American agricultural history," writes David Vaught in his introduction to Neil and Jeremy Dahlstrom's The John Deere Story: A Biography of Plowmakers John & Charles Deere. "Farm output, after doubling between 1840 and 1860, more than tripled from 1860 to 1900, yet for farmers themselves this was a time of deep and bitter discontent."

As Midwestern farmers tamed the prairie, blacksmith John Deere was there to provide the singing blade that would cut through tough soil. And as output increased and prices dropped, those farmers who grew to rely on manufactured farm implements turned John's son Charles into one of the tycoons of the Gilded Age. The Deere company's story is the story of the transformation of American farming from yeoman to agribusiness, and the transformation of an invention into a feel-good American icon.

John Deere was born in Rutland, Vermont, on February 7, 1804. His father disappeared in 1808 after leaving to collect an inheritance in England; he was never to be heard from again. With five brothers and sisters, John and his family worked hard to make ends meet. In Rutland, he learned the Puritan values of hard work and honesty, which he would carry with him to Illinois. At age 17, John apprenticed with a local ...