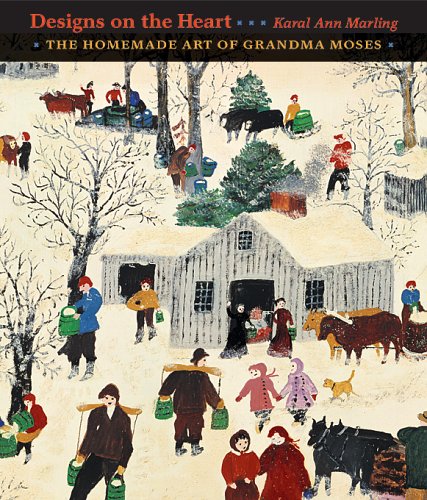 The art of Grandma Moses.

Asking Karal Ann Marling to write a catalogue for a museum exhibition—which is just what Paul D'Ambrosio of Cooperstown, New York's Fenimore Museum, did—is a little like asking Jamie Oliver to fix a snack. That you will get anything less than a feast is unimaginable.

Anyone else commissioned to provide some commentary on Grandma Moses would have rehearsed the basics. A widow in upstate New York, Mrs. Moses began painting in her seventies. She specialized in scenes of rural America—snowy farmland dotted with red houses and picket fences—and pictures inspired by nursery rhymes like "Mary had a little lamb." Moses gave her early paintings away as Christmas presents—to relatives, neighbors, and the postman—and hung a few up for sale, alongside jam, embroidery, and other fancy work made by local women, in the window of the W. D. Thomas Drug Store in Hoosick Falls, New York. Louis Caldor, an art collector visiting from Gotham, took a fancy to the pictures at once. He bought them all, and then went to the Moses farm to see if the artist had more. Caldor became a Moses evangelist, eventually getting three of her pictures included in a 1939 show on "Unknown American Painters" at the Museum of Modern Art. Caldor also introduced Grandma Moses' paintings to Otto Kallir, who owned a gallery on West 57th Street. Kallir saw something special in Grandma Moses' untutored art, and he agreed to host an exhibition, called "What a Farm Wife Painted." Before long, the elderly widow was a star.

Marling—a stunningly astute observer of American visual culture, who, among other things, managed in her book As Seen on TV to make a serious scholarly argument about paint-by-numbers sets—goes far beyond basic biography. She provides all that information, of course—indeed, she even complicates the received wisdom that Grandma Moses didn't start painting until her eighth decade. From her youth, Grandma Moses, then known as Sissy Robinson, loved making ...