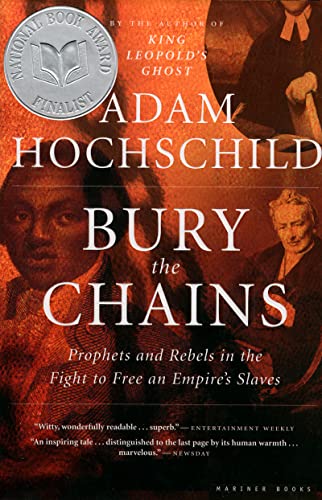 Bury the Chains: Prophets and Rebels in the Fight to Free an Empire's Slaves
Adam Hochschild
Mariner Books, 2006
496 pp., 19.99

The late 18th- and early 19th-century campaign to end slavery in the British Empire, Adam Hochschild argues, "forged virtually every important tool used by citizens' movements in democratic countries today." He concludes: these abolitionists knew that "the way to stir men and women to action is not by biblical argument, but through the vivid, unforgettable description of acts of great injustice done to their fellow human beings."

Half right. Bury the Chains is indeed a riveting history of the British anti-slavery movement. Beginning in 1787 with a London meeting of twelve men resolved to challenge English participation in the slave trade, the movement swept across much of England. In Manchester ten thousand residents signed a petition in opposition to the trade only a few months after that initial meeting; the next year's Parliament received 103 petitions representing up to 100,000 people. The early days of the French revolution furthered the cause. (Lafayette, hero of the American Revolutionary war and then mayor of Paris, had already freed his own slaves in French Guiana.) At the same time, Oladuah Equiano, the first former slave to enter the debate, toured England promoting his bestselling autobiography, a searing depiction of West Indian slavery. By 1791, hundreds of thousands of anti-slavery women in Britain had coordinated one of the world's first boycotts, of sugar produced by West Indian slaves.

Horror at the turn taken by the French revolution in the 1790s and looming Anglo-French military conflict reversed this momentum. "War fever," Hochschild dubiously claims, "is always the enemy of social reform." Regardless, West Indian planters hired lobbyists to press a defense of slavery in the press and the halls of Parliament, and mobilized as pro-slavery spokesmen leaders in port cities, such as Liverpool, dependent on the trade. Massive slave revolts in both the French (Haiti) and British (Jamaica) West Indies in the 1790s, and the bloody wars that ensued, hardened Parliamentary resistance. (More British soldiers lost their lives during the West Indian campaign than during the American Revolution.) Only in 1807 did anti-slavery activists manage to persuade Parliament to ban British participation in the slave trade. And only in 1833 did Parliament vote in favor of slave emancipation, with the proviso that twenty million pounds (40 percent of the national budget) be sent to slaveholders as compensation.

David Brion Davis, Seymour Drescher, and other historians of this epoch plowed much of the initial scholarly ground, as Hochschild generously acknowledges, but even veterans familiar with this literature will benefit from Hochschild's integration of the Haitian and Jamaican story into a history usually dominated by the activities of European and American reformers. Hochschild teaches writing at the Graduate School of Journalism at the University of California, Berkeley. If his students absorb the deft prose on display in Bury My Chains, we can be optimistic about the literary future of the American press.

The interpretive frame is less satisfactory. Michael Ignatieff recently described the anti-slavery movement as the first global human rights campaign, and Hochschild rushes to bolster this claim. He wishes his readers to absorb the "contagious" passion and optimism of these reformers, since even now, "in so many parts of the world, equal rights for all men and women seem far distant." "From their successful crusade," he solemnly instructs us, "we still have much to learn."

Unfortunately Hochschild's first lesson is to make an anachronistic distinction between religious (bad) and secular (good) reform. The anti-slavery moment, he opines, marks the moment when reformers moved from reliance on "sacred texts" to "human empathy." High praise goes to Thomas Clarkson for writing a report "more like a report by a modern human rights organization" instead of a "moralizing tract." Clarkson, himself, in Hochshild's view, becomes the single most prominent figure in the British anti-slavery movement, a plausible but still debatable claim, especially when his appeal to Hochschild seems driven in part by Clarkson's alleged doubts about "organized religion." Clarkson's own conversion to the anti-slavery cause seemed to many contemporaries a kind of Saul-on-the-road-to-Damascus moment. "For us," Hochschild writes, and the first-person plural is telling, it is "a landmark on the long, tortuous path to the modern conception of universal human rights."

Other activists fall to the same cleaver. Zachary Macaulay, a leading evangelical anti-slavery activist, is dismissed as "priggish," "dour," and "fixated on blasphemy and sin." Only "paradoxically" does he write a damning investigative report on the conditions endured by slaves during transport to the West Indies. With regret, Hochschild notes that William Wilberforce, the leading anti-slavery figure in conventional narratives and a devout evangelical, named as his greatest achievement in life, not ending slavery in the British empire, but sponsoring the first Christian missionaries to India.

None of this is to deny that the recalcitrance of most churches on the slavery question caused widespread disillusionment. Neither is it to deny, as Hochschild points out, that the rhetoric of antislavery led to debates about the "slavery" of women to men, or, as he doesn't note, the "slavery" of Catholics to the pope. But the debate over the legitimacy of slavery was an intensely religious one on all sides. Some religious people opposed slavery, even as other religious people defended it. But they all spoke and wrote in a theological vocabulary alien to most contemporary discussions of human rights.

Presuppositions about religion also shape Hochschild's venture into the quicksand of causation. Why, after all, did the anti-slavery movement begin in England, and not, say, Holland? Why did it start at the end of the 18th century? Why did it progress so quickly, so that virtually every country in the world had (formally) abolished slavery by the emancipation of Brazil's slaves in 1888?

No simple answer for this complex question is meaningful. And Hochschild deserves credit for facing the question head-on. But his tentative stab, that mass impressments into the British Navy jumpstarted concern about personal liberty, is unduly narrow. (He notes, nervously, that impressment has been "curiously ignored by scholars.") Here, in a book that demonstrates solid command of the secondary literature, Hochschild omits the most sophisticated discussion of this question, David Brion Davis and Thomas Haskell's debate over the causes of antislavery in the American Historical Review twenty years ago. Neither historian convinced all readers. But both recognized that a shift in moral perceptions as momentous as the realization that slavery was wrong necessarily involved changes in religious understandings of empathy and suffering, not simply a move from religious understandings to secular ones. Put another way, we must banish the image Hochschild perhaps inadvertently forwards: of anti-slavery activists as proto-Amnesty International members straining to escape a culture blighted by religious obscurantism. Even Clarkson, after all, not having preached in his life, felt no compunction about offering an on-the-spot sermon based on a text from Exodus when asked to explain his opposition to slavery: "thou shalt not oppress a stranger; for ye know the heart of a stranger, seeing ye were strangers in the land of Egypt."

In all this Hochschild reflects our own time. Arguably the most important religiously based "reform" effort of the last generation has been the anti-abortion campaign, a movement not high on the agenda of most professional human rights activists. (It's not coincidental that "reproductive rights" has become a pro-choice slogan.) If the achievement of Bury My Chains is to offer a gripping account of the campaign to eliminate slavery in the British empire, its limitation is to read current cultural divisions into a more complex, even alien past.

John T. McGreevy teaches history at the University of Notre Dame. He is the author of Catholicism and American Freedom: A History (Norton).