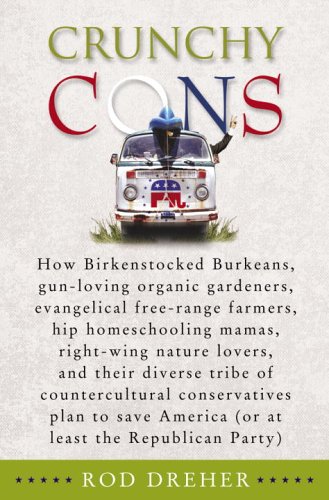 A strange thing happened to Rod Dreher in the summer of 2002. From the bowels of the modern conservative movement itself, he, a young writer for the National Review, published an online column that rang out as a call-to-arms. In "Birkenstocked Burkeans: Confessions of a Granola Conservative," Dreher disclosed that he and his wife "have more in common with left-wing counterculturalists than with many garden-variety conservatives." Among the tell-tale signs were a taste for organic food, a deep suspicion of big business, and a conviction that environmental conservation is a great good. "Somebody's got to pioneer these things" on the Right, he declared. "Dare to dream, you Birkenstocked Burkeans, and pass the hippie carrots."

They did more than dream—they deluged him with email. The article sped through cyberspace and into the homes of thousands of like-minded folk, leading Dreher, less than four years later, to enlarge his modest column into a pop manifesto, Crunchy Cons, with a subtitle that parodies the bombast you can find on thousands of book-jackets these days.

The subtitle is more than cute—it's instructive. Dreher, now an editor at the Dallas Morning News, seeks to use all of his considerable charm and wit to provide ballast for a movement he's discovered to be well underway. As the subtitle's mock-grandiosity hints, though, it's not the usual political movement for which and to which he's trying to speak. Rather than outlining a policy driven program, he's sketching "a sensibility, an attitude, a fundamental stance toward reality," one that might lead more and more toward a "secession of sorts from the mainstream" in order to "conserve those things that give our lives real weight and meaning."

At the very center of this brazenly countercultural vision is an effort to "see life sacramentally," to understand "the physical aspects of our lives"—food, place, woods, lakes—"as being inseparable from spiritual reality" and, indeed, the mediator of it. ...