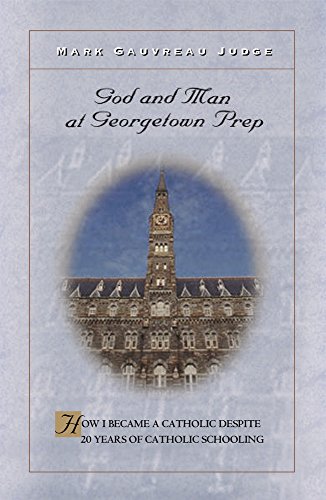 God and Man at Georgetown Prep: How I Became a Catholic Despite 20 Years of Catholic Schooling
Mark Gauvreau Judge
Crossroad, 2005
192 pp., 18.95

Long before the current clergy sex abuse scandal, a significant portion of American Catholics had already come to identify themselves as survivors. Viewed rhetorically, the response to this all-too-real current crisis follows the script of an earlier abuse scandal of somewhat more questionable veracity: Catholic education. American Catholics who came of age in the 1960s like to identify themselves, for better or for worse, as the people who were beaten by nuns. As comedy or tragedy, this story has been American Catholics' chief contribution to late 20th-century American popular culture, as witnessed by the broad appeal of stage productions such as Do Patent Leather Shoes Really Reflect Up?, St. Mary Ignatius Explains It All for You, Nunsense, and Late Night Catechism.

In God and Man at Georgetown Prep, Mark Gauvreau Judge writes as a survivor not of abuse, but of neglect. Coming of age in the 1970s, Judge missed out on the gory/glory days of tough-guy priests and ruler-wielding nuns. Drawing on the theological spirit, if not the anglophile cultural posturing, of the conservative Catholic William F. Buckley's classic God and Man at Yale, Judge exposes and indicts the functional atheism that has shaped Catholic educational institutions in the decades following the Second Vatican Council (1962-65). Judge's book is an unabashed plea for Catholics to recover the world they have lost and reclaim the birthright they have sold for the material comforts and cultural respectability of mainstream, middle-class American life.

As an approximate generational contemporary of Judge, I can attest that he knows the world of which he writes. Growing up in the Washington-Baltimore area, the son of a successful journalist who wrote for National Geographic magazine, Judge found himself in an Élite Catholic educational milieu that fully embraced the liberal interpretation of Vatican II. Judge's account of his education gives me new appreciation for provincialism: reform came a bit later ...