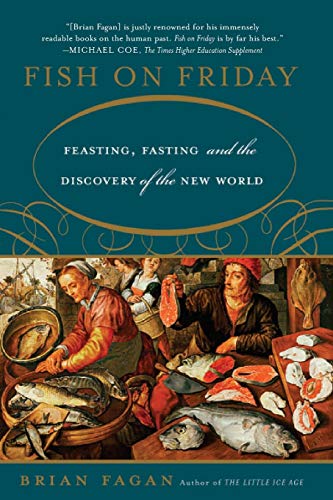 In the 19th century and much of the 20th, fish usually was cheaper than beef. Today, ocean-caught fish can be many times more expensive, largely because many of our supplies are nearing exhaustion. Brian Fagan's Fish on Friday: Feasting, Fasting and the Discovery of the New World ties together history, economics, gastronomy, theology, archaeology, and climate science to tell a multidisciplinary tale of how fish became so easy to catch and to eat.

Most of the book covers late medieval times, but it reaches as far as the late 17th century. Time and again we learn that fisheries had a great economic importance. "A half century after it became widely known," Fagan writes, "the Newfoundland fishery was an enormous European industry, equal to the entire Spanish trade with the Americas," a surprising comparison that neatly brings home the revisionist ambitions of Fagan's enterprise.

In the same vein, to suggest the importance of fish in everyday medieval life, Fagan contrasts the castle and the monastery, the two major venues for eating in groups in medieval Europe. One practiced austerity, the other excess, but both needed fish. By the end of the 14th century, 700 to 800 people were employed simply in feeding the French court. The coronation of Pope Clement VI at Avignon required 7,428 chickens and a small army to cook them. It is no wonder that fish farming became popular, carp farming in particular. Fish farming also was a natural spin-off from water mills, a new power technology that drove much of medieval economic growth. By backing up pools of calm water, mills made it easier to farm fish.

Fish farming started in the 11th century and spread across Europe rapidly. By the mid-14th century, carp farming in particular was big business; by the 15th century there were 25,000 carp ponds in Bohemia alone. The downfall of carp farming came when herring and cod became easier to catch and preserve; most Europeans preferred the taste of fish from the sea.