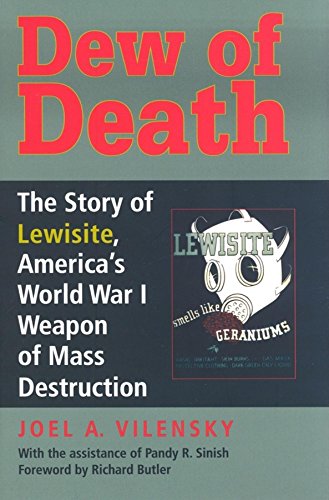 An American weapon that has never killed an enemy but still claims innocent victims.

Editor's Note: This article about the strange and admonitory history of the chemical weapon lewisite was first published in the January/February 2006 issue of Books & Culture. Less than a week ago, I read a news article about cleanup efforts at Redstone Arsenal in Alabama, where one of the plants produced mustard gas and lewisite. Other sites at the facility contain residue from chemical weapons produced during World War II. The cleanup is projected to last for several decades.

Does the word "chemical" make you uncomfortable? Do you think of "natural" and "chemical" as opposites? When the tv pitchman promises "Cleans faster with no harsh chemicals" do you give him just a little more attention? If so, you are not alone. Most modern people are afraid of chemicals. Which is too bad. Because elephants, bacteria, humans, mice, trees, and tigers are all chemical factories so efficient that chemical makers wish they could approach even a small fraction of the efficiency of any living organism.

Chemicals and chemistry were not always the subject of fear and dread. In the 19th century, chemicals became the building blocks for effective drugs and for rapid advances in public health. Clean water, anesthesia, and painkillers—things we take for granted today—were and are the result of advances in chemistry.

It's not hard to trace the beginning of the downhill slide in the image of chemistry. On April 22, 1915, Captain Fritz Haber ordered German troops to open the valves on 6,000 pre-positioned cylinders of chlorine. Within minutes, Algerian and French troops in trenches near the Belgian village of Ypres saw a yellowish-green cloud rolling toward them. As the heavier-than-air gas filled their revetments, the troops who could run did; the rest writhed in agony as the gas burned their throats and eyes and finally drowned them in the fluid of their own lungs.

It is doubly sad that Haber selected chlorine for the debut of gas warfare, because chlorine has made billions of lives better across the globe in the last hundred years. The vast majority of drugs use chlorine in some step of their synthesis, and chlorine is still the most widely used and effective disinfectant for public water systems. The beginning of the 20th century was the beginning of the end of cholera and other water-borne plagues because chlorine kills germs so well. Then, Captain Haber showed that an element that could kill germs could also kill and maim people.

Had the German army pressed its attack on that horrible day, the war might have ended before the United States joined the Allied armies in 1917. But the Germans checked their advance. The French and British counterattacked, and the war dragged on for three more years: years with millions of combat casualties, including hundreds of thousands injured and dead from chemical attack.

If chemistry's reputation was damaged by World War I, the field nevertheless retained much of its luster through the great advances of the mid-20th century. Then Love Canal, Silent Spring, Agent Orange, and Bhopal tarnished the public image of chemistry to the point that, beginning in the 1990s, some chemical companies and even some chemical trade organizations have changed their name to remove the word "chemical." Sometimes the switch is subtle, from chemical to chemistry (focus groups show the public is less afraid of the latter); sometimes the new name is a vague, Latin-derived neologism that hints at science.

And then in 2005, the 90th anniversary of the first use of chemicals as a Weapon of Mass Destruction (WMD) and the 60th year since the first use of the most fearful WMD, the atomic bomb, Joel A. Vilensky published Dew of Death: The Story of Lewisite, America's World War I Weapon of Mass Destruction—a weapon hailed as the deadliest in history, yet one that has never been used by America in combat and likely would not have been effective if it had been employed.

Vilensky's account begins with two American chemists who were born in the same year and were instrumental in the development of lewisite. They never worked together, they did research in very different areas of chemistry, and while they may have corresponded, they probably never spoke to each other.

The development of lewisite began in 1903, when one of these chemists, Father Julius Nieuwland, mixed acetylene and arsenic trichloride and nearly killed himself. Fifteen years later, our second man, Captain W. Lee Lewis, a chemist with no background in poison gas development, volunteered for the war service. He was given lab equipment and told to develop a chemical weapon deadly enough to end the war.