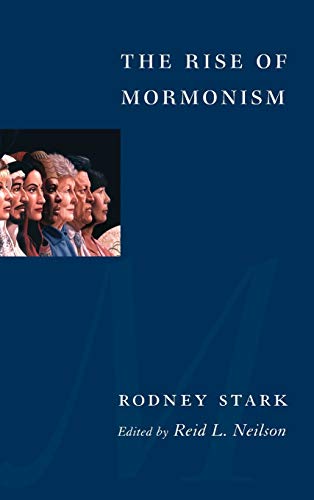 Is Mormonism the first new world religion since the birth of Islam?

In 1984, sociologist Rodney Stark startled the academic world with a claim that has kept religion-watchers scratching their heads ever since. "The Church of Jesus Christ of Latter-day Saints, the Mormons," he predicted, "will soon achieve a worldwide following comparable to that of Islam, Buddhism, Christianity, Hinduism, and the other dominant world faiths."1 Stark claimed that Mormonism had grown faster than any other new religion in American history. Between 1840 and 1980, it had averaged a growth rate of 44 percent per decade; in the four decades 1940 through 1980, growth zoomed to an astonishing 53 percent. If it maintained a 30 percent growth rate, Mormons would exceed 60 million by the year 2080; if 50 percent, then 265 million by 2080.2 "Today," he declared, "they stand on the threshold of becoming the first major faith to appear on earth since the Prophet Mohamed rode out of the desert."3

In 1996, twelve years later, Stark reported that his high estimate of projected growth was too low: by 1995, there were one million more Mormons than even a growth rate of 50 percent had predicted. Therefore he was still holding to his earlier projection of 265 million by 2080.4 In 2001 he was saying the same: "By late in the twenty-first century the Church of Jesus Christ of Latter-day Saints will be a major world religion."5

Rodney Stark is one of America's pre-eminent sociologists of religions. A onetime journalist who writes with a breezy and provocative style ("For much of its existence, the social scientific study of religion has been nothing of the sort," he deadpans in his new book on the Latter-day Saints), he has made a career out of debunking his discipline's cherished assumptions.6

Now University Professor of the Social Sciences at Baylor University, Stark is unrepentant about his prediction of world-historical success for Mormonism. In The Rise of Mormonism, he continues to assert that the growth of this new American religion is "one of the great events in the history ...