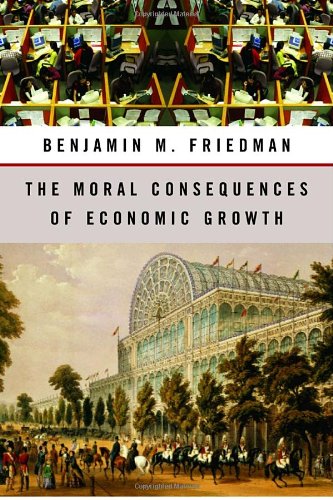 Why Growth Is Good

Being asked to review a book by an economist that is 500 pages long and has over 1,000 endnotes is an unusual event in today's publishing world. Academic economists mostly write articles; few write books; even fewer write books the scope of Benjamin F. Friedman's The Moral Consequences of Economic Growth. Friedman is Maier Professor of Political Economy at Harvard University, and he merits the old-fashioned title, "Professor of Political Economy." Like Adam Smith and Alfred Marshall before him, Friedman takes readers far beyond the neoclassical paradigm and econometrics of contemporary economics and instead weaves a remarkable tapestry of economics, history, and politics, with theology and psychology also sewn in. So the question is: what does the resulting fabric look like?

The first thread in Friedman's analysis is the conventional wisdom in economics. This idea goes back to Adam Smith: the wealth of a nation consists of its goods and services, not its gold. Today, an economics teacher might simply state what seems obvious (at least to economists): expanding a consumer's choice set necessarily makes the consumer better off (or at least no worse off, since the consumer can always choose the original choice set).

Today the conventional wisdom is often criticized. At one time, those opposed to what Adam Smith called the "obvious and simple system of natural liberty" faulted the market system for producing too little. That was the old-fashioned case against capitalism. ...