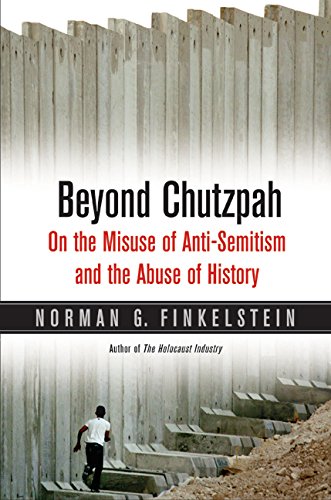 Beyond Chutzpah: On the Misuse of Anti-Semitism and the Abuse of History
Norman G. Finkelstein
University of California Press, 2005
343 pp., 42.95

"These Pigs on the Face of the Earth"

A dedicated, manic assassin of the reputation of the Jews and of Israel, Norman Finkelstein is much admired by college student audiences for his lively platform presence and his snarling, late-night comic style. The Finkelstein method (which brings the audiences to his lectures) is to hold up to ridicule individual pro-Israel polemicists by endless nitpicking about references that go wrong or about anomalies and contradictions between and among their many published statements in many different times and places. The entire lifetime record of the published author is picked over for anomalies, contradictions, and food for tu quoque. Finkelstein brings a virtual wheelbarrow of documented errors onto the platform and pours it out, to the delight of the audience, as proof that the general truths from which his adversary draws his scholarly or political commitments have, before your very eyes, been proved to be "myths," "frauds," and "hoaxes."

No serious person can deny the doggedness of Finkelstein's pursuit down the path from footnote to footnote. The effect can be quite chilling, especially when it comes home to the vulnerable celebrity-polemicists such as Alan Dershowitz and various spokesmen for the Anti-Defamation League or the Simon Wiesenthal Center. Dershowitz gets the full Finkelstein treatment in the present book; in fact, the bulk of it is a rehash of the record of Finkelstein's several assaults on Dershowitz's uneven polemics. The real scholars, producers of the unanswerable accounts which draw upon documents in all the relevant languages, don't get noticed—except (for example) in a footnote about the reigning master of Middle East History, Bernard Lewis, where in the tu quoque mode, a reference appears to a remotely relevant matter (Lewis' judgment on the historicity of the Armenian massacre). There are no references to any of my three published scholarly books on matters very germane to Finkelstein's apologetics. But then, I am being petty.