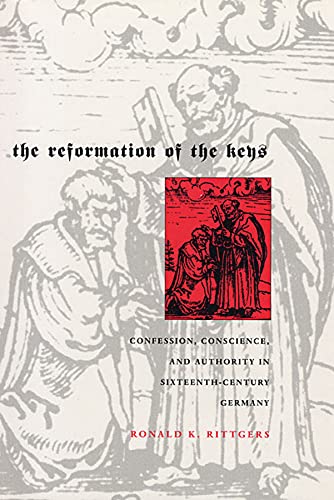 The debate over confession in 16th-century Germany.
November/December 2005

In the Presbyterian church of my youth, we were admonished each week to confess our sins silently to God. To an impressionable young mind, a minute or so of silence could provoke all sorts of uncomfortable speculations—whether I had committed the unforgivable sin, whether I had confessed all of my sins, why it was I could not focus my attention on God. To me, these were great, lonely pauses, despite the soft coughs and sniffling. Each week, however, the silence was always quickly followed by a warm reassurance of God's free grace and forgiveness. Though I may have been theologically naïve, I knew intuitively, even then, that this proclamation of grace was the main thing—that its validity did not depend on my secret worries.

Like many who grew up Protestant, my experience of confession has been of a general or purely private sort—either a liturgical reading or a silent prayer. Only Catholics, it seemed, were required to confess their sins to a priest. To the best of my memory, I do not recall having heard a Protestant sermon on the passage in Matthew—the traditional proof-text for Catholic confession—in which Jesus entrusts Peter with the "keys to the kingdom of heaven." I may have heard one, but the exotic powers invoked in the verse—"whatever you bind on earth will be bound in heaven, and whatever you loose on earth will be loosed in heaven"—were no doubt too subtle and obscure to remain long in my mind.

There was a time, however, when the issue of the "keys" in general—and private confession in particular—aroused great interest among Protestants. In The Reformation of the Keys: Confession, Conscience, and Authority in Sixteenth-Century Germany, Yale University historian Ronald Rittgers tells a fascinating story of how the first generation of Protestants in the German city of Nürnberg struggled to determine exactly what role private confession and absolution should have in their new church orders. Because English-language sources on the subject are scarce, it may come as a surprise to many readers that German Lutherans developed a distinctively evangelical form of private confession, which lasted into the 18th century. In The Reformation of the Keys, we can relive one 16th-century city's struggle to work out the practical and institutional implications of the new Protestant doctrine of grace, particularly as it related to confession and clerical authority.

"I will give you the keys of the kingdom of heaven." Jesus' words to Peter had momentous consequences for Western civilization. For centuries, the Church in the West would use them to support its exclusive claims to religious authority. It alone could bind and loose sins; it alone could dispense the divine grace necessary for salvation. On this foundation was built the powerful and omnipresent Church of the Middle Ages, able to hold sway over princes and emperors and to rouse all of Western Europe to crusade. The power of the "keys" also justified the medieval Church's interest in the most intimate details of everyday life, especially through the sacrament of confession—the "second plank" thrown to drowning Christians when they sinned after baptism.

During the Middle Ages, the Church remained more or less secure in its possession of these powers. Though ecclesiastical authority suffered severe setbacks during the 14th and 15th centuries, only in the 16th century did Protestant Reformers radically challenge the traditional interpretation of the "keys"—and with it the sacerdotal authority the medieval clergy had claimed for itself. If God's mercy was fully and freely available through faith, then the clergy's traditional right to parcel out grace was a human fiction, abused for the sake of money, power, and status. Emboldened by this new interpretation, communities throughout Europe began dismantling the innumerable institutions, penitential rites, and clerical prerogatives that had clustered around the Church's monopoly on forgiveness.

The German city of Nürnberg, the setting of Rittgers' book, was one of the first European locales to enact these revolutionary changes. In the early 16th century, Nürnberg was a self-governing community with a population of approximately 40,000—one of the largest and most powerful cities in the fragmented Holy Roman Empire.

As in many other German cities, the force of Reformation in Nürnberg had a great deal to do with its powers of negation. Though Luther's theology offered a new, positive vision of grace, it gained strength and popularity largely as a rejection—both of traditional clerical authority and the elaborate system of penances, pilgrimages, processions, and pious bequests through which medieval Christians had sought to appease God. In the new "evangelical" doctrine, grace was not in the possession of a clerical caste, to be dispensed incrementally during each sinner's lifetime. Rather, it was offered freely and fully to all sinners. This new vision radically simplified religious life. The effect seems to have been something akin to a flood sweeping over fields crisscrossed by an elaborate irrigation network. Abundant waters made the old, grooved channels irrelevant. At times, they threatened to destroy the fields altogether.

By the mid 1520s, just a few years after the publication of Luther's 95 Theses, the Nürnberg city council had dismantled much of the traditional religious system. The magistrates abolished penitential rites, shut down the city's main monasteries, and took control of poor relief and marriage (two jurisdictions that had previously belonged to the Church). The secretary to the city council, Lazarus Spengler, a layman, wrote a theological treatise, An Apology for Luther's Teaching (1519), in which he attacked medieval churchmen as "preachers of fables," who taught the laity that they could buy their way out of purgatory as at a "fair" or "merchant's market." Reformers aimed to convince Nürnbergers that they need not rely on the elaborate penitential rites they had learned as youths.

After depriving the clergy of their traditional monopoly on grace, however, the city was left to determine exactly what authority a new evangelical pastorate would possess. How much power would they have to drive sinners to repentance and bring them safely into grace? For Protestants, of course, it was primarily the preached Word that enacted and promoted the sinner's rebirth, by leading her to trust God's free promise of forgiveness. Even so, a great quarrel arose in Nürnberg about the role private confession should play in bringing about true faith and salvation.

Medieval theologians had vigorously debated exactly how the clergy administered grace, but almost no one questioned that priests alone could administer divine forgiveness. Before laypersons took communion each year during Holy Week, they were required to confess all their sins to a priest, receiving from him absolution as well as penances for repaying God and shortening one's time in purgatory. Rittgers stresses the mercantilistic aspects of the traditional system. For late medieval men and women, purgatory was a sort of "debtors' prison." Penance was a means of settling one's spiritual account with God. If we extend these metaphors further, we might liken the priest to a banker or cashier—the middleman without whom these transactions could not take place.

For the new Protestants of Nürnberg, there was no longer any need to pay God back for past sins. The gospel proclaimed a free and full remission of sins and their penalties; all that was required of the sinner was heartfelt trust in God's promises. By the 1520s and 1530s, however, some of Nürnberg's leading theologians began to wonder whether the city's residents were abusing their newfound spiritual freedom, taking it as an excuse for indifference and license. Many residents of the city had simply stopped going to confession. Some preachers argued that more direct and immediate clerical authority was necessary to guide sinners to a correct faith.

Luther himself was a strong advocate of private confession. For him, it was a source of invaluable consolation—reassurance that the gospel was truly pro me ("for me"). In some ways, Lutheran confession was meant to be an antidote to the penitential mentality of late medieval confession. Congregants need not confess all their sins, but only make a general statement of sinfulness; the pastor was to offer unconditional absolution. There was no need for further penance. Where the medieval sinner was to be kept suspended "between hope and fear," Lutheran confession was meant to instill absolute confidence in personal salvation.

During the late 1520s and early 1530s, Nürnberg magistrates and theologians developed and then promulgated a new church order reflecting these new ideas. Like Luther, civic leaders were reluctant to do away with private confession altogether. Fearing that congregants might partake of the Lord's Supper unworthily, the new church order required pastors to interview Christians privately before communion. This was no Catholic interrogation. Rather, the interview was intended primarily to gauge the individual's knowledge of the "evangelical" message, since faith for Protestants depended on the correct understanding and perception of the gospel. During the interview, the pastor proclaimed free absolution to the sinner, commending it as a defense against despair. The congregant could confess as many or as few specific sins as he saw fit.

Though the new Nürnberg church order became a model for other Lutheran communities, it did not end debates in the city about the power of the keys. The City Council had long striven for full control of the city's church life and now, thanks to the Reformation, had final say in all religious matters. Thus, they only reluctantly granted the clergy the power to bar unworthy individuals from communion. Moreover, the new church order seemed to provide an alternative to private confession. In response to popular demand, the City Council had authorized the inclusion of a general declaration of God's forgiveness in the Sunday liturgy.

General absolution in Nürnberg soon provoked fierce controversy, and the intricacies of this debate are discussed in great detail in Rittgers' book. Suffice it to say that the city long retained the practice of private absolution, though the confession of particular sins remained voluntary. For Rittgers, evangelical private confession—and indeed, the evangelical faith in general—was all about confidence. Contrary to what some historians have suggested, Protestant leaders in Nürnberg were not "puritanical." Indeed, they generally avoided using sin as a means of social control—of threatening or manipulating the population. Indeed, in Rittgers' view, the city council deliberately sought to protect lay consciences from such exploitation. The new confession was meant to take away fear of the afterlife, not increase it.

At times, The Reformation of the Keys may present a slightly too rosy picture of the new Protestant order. Even so, the book offers a valuable corrective. Ever since the Reformation, critics have been quick to point out the antinomian potential of Protestant doctrines of grace. Now, with Rittgers' magisterial study, we can follow one community as it sought to find the right balance between "freedom and discipline."

Matthew Lundin is a doctoral candidate in early modern history at Harvard University.