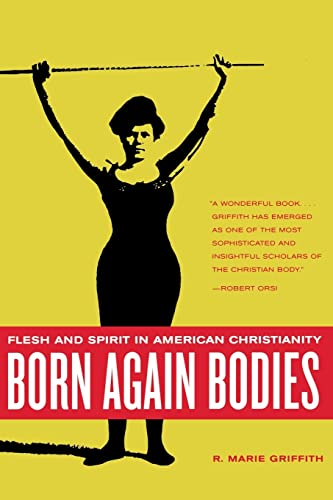 Several weeks ago my wife and I were driving home from Atlanta to Chapel Hill. A few miles out of the city, my eye caught a billboard featuring a lean young white woman pointing to her bare midriff. The caption read, "Look hon, no scars." The logo at the bottom directed viewers to the website of a local birth control clinic. Baffled (as usual) by the subtleties of modern advertising, I asked my wife what it meant. She patiently explained that it was an ad for tubal ligation. I drove on, thinking something deep like, "Oh."

After reading R. Marie Griffith's Born Again Bodies this past weekend, I saw the billboard in a new light. It is not often that a work of first-rate historical scholarship opens our eyes to the unspoken assumptions regnant in the world around us. But this one—written by a Princeton University religion professor—does. And no wonder. The book is exhaustively researched, elegantly crafted, methodologically self-conscious, and argued with moral passion. The volume marks a worthy successor to Griffith's influential Harvard dissertation on Women's Aglow, published in 1997 as God's Daughters: Evangelical Women and the Power of Submission.

The scope of Born Again Bodies is intimidating. Though focused on the American story, it begins deep in the Middle Ages and ends yesterday. In the process, Griffith ranges back and forth across the Atlantic, lingers among Puritans and their evangelical successors, delves into the intricacies of 19th-century New Thought partisans, ventures into the hermetic realm of body purging and fasting zealots, surveys a plethora of Christian-inspired sexual prescriptions and proscriptions, investigates the largely unknown sideroads of phrenology, physiognomy, and soma typing, and finally ends up in the vast subculture of the contemporary Christian diet industry.

Griffith's main argument can be stated in two sentences. Between the early 17th and the late 20th centuries, American body discipline practices evolved from a ritual of repentance to an exercise in self-gratification. Though a wide range of more or less secular forces propelled the process, Christians in general and white middle-class Protestants in particular pioneered that development. A closely related sub-argument is that Christians perennially have viewed the body as a window into the soul. Occasionally the process worked the other way around. A few body disciplinarians—usually New Thought advocates—felt that they could change the mind by manipulating the body. Either way, everyone, it seems, perceived an intimate connection between the spirit and the flesh. When it came to eternal matters, Christians saw through a glass darkly, but when it came to temporal matters, they saw clearly. The body told no lies.

Historians generally have interpreted the evolving meanings associated with rigorous dieting (and other kinds of physical denial) as a process of secularization. What started as mortification for sin, they say, turned into purposeful renunciation to compensate for the guilt of affluence and leisure.

Griffith disagrees. She argues instead that religion has been involved in those cultural protocols from beginning to end. The story is an evangelical one, centered on the good news of abstemious eating: go out, bring the (obese) sinners in, give them the (lo-cal) salvation message, hear their (before-and-after) testimonies, urge them to stay the (one-course) course, offer a helping (though never a second helping) hand to the weak-willed. If it is a New Thought story of gnostic discernment (there are bariatric secrets to be known), it is also a Wesleyan story of entire sanctification (permanent deliverance from the temptations of the palate), and a Reformed story of divine sovereignty (God's nutritional laws are non-negotiable). Above all, it is a millennialist story of can-do achievement. Our destiny lies within our hands. Just put down the fork and push yourself away from the table.

The meat in the sandwich lies in chapter 4, aptly titled "Pray the Weight Away: Shaping Devotional Fitness Culture." In this chapter, inner grace manifests itself most forcefully and unequivocally in a lean, firm body, which stands as a mark of a disciplined life, a holy people and, above all, right standing with God.

A sampler of the titles produced by the Christian—mostly evangelical-fundamentalist—diet industry in the past half century tells the tale. In alphabetical order:

Devotions for Dieters
God's Answer to Fat: Loøse It!
Help Lord—The Devil Wants Me Fat!
I Prayed Myself Slim
More of Jesus, Less of Me
Pray Your Weight Away
Slim for Him

These and scores of other works, which sell in the millions, have been complemented by religiously based support groups such as Body and Soul, Overeaters Victorious, and 3D (Diet, Discipline, Discipleship), not to mention a cornucopia of dieting paraphernalia—including exercise tapes, work-out clothes, and training manuals—and a never-ending schedule of seminars.

In her analysis of the postwar Christian diet industry, Griffith isolates at least two problems that ought to trouble the conscience. The first is the redefinition of the sins of the mouth. Where once the emphasis was on gluttony (enslavement of the appetites) or disordered desires (longing for a good less than God), now it was on fat. Just that, fat. And so it was that Gwen Shamblin, CEO and founder of Weigh Down workshop, could say, "Grace … does not go down into the pigpen."

For Griffith, the second and more troubling problem is the diet industry's race and class pretensions, intended or not. She shows that the presumed audience was white, sustained by a "racialized ideal of whiteness, purged of the excesses associated with nonwhite cultures." It also was middle- or upper-middle-class, sustained by the affluence and leisure that made costly diet foods and gear (and for women, cosmetic enhancements) affordable.

Those presumptions were not value-neutral. Rather they carried a normative edge that made the firm, angular bodies of an idealized white middle class the rule of thumb for all. Admittedly, a few African Americans, such as T. D. Jakes and Jawanza Kunjufu, joined the crusade. But most of the leaders were white, and most seemed unable to imagine that there might be a difference between good health and (their notion of) good looks, or that economic deprivation and ethnic tradition might play a role in diet options and choices. "In ways both explicit and implicit," she tells us, "white Christian men and women exchanged ideas about how to uphold their image in the world, to sustain their place at the top of the racialized class hierarchy embedded in American society and the Anglo-American Christian tradition." (How the firm, angular bodies of black athletes—ubiquitous in advertising for Nike et al. —figure in this narrative is not entirely clear.)

Though Griffith does not say much about it, there is a Giant Pooka in the story, and it keeps popping up in unexpected places. Bluntly put, the diet industry, Christian and otherwise, is fighting an unwinnable battle. Sociologists, she tells us, have found that religious practice correlates positively with obesity. Christians in general and Southern Baptists in particular are the heaviest. Yet who is surprised? Whole Foods-style supermarkets might be growing, but so are McDonalds. Indeed, I do not recall ever seeing a fast-food franchise boarded up for keeps.

What's not to like about this brilliant and deeply earnest book? Only this: Griffith makes Protestantism the chief protagonist. To be sure, she shows that similar attitudes about body politics crop up among Mormons and, from time to time, Catholics, Jews, and secularists too. Yet she insists that "Protestantism—as the tradition that has most comprehensively influenced the course of American history—takes center stage in this story." This claim raises more questions than it resolves. That a majority of leaders in the diet crusade happened to be Protestants is undeniable. And that the crusade often looked like a Protestant revival also is undeniable. But I see little evidence that the sleek-body promoters drew upon historic Protestant principles, or that they represented the actual life of faith practiced Sunday-by-Sunday in countless Protestant churches. By my lights, the true culprit in this sorry tale is not Protestantism but consumer capitalism gone off the rails. Once upon a time Protestantism had something to do with capitalism's birth, but it should not be forced forever to bear the guilt for capitalism's excesses.

I close on a personal note. Many decades ago one of my U.S. history professors—a scholar well-known for his high-minded support of progressive causes—casually remarked in class that President Taft, "being corpulent, was prone to be lazy." Neither he nor the 200-plus students in the lecture hall noted anything amiss. But I winced. As a lifelong battler of the scales, I suspected that Taft had felt the same desperations I have felt. And since then I have wondered about the many ways that I too might have diminished my students' lives. Marie Griffith's marvelous book will make a lot of people think twice. She has done what many historians aspire to do but few actually manage to accomplish: make this world a more humane place.

Grant Wacker is professor of Church History at Duke University's Divinity School. He is the author of Heaven Below: Early Pentecostalism and American Culture (Harvard Univ. Press).