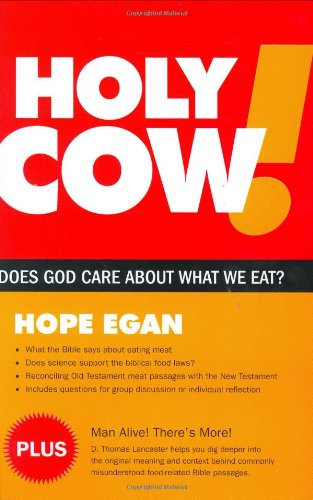 Revenge of the Ebionites

Does God care about what we eat?
November/December 2005

Christian vegetarians can be as selective with their arguments as they are with their food. If you see a couple of them spurning the roast pork at a church potluck, go ahead and pepper them with questions. They're used to it. But be careful. They're good debaters. They have to be quick to spit out their answers in between bites of green bean casserole and broccoli salad.

I should know. I am one. At least, I used to be. I eat meat occasionally, which is enough to disqualify me from the ranks of vegetarian purists. I am also a weak-willed father, so I let my children eat meat. This puts me in a moral dilemma. Do I snatch their leftover meat in order to teach them not to waste food, or do I abstain, in order to teach them that moral principles should be practiced consistently? Usually, it is simply too tempting to satisfy my carnivorous cravings under the convenient guise of frugality.

Eating meat is exciting for me because I do not fall off the veggie wagon very often. When I do, I feel like I am doing something slightly naughty. Try going without a burger for a year, and you will see what I mean. Charred cow flesh has a bewitching power over the senses.

Chances are, you need no convincing. We do not think of meat as an addictive substance, but most Americans cannot go a day or two without it. Once, when my wife was pregnant with our first child, she suddenly demanded fried chicken. I didn't have to be asked twice. The aroma of the bucket I brought home turned our meat-free house into an ancient temple. Even the dog and cat went crazy with smells that conjured up their ancient species instincts. The experience taught me a lot about the primordial appeal of animal sacrifices.

We never heard the end of it from our friends. Why Christian vegetarians should be subjected to special scrutiny puzzles me. Single Christians who defend chastity are not publicly questioned about their personal lives. But as soon as you advocate vegetarianism, someone will ask you if your shoes are made of leather or why you occasionally eat fried chicken.

Hope Egan's Holy Cow! gives semi-vegetarians like me reasons to cheat. While Egan flirts with advocating vegetarianism, she spends only one page on the inhumane practices of factory farms. She is after bigger game. She wants Christians to cut down on their meat and learn about the Old Testament at the same time. She wants Christians to eat kosher.

Egan's style is brisk and her tone warmly personal. What this book lacks in scholarship it makes up for in enthusiasm and packaging. Egan is an editor for First Fruits of Zion's Messiah Magazine, which might explain the attractive cover and the aggressive marketing. Don't be surprised if you find a copy of Holy Cow! (which might be better titled Holy Pig!) placed strategically beneath a jar of bacon bits at your next potluck.

Egan recounts two spiritual journeys. She was raised in a fairly secular Jewish household, but even so, she had to make some sacrifices when she converted to Christianity. The argument of this book is that she did not have to give up her Christianity when she started keeping kosher.

Egan is part of a growing movement of Christians who draw their moral principles from the Torah, the Hebrew law found in the first five books of the Old Testament. These Christians might be called neo-Ebionites, after the 4th-century Syrian group that traced its lineage back to the earliest community of Jewish Christians. The Ebionites honored the memory of James, the brother of Jesus, who was known for not eating meat. They also rejected the teachings of the Apostle Paul. By trying to be both Jewish and Christian, they ended up creating a new religion that was neither, and eventually disappeared from history.

But the Ebionites left behind a fundamental question that still has not received a satisfying reply. If Jews ate only meat that was properly slaughtered, and the atoning death of Jesus replaced the Temple sacrifices, should Christians eat all kinds of meat, or none?

The answer to that question depends on the meaning of the Hebraic purity laws, which comprise the bulk of the Torah. Were they instituted by God to keep Israel separate from her pagan neighbors, or do they have a more universal meaning? When Jesus put an end to animal sacrifices, did he also take the issue of diet off the table? However these questions are resolved, it is fascinating that food issues, especially those involving the eating of meat, are as prominent and controversial today as they were in the time of Paul's missionary travels. Food choices helped drive the earliest Christians out of the synagogues. Now dietary scruples are bringing them back to Judaism for a second look.

To be fair, I should point out that Egan and her group are not, strictly speaking, neo-Ebionites. They honor the whole New Testament and arrive at their position on diet through a strict interpretation of the Bible. The theological options for Christians who want to appropriate some aspects of Jewish tradition are complex, but a simple distinction can be made between Torah-observant Christians and Messianic Jews. The former are Christians who have discovered the Torah, while the latter are ethnic Jews who have discovered Jesus Christ. Both groups challenge their home traditions by stretching them in provocative ways. They converge in their understanding of the intersection of Christ and the law. Egan is surely right that Jesus did not come to abolish every single law found in the Torah. She is also right that the way Christians typically divide the law into the broad categories of moral, civil, and ceremonial has its problems. The Torah was thoroughly moral. Whatever the interpretation of its relationship to salvation, Christians can agree that it pointed the way toward holiness. If that is the case, then how should Christians live the Torah today?

Egan could not have written this book if she were a trained theologian. Most theologians treat dietary questions as a sideshow to the more fundamental drama of the relationship of grace and law. Egan also could not have written this book if she had not been raised Jewish, because most Christians think that the Apostle Paul settled the question of diet once and for all in the early years of the church. While on the Roman roads, Paul had to deal with dietary decisions on a daily basis. His solution was more practical than principled. He clearly knew Christian vegetarians, whom he alternately tolerates and chastizes. They might have been former Jews who decided to give up meat eating after the destruction of the Jerusalem Temple. Paul did not want such a potent dietary choice to come between members of Christ's body.

The numerous and subtle passages in the New Testament that cover dietary issues are a nightmare for both sides in a proof-texting debate. Vegetarians and carnivores can go round and round throwing verses at each other in a verbal food fight. What do we make of the apostolic decree at the Jerusalem Council that required Christians to abstain from ingesting blood (Acts 15:29, 21:25)? What group is being criticized for preaching abstinence from certain foods in 1 Timothy 4:3? What about Peter's vision of the sheet and the voice that says, "Get up, Peter, kill and eat!" (Acts 10:13)?

For Egan, all of these hermeneutical debates can be boiled down to a misunderstanding of the Torah. Some of the law might be outdated, but the dietary restrictions of Leviticus 11, she argues, are eternal. Why? Simply put, the distinction between clean and unclean animals is healthy advice. Egan points out that clean animals tend to be herbivores, while the unclean are omnivores. Scientific studies have established that herbivores are safer to eat.

Is that all this argument is about? To Egan, it seems so. Some theologians (disclaimer: I am one of them) argue that the kosher laws have more theological than medical significance. Sacrificial regulations mediate the original vegetarianism of the Garden of Eden and the Prophets' anticipation of the peaceable kingdom. In this perspective, some form of vegetarianism is a diet of hope and a witness to God's plan for the world. But Egan believes we should refrain from eating pork and shellfish simply because that is God's design for healthy living. This was disappointing news for me, because I reward my (usual) abstention from meat with many opportunities to eat plenty of tasty shrimp, on the grounds that they feel no pain. According to Egan's interpretation of Leviticus, however, shrimp are scavengers and thus dangerous carriers of disease.

What's a conscientious Christian eater to do: embrace the Torah, eat meat as an expression of humankind's dominion over nature, or give up meat as a protest against factory farming? Egan thinks we will eat hamburgers in heaven derived from humanely raised, organically fed, and biblically slaughtered cows. I doubt that, but I also admit that if the Bible favors a vegetarian diet, it does so in a subtle and modest way. The question of a Christian diet cannot be resolved by appealing to the Torah, our right to use animals, or their rights to be protected from us. We have to begin with Christ, and wherever we end, we need to be subtle and modest about our dietary claims.

Stephen H. Webb is author of two books on diet and animals, On God and Dogs (Oxford Univ. Press) and Good Eating (Brazos Press). He is also co-chair of the Christian Vegetarian Association (ChristianVeg.com).