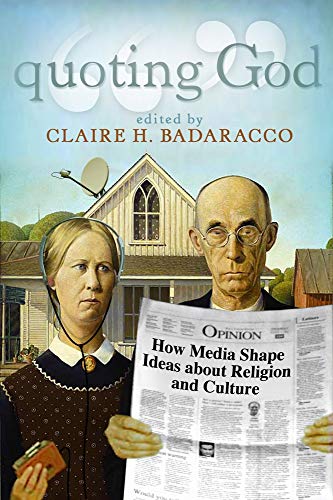 Quoting God: How Media Shape Ideas about Religion and Culture

Religion and the Media

Do they get it?
November/December 2005

In a sense, this collection of essays on religion and the media takes as its text an article from Books & Culture, in which Christian Smith denounced "religiously ignorant journalists."1 Now, that comment was never entirely fair. Although it was and remains true that the media often do an appalling job of covering religion, journalists are not necessarily to blame, and some are outstanding—Laurie Goodstein of the New York Times and Teresa Watanabe of the Los Angeles Times come to mind, but other stars abound. The problem is less with journalists themselves than with the whole process of newsmaking, particularly the manner in which editors decide how particular stories are or are not newsworthy. In consequence, the biggest problem with religion news is not how topics are covered, but rather the vast areas that remain off the radar, until (sometimes) they suddenly appear with nightmarish clarity. A decision not to cover a theme or trend is, by implication, a statement of its insignificance.

The largest area of religious life under-represented by the mass media is normality. Given conventional priorities, the customary and unsensational is not news, so that media stories about Islam are likely to expose terrorism and subversion rather than everyday piety, while according to most media accounts, the Roman Catholic church is either engaging in moral crusades or picking up the pieces after the latest sex scandal. If all an observer knew of Roman Catholicism was drawn from mainstream reporting over the past forty years—or indeed, from the Hollywood productions of that period—what would that person know of the central fact in the church's life, the Eucharist, or how radically the lived realities of the Catholic faith have changed following the liturgical reforms of those years? And the same might be asked of any other tradition. How many media professionals have the slightest idea of the distinctive theological beliefs that characterize evangelicals or Pentecostals, as opposed to knowing the political and sexual prejudices such groups are presumed to share?2

Also, media coverage of any topic, religious or secular, is shaped by the necessity to summarize complex movements and ideologies in a few selected code-words, labels that acquire significance far beyond their precise meaning. Though designed as guideposts for the perplexed, all too often, such words rather tend to stop intellectual processes. One such demon word is fundamentalism, originally a description of a particular approach to reading Christian Scriptures, but now a catch-all description for supernaturally based anti-modernism, repression, and misogyny. Within the past few years, evangelical has been similarly debased, gaining its popular connotations of white conservative politics. (Sorry, African American evangelicals don't exist, and as everyone knows, all Latinos are traditionalist Catholics. Right?) Most pernicious of all, perhaps, is the benevolent-sounding word "moderate," which equates to "the side that we (the media) agree with in any religious controversy, no matter how bizarre their ideas, or how bloodcurdlingly confrontational their rhetoric." In this lexicon, likewise, theological is an educated synonym for nitpicking triviality.

After September 11, the perception that media coverage of religion was selective and tendentious persuaded academics to coordinate their expertise in order to make their expertise more readily available to journalists.3 With its distinguished list of contributors, Quoting God tries to explore the common ground that exists between academics and media professionals, and indicates that the image of mutual incomprehension is far from accurate. The book is organized into three main sections, respectively the legal and constitutional frames that shape the media; the task of reporting across cultures, and the reporter's role as participant/observer; and the media's lack of scientific or theological sophistication. The book tackles very diverse themes spanning cultures and faith-traditions, from Appalachian religious identity to the Aum Shinrikyo terrorist cult, from U.S. media treatments of death to the cultural significance of the Virgin of Guadalupe

It has to be said that the book promises considerably more than it delivers. First, it chiefly concerns reporters or journalists rather than editors or corporate owners, thus favoring a kind of auteur theory of journalism. Nor is as much said as should be about the role of "experts" and commentators, and the means by which certain individuals emerge as the ubiquitously cited authorities on given topics, regardless of the plausibility of their views, or the number of times their analyses and predictions turn out to be dead wrong. It used to be said that a reporter was as good as the contents of his or her Rolodex, the range of contacts and experts on tap, and allowing for changes in electronic technology, that comment is still true. In practice, though, reliance on a few predictable commentators and interest groups mean that stories on a theme tend to develop a stereotypical structure as unchanging as the laws of the Medes and Persians.

In contrast, stories that do not attract such "expert" attention remain under-reported or unconstructed. Compare the reporting of the clergy abuse crisis in the Roman Catholic Church, and the familiar patterns of interpretation applied to those events, with the lack of construction applied to secular counterparts. A story of an erring priest becomes the foundation for a particular analysis of church structures and problems: we already have the story to hand, and need only plug in the name of the latest perp. A parallel tale of a pedophile public school teacher, meanwhile, is reported as the isolated story of a single bad individual, without wider context or relevance. No experts or claim-makers, no wider story.

Also, the book defines "media" in strictly traditional terms, of print and broadcast outlets, with little systematic attention paid to the Internet or the blogosphere (though Paul Soukup offers some thoughts on the Internet in his essay on the Vatican's attitudes to modern forms of communication, as does Rebecca Moore on fundamentalism). However odd this might have sounded to the medium's pioneers, religion and religious activists very rapidly adapted themselves to the Internet, with long-term consequences we are only now imagining. Religion has taken to the Internet like a duck to orange sauce.

At first sight, the book seems to present eleven paired case-studies, with treatments from, respectively, an academic and a journalist, and some of the linkages work very well indeed. For example, Rebecca Moore's discussion of "understanding fundamentalism" is followed by journalist Corey Flintoff's account of modernity and fundamentalism in Mongolian society. Again, Jame Schaefer's study of "Reporting Complexity: Science and Religion" neatly segues into an article by New York Newsday journalist Joe Williams on "Fairness and Pressure Advocacy in Controversial Science." In such instances, academe and media speak to each other, and the encounters are enlightening and stimulating. On other occasions, though, the pairs are oddly matched indeed. Paul Boyer's study of "Biblical Prophecy and Foreign Policy" finds its counterpart "View from the Newsdesk" in Aslam Abdallah's "Post 9/11 Media and Muslim Identity in American Media." Both essays are perfectly solid and readable in their own right, but their juxtaposition is puzzling, and an editor could have mixed and matched the same essays with any number of other pieces in the collection. Despite the apparently careful twinning of professorial and journalistic views, then, it seems better to think of the collection as 22 fairly miscellaneous essays on the theme of religion and the media, some of which are really intriguing. The collection thus comes off as a provocative assemblage of studies, lacking the unity the editor hoped to achieve.

Within these limitations, though, individual essays have a great deal to say. One particularly interesting study (reprinted) is John Schmalzbauer's "Journalism and the Religious Imagination," which uses the familiar division of Analogical (Catholic) and Dialectical (evangelical) imaginations, and applies these concepts effectively to the journalistic profession. In looking at American cultural conflicts of the 1990s, for instance, evangelical writers like Cal Thomas wrote in dialectical terms of "Culture Wars," while Catholics favored dialogue and consensus. Such an approach usefully introduces a critical theme of this entire volume, namely the relationship between the personal faith of the journalist—or the residual faith-tradition from which he or she stems—and the ways in which stories are reported. (Since neither editors nor proprietors are much discussed in this context, presumably they are subject to no such personal or psychological influences.)

The only thing more perilous than being too involved in a particular tradition is, of course, trying to cover religious phenomena that neither the journalist nor his presumed audience actually likes. This issue is nicely raised by Howard Dorgan's exploration of media treatments of Appalachian religious identity, which are all too likely to adopt a freak show approach: see the outrageous snake handlers! Dorgan thoughtfully suggests some ethical rules for media coverage of fringe sects, including "whenever possible, individual members of these congregations should be able to exclude themselves from the films, videos and other forms of recording and … when a particular segment of the film or video is especially embarrassing to one or more members of the congregation, those individuals should be given a chance to place some restrictions on the use of the respective footage."

Arguably, the issues raised here apply with equal force to far larger and more mainstream religious denominations that nevertheless are suspected or despised by the mainstream media. Think for instance of the customary coverage of debates over gender and sexuality in the Roman Catholic church, or other high liturgical traditions. How many stories have been produced through the years on the courageous struggles of women to achieve ordination, or gays to declare their sexual identity? How few, if any, such sympathetic pieces have appeared on the moral stances of leaders or activists on the conservative sides in such debates? Ethnographic sensitivity has its limits.

Though it is not (generally) the fault of either the editor or the authors, Quoting God may leave readers with a misleading impression. The book describes strictly contemporary circumstances, with little historical context, and the unwary reader might conclude that things as they are portrayed here represent a new or recent development, rather than an old-established situation. I honestly wonder if this is so. This lack of context emerges egregiously, for instance, in C. Welton Gaddy's essay on "God Talk in the Public Square," which suggests that religious and explicitly conservative Christian public discourse have become far more common in recent years, above all under the Bush Administration. Though he concedes that religious discourse had its role in bygone years (there was once a man called Martin Luther King, Jr.), Gaddy claims to describe a major rhetorical shift to the religious Right. He is certainly ignoring the continuities through the Carter years, and especially the Clinton presidency. It was the Arkansan who commemorated the victims of the 1995 Oklahoma bombing with the sentiment, "This terrible sin took the lives of our American family, innocent children in that building, only because their parents were trying to be good parents as well as good workers. … [O]ne thing we owe those who have sacrificed is the duty to purge ourselves of the dark forces which gave rise to this evil." Theocracy, anyone?

Has God-talk really proliferated? Are the media really more ham-fisted in religious matters than they were ten or forty or eighty years ago? That would be a wonderful question for a long-term historical study, which is not the goal of this book. The virtue of Quoting God is that it forces us to think about such questions, and to begin the process of answering them.

Philip Jenkins is Distinguished Professor of History and Religious Studies at Pennsylvania State University. His new book, Decade of Nightmares: The End of the 1960s and the Making of Eighties America, is forthcoming from Oxford University Press.

2. David Brooks has a wonderful piece on these issues: "Kicking the Secularist Habit," The Atlantic Monthly, March 2003. www.theatlantic.com/doc/_prem/200303/brooks. Curiously, it is not cited in Quoting God.

3. It was at this time that the American Academy of Religion developed its splendid Religionsource database, www.religionsource.org/Contents/JournalistHome.aspx.