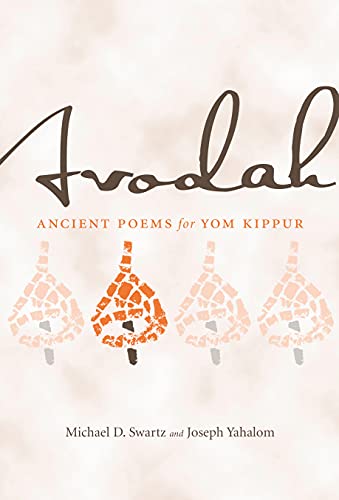 The art historian Meyer Schapiro once told a young poet that the greatest thing about poetry was that it was "written for God." The joke is not just about the marketplace, it's also about the audience, about who cares and who pays attention.

Even the great masters of English religious poetry, William Blake and John Milton, command less attention than a rerun rock concert. Except for verse dramas, poetry is read and experienced one-on-one, and has no authentic social occasion or unembarrassed public moment.

Piyyut, Jewish liturgical poetry, is different. And among the genres of this poetry of worship are Avodah, poems written for the Yom Kippur service. Avodah are first of all versified renditions of the talmudic Mishnah Yoma, the section of the "oral law" devoted to Yom Kippur. They assume an audience of more or less learned Jews gathered on the tenth day of Tishrei to participate in the ritual that atones for all the sins of Israel, personal and public.

That rite is performed against the backdrop of historic loss and a hope for redemption that very well may be as effective as the Levitical scapegoat bearing the collective guilt released to wander the wilderness. Only the Day itself corresponds to the requirements of Torah. How can the Temple sacrifice be performed when there is no Temple? The modern state of Israel is not the Two Kingdoms united under David and divided after Solomon, and its Jerusalem is not a happy home.

Prophecy ceased in Israel with the fall of the First Temple. Rabbinic Sages, the heroes of the Talmud, through ongoing discussion and disputation rather than inspiration, became the illuminators of the word darkened by time. Their legends and methods brought forward the meaning of Torah in the language and experience of the present.

During the Bar Kokhba rebellion in the years following the Roman destruction of the Second Temple, an entire generation of Sages was martyred. Rabbi Akiva, an equal of Moses in the tradition, was flayed alive as he recited the Shema.

Their banishment from Jerusalem set the Jews adrift, but the next generation realized that their oral tradition, like the Torah at the close of the Babylonian Captivity, needed to be written down if it were not to be lost. The Talmuds of Babylon and Palestine, in company with the Masoretic edition of the Jewish Bible, transformed a local cult and dispossessed nation into the People of the Book.

Avodah, dating from about the fourth century, are the poets' response to a practical problem: how can we celebrate rites specific to a place that is no more?

The eight poems in this volume, translated for the first time into English, propound a substitute Temple in poetic space. If Israel will gather in time, the Divine Presence may be called down to an altar in the hearts of the people. Israel will be joined to the Torah in the same way that its sins may be borne by the scapegoat, even though there is no more Temple nor wilderness at hand, nor even an actual sacrifice. It's both a social memory and a communal sublimation.

Michael D. Swartz and Joseph Yahalom, the editors and translators of this collection, do an intelligent and nuanced job introducing the poems, summarizing the scriptural, historical, linguistic, artistic, and hermeneutic traditions that resonate in the Hebrew originals. The sacred poetry is dense and allusive.

What sings in the originals, with their sources in the Prophets and Psalms, can only inform the English. Reading these accounts, broken into verse lines but otherwise prosy, is like encountering Milton or Blake minus the music. In all cases, the more information you have about the text, the more you get.

The Yom Kippur poems begin with an invocation to the Creator, rehearse the history of Israel from the Creation forward, then turn to the preparation of the High Priest, the performance of the sacrifices, and the successful conclusion of the rite of Atonement.

Much of the poets' art involved finding new yet communicative ways to name and invoke biblical and natural matters. For example, "Those aware of good and evil" is a trope for Adam and Eve. Cain is called "The child of thieves." "That which He holds in the hollow of His hand" is water. The technique, called kinnui in Hebrew, resembles Icelandic bardic kennings like "mother of ice" for water.

There is an unvoiced melody in the Talmudic literature that flows from the evenness of its temper, the gravity of disputation, and its resistance to any final disposition. It's found in the suggestion that when painting a wall, some part must be left uncovered, as a token that the Creation is not yet finished.

The divergent approaches to familiar figures in these poems endow the old stories with the power of new prospects. The seminal, epical, and anonymous Az Be-'En Kol ("When All Was Not") portrays the boor (Adam) and the arouser (Eve) as rude and ignorant, rather than as the flawed perfections of the Zohar or, more familiarly, Paradise Lost:

They did not sleep
one night in honor,
for the one who is like a beast
did not understand honor.

They were expelled from Eden
to devour food in sweat,
for pleasure
is not fitting for a fool.

Another unattributed poem, Atah Konanta 'Olam Me-Rosh ("You Established the World from the Beginning"), approaches the same material from the other side of the Divine, the side of mercy:

You formed from the earth
a lump of soil in Your image
and commanded him
concerning the tree of life.

He forsook Your word
and he was forsaken from Eden
But You did not destroy him
for the sake of the work of Your hands.

Three of the poems in this volume were written by Yose ben Yose, a 5th-century payetan (poet). Azkir Gevurot Elohah ("Let Me Recount the Wonders of God") prods the memory of the congregation:

When the Lord conceived,
when God invented,
He consulted but none could prevent Him,
He spoke and none constrained Him.

He speaks and fulfills,
decrees and enacts,
He is strong enough to support it [the world]
heroic enough to bear it.

Atah Konanta 'Olam be-Rov Hesed ("You Established the World in Great Mercy"), another complete Avodah by Yose ben Yose, speaks directly to God on behalf of Israel. It reminds the Creator that the world "will not shatter / … and will not collapse / from the weight of transgression and sin." The poem then points to the Torah, and recalls that

While the earth was still
desert and wasteland,
You amused Yourself with the glow of the Law,
and it frolicked at Your feet.

The sublime in literature, rare in English poetry outside Blake and Milton (though Shelley hits it in "Ozymandias"), abounds in these ancient Jewish poems. And not only in paraphrases of the Creation, or as in a Psalm where the mountains skip like rams. A long passage in the Az Be-'En Kol describes the vestments of the High Priest, the heir of Aaron. Every stone on the breastplate is expounded as a tribe of Israel. After donning the breastplate, the priest who is to conduct the sacrifices of atonement

… put on the sash,
like a belt on his loins,
to cleave the place of fire
to the Fire Consuming Fire.

He wore it on top of it,
Like a dressing for a wound
to wear over a ruin
as vast as the sea.

It was hollow
and made of embroidered work
to revive our hollow corpses
and to stop our slaying.

He girded himself
and concealed its end inside,
like the rivers that go around,
ending at the sea.

"The place of fire" is a metonym for Israel; the "Fire Consuming Fire" is God; the "ruin vast as the sea" is Jerusalem. I can't think of another poem in any language which does so much with a belt on a robe.

Laurance Wieder is the author most recently of Words to God's Music: A New Book of Psalms.