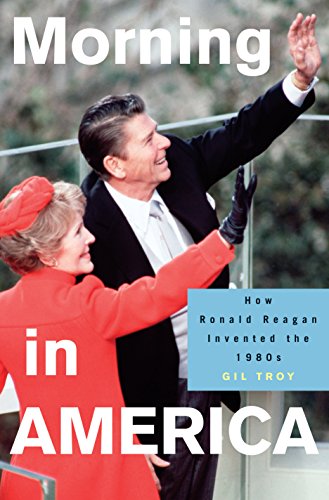 When Ronald Reagan died last year, Senator John Kerry neatly captured the public mood when he declared that Reagan "was our oldest president, but he made America young again." Millions of Americans remembered Reagan not just as an elder statesman but as a kind of secular savior, the man who saved the country from a long period of national traumas and disasters. While "the Seventies" are commonly remembered as a time of weakness and malaise, "the Eighties"â€”the Reagan yearsâ€”are associated with vigorous growth, with a confident assurance epitomized by the president himself. The transition between eras is perfectly symbolized by the cumulative disasters of 1980, the year of the Iran hostage crisis. The message, in short, is that Jimmy Carter led the nation to the verge of ruin, but Ronald Reagan pulled us out of the mess.

It can scarcely be denied that Reagan was a great national leader, arguably the greatest U.S. president of the 20th century (and given greater length, I'd be happy to explain why I would rank him above FDR). Yet having said this, the conventional contrast between the Carter and Reagan years, between decades and presidencies, is much too stark, and overemphasizes the role of individuals. Even if "the Eighties" designates a meaningful historical era, Reagan deserves only limited credit for defining the decade.

In Morning in America, Gil Troy makes an excellent case for Reagan's capacity as a leader, and for the real achievements of his administration. We live in a "Reaganized America." Fortunately, the more of Reagan's notes and speeches that have appeared in print, the less time a historian need waste in confronting the canard about the president as an amiable dunce. Reagan had a sharp mind and a clearly defined sense of historical mission, grounded in fundamental moral and political principles. He was also blessed with the ability to convey his confidence, his evident belief both in himself and in American values. Troy rightly identifies the turning point in the presidency in 1983-84, when the Grenada invasion and the Los Angeles Olympics provided dual foci for renewed patriotism, ably exploited by the White House. In retrospect, even Reagan's cockiest and most implausible visions have been vindicated by history. In all honesty, how many informed analysts in the early 1980s believed that Soviet Communism would evaporate within a decade, or that Reagan's confrontational nuclear policies would really lead to a massive reduction of global tensions? Yet Reagan believed these ridiculous things, and on both points, he was ridiculously right.

Troy's readable book is impressive in its integration of political and social history, while he rightly recognizes that popular culture can provide an effective gauge of the public mood. Thus, he effectively uses the television series Hill Street Blues to illustrate attitudes towards crime and race, and throughout, he uses television, film, and popular music.

Troy is anything but a Reagan cheerleader, and he stresses the still contentious nature of the Reagan record. Apart from the obvious liberal critics, fiercely defensive "Reagan zealots" will challenge Troy's balanced approach. As he dryly remarks, "Studying Ronald Reagan is not for the faint-heartedâ€”or the untenured." To the extent that he is being shot at from both sides, Troy thus emerges as impeccably fair-minded. But I would still argue that his sharp focus on Reagan and the 1980s leads him to over-estimate the presidential achievement.

To take an obvious issue, just how different was Reagan from his predecessor? In terms of popular memory, the contrast seems absurd: the Gipper versus the Wimp. But Carter and Reagan had much in common. Carter was more conservative than is often recalled, and Reagan more liberal. On issues of gender and morality, Reagan had a distinctly moderate record, having endorsed the ERA and opposed California's anti-gay Briggs initiative. His two terms as governor included liberal measures on abortion rights and no-fault divorce, not to mention a fairly progressive tax policy and a respectable environmental record. At times, he looked like the kind of politician the Reaganites were warning about. The two men also shared much in their idealistic moral vision and their religious sense of national purpose. Both saw national problems in moral terms, as issues of the human heart. Neither was reluctant to invoke moral justifications for policy or to see a divine hand in political destiny, and both were attacked for religious sentiments that the secular-minded regarded as naïve or hypocritical.

While any reconstruction of alternative realities must be speculative, we might reasonably ask just how different the America of the Eighties would have been if Jimmy Carter had won the 1980 electionâ€”and that could have happened quite easily. Any number of events might have transformed the political landscape of that year. Carter's Tehran hostage rescue might have succeeded in April 1980, while through the summer, Reagan supporters worried that Carter might arrange an October Surprise, a last-minute diplomatic breakthrough that would bring the hostages home in time for the election.

And in that case, how different would the 1980s have been? After all, the New Cold War was already in progress following the Afghanistan crisis of 1980. Other areas of crisis in the early 1980s would certainly include Poland and Central America, while the United States would have to respond to recent Soviet missile deployments in Europe. It would have been natural for any U.S. administration to try and weaken the Soviet bloc through proxy forces, who would receive clandestine support or training from the United States. Well before the 1980 election, Carter began U.S. support for Afghan mujaheddin guerrillas. In the last days of his presidency, Carter was sufficiently alarmed by the imminent collapse of the Salvadoran regime to restore U.S. military aid. In December 1980, he warned the Soviet government against military intervention in Poland. Throughout 1980, we can discern the stark anti-Communist mood of the Reagan years, the renewed patriotic upsurge, and the quest for decisive leadership.

When comparing the 1970s with the Reagan 1980s, we often forget how many of the characteristic trends and symbols of the Eighties originated in the Carter era, a point rarely made or pursued by Troy. Usually regardless of federal attitudes or policies, America was simply becoming more socially conservative in these years. The drug war, most famously directed against cocaine and crack cocaine under Reagan, originated in the anti-PCP ("angel dust") panic of 1977-78, and was in full flood by the early 1980s. Already under Carter, American society was becoming much more penally oriented, with the dramatic upsurge of incarceration rates, and the restoration of capital punishment. Fears of rape and child sexual abuse, which so reshaped attitudes towards gender and sexuality, again originated in the late 1970s. Increasingly, the roots of domestic Reaganism seem rooted in the debates and conflicts of 1977, in that year's attacks on feminism and electoral attempts to reverse gay rights. Even the AIDS scare, so often cited as the symbolic end of the sexual revolution, was closely prefigured by the herpes panic of 1980-82. Of course herpes was nothing like so lethal in its effects as AIDS, but looking back at the herpes literature now, we must be struck by how precisely it pioneers the rhetoric of the AIDS years, with the language of epidemic, plague, and scarlet letters. Reagan succeeded so thoroughly because he inherited a country alarmed by the extent of recent social revolutions, a country seeking an opportunity to be "scared straight."

In economics too, the Carter/Reagan divide seems much more permeable than Troy implies. It was in late 1979 that the financial policies of Fed chairman Paul Volcker imposed the credit crunch that created the ghastly economic downturn of 1980-82. Reagan was dreadfully unpopular in 1981-82, when the Left enjoyed a significant revival, and Washington and New York witnessed some of the largest demonstrations in their history, especially in the name of the nuclear freeze movement. Reagan's approval ratings approached Carterian levels. But the Fed policy worked, so that the economy returned to boom conditions from late 1982, beginning an eight-year run of splendid success. Often forgotten in this picture is the role of oil prices, which conveniently crashed in mid-decade, reinforcing the U.S. recovery while further crippling the Soviet Union. If Jimmy Carter was still president in 1983-84, he too would have enjoyed a sunny national mood, as the United States basked in historic prosperity. Under whichever party, a confident and wealthy nation would have been far more willing to confront its overseas enemies while suppressing criminals and social deviants at home. Had he weathered the storms of 1980, perhaps Carter would today be enjoying the credit for national salvation that actually adhered to Reagan. Of course, that assumes that Carter would not have exercised his uncanny talent to snatch defeat from the jaws of victory, which he might well have done.

In awarding Reagan the palm as "inventor" of the 1980s, Troy exaggerates the ability of any president to overcome underlying circumstances and trends. In support of this argument, we might point to the more general success of "Reaganite" policies and movements around the world, in nations not subject to that particular administrationâ€”not least in Thatcher's Britain. Such parallels surely suggest that more widespread global trends were in progress, whether economic, cultural, or demographic.

In short, Gil Troy has written a valuable and enjoyable book; but I reject his subtitle.

Philip Jenkins is Distinguished Professor of History and Religious Studies at Pennsylvania State University. His new book, Darkening Vision: How America Retreated from the 1960's, is forthcoming from Oxford University Press.