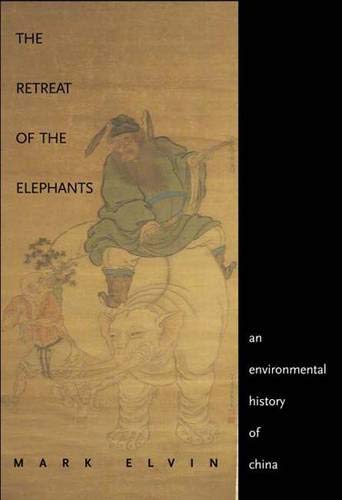 The Retreat of the Elephants: An Environmental History of China
Mark Elvin
Yale University Press, 2004
592 pp., 48.00

From the Archives: John Copeland Nagle

When the Sky Was Orange

An environmental history of China.

The Chinese were even busier moving water. Water was redirected to facilitate irrigated rice production, and watercourses were channeled so that goods and people could be transported to where they were needed. Such human manipulation of hydrology yielded a landscape that was quite different from the naturally occurring environment, but the force of nature was always fighting back against human constraints. During the 16th century, for example, China restructured the lower Yellow River at enormous cost, and with only temporary success. As Elvin writes:

The same skill in water control that had contributed so greatly to the development of the Chinese economy in ancient, medieval, and even in the early part of the late-imperial times, slowly fashioned a straightjacket that in the end hindered any easy reinvention of the economic structure. Neither water nor suitable terrain was available for further profitable hydraulic expansion. … Deadliest of all, hydrological systems kept twisting free from the grip of human would-be mastery, drying out, silting up, flooding over, or changing their channels. … No other society reshaped its hydraulic landscape with such sustained energy as did the Chinese, nor on such a scale, but the dialectic of long-term interaction with the environment transformed what had been a one-time strength into a source of weakness.

China continues to struggle with its water, building the massive and controversial Three Gorges Dam to control flooding on the Yangtze River, and making equally questionable plans to divert the abundant freshwater from its southeastern provinces nearly one thousand miles north to the parched capital city of Beijing.

China's environmental history teaches that seemingly new efforts to address environmental challenges are not so new after all. Consider ecosystem management, the catchword for many current environmental protection efforts. Any suggestion that ecosystem management is a 21st-century innovation is belied by Elvin's account of the previous three millennia of Chinese history. The millions of people who died after the failure of human efforts to control rivers show that "a mismanaged ecosystem can kill on a colossal scale." In Jiaxing, an area of shallow lakes that lies south of the lower Yangzi River delta, "it was human activities that had converted a regularly fluctuating environment into one of artificial equilibrium that needed an attentive government and continual maintenance to keep it under control." In rural Ghuzhou province, a 19th century gazetteer proclaimed that "[w]e have driven away the wolves and foxes, and opened up the rocky mountains and the weedy wastes for farming." That the objects of our efforts to manage natural ecosystems are different now, including preservation of the animals that live there, does not negate the historical evidence that the Chinese have been aggressively managing their ecosystems for thousands of years.

The rule of law as a tool for addressing environmental concerns is also viewed as a new development in China. Again, Elvin shows otherwise. An edict issued in AD 336 stated that "[t]o take possession of the mountains, or to put the marshes under one's personal protection is tantamount to robbery with violence." In 1802, a writer extolling the pine forests in western China insisted that "[i]t goes without saying that they should be protected in perpetuity." The Respectfully Determined Laws and Precedents of the Great Qing prescribed that anyone who "thievishly cuts down the trunks of trees, removes soil or stones, opens kilns for charcoal … or starts fires to burn the mountains for short-term farming, he shall be beheaded as if he had stolen imperial vessels used for sacrifices to the gods." Environmental criminals no longer risk beheading, but they can face other forms of capital punishment. During the 1990's, China imposed the death penalty on several men who were convicted of killing pandas. But just as the precepts quoted by Elvin were widely ignored, the enforcement of China's growing body of environmental laws remains the greatest challenge to the achievement of the rule of lawâ€"in this instance, the rule of environmental law.