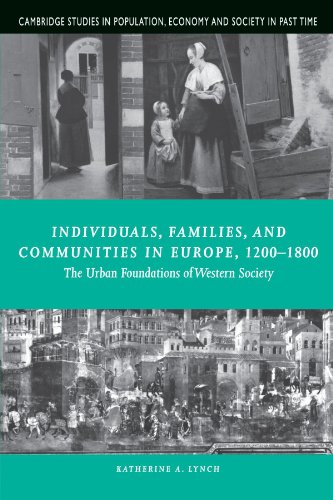 Individuals, Families, and Communities in Europe, 1200-1800: The Urban Foundations of Western Society (Cambridge Studies in Population, Economy and Society in Past Time)
Katherine A. Lynch
Cambridge University Press, 2003
268 pp., 41.88

The Difference the Family Makes

And what the church has to do with it

If you ask the average European woman of child-bearing age how many children she would like to have, you are unlikely to receive the answer "2.1." That number, however, is crucial for European bureaucrats. When women on average bear less than 2.1 children, as has happened in most European countries over the last several decades, the country can no longer reproduce itself and must rely on immigration to keep its population stable and its social system healthy. Retirement benefits and social services require a pool of young, healthy workers to carry the costs; when young workers are missing, how to make up the shortfallthrough accepting more immigrants or encouraging more birthsbecomes a hot political question. Private choices about having babies have worked their way into public debate.

And whether or not to have children is but one personal choice that affects others, suggesting that private choices may not be so private after all. Recently sociologists have noted the myriad decisions that reduce participation in public life in the United States. Social commentators report that rather than joining social, professional, political, or religious organizations, people are spending ever more time in solitary activitieseven to the point of "bowling alone," as the title of Robert Putnam's recent book suggests. The simple, private decision to watch television rather than writing a letter to the editor or inviting a friend to dinner, can have far-reaching consequences for public life.

Much of the literature devoted to European population studies and American public life is cast in terms of decline; the halcyon days of babies and bridge clubs are gone, and all that remains are pensioners and individualists. But how accurate is that declensionist view? What does history have to say about it? Were women having lots more children in years past? What constituted public life in the good old days? How were ties between people built? And why were people involved in their neighbors' lives ...