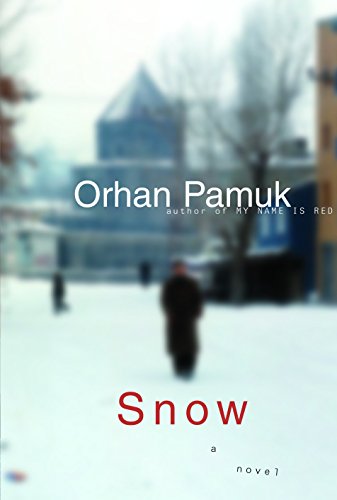 In the Turkish city of Kars, schoolgirls forced to abandon their headscarves are killing themselves. A poet who is also a journalist is sent to cover the story.

The Turkish novelist Orhan Pamuk, like Anton Chekhov and Ivan Turgenev, creates characters who are thoroughly human, sympathetic and unique. His people, and he counts himself among them, are both hostages to personal hope and instruments of historical circumstance; captives of their own convictions and the certainties of others. Like Chekhov, Pamuk deploys a realism that represents the tragic and the comic as the same thing. Like Turgenev, he refuses to allow history or politics to diminish humanity. Neither does he romantically color human weakness or moral lapse. Melodrama is the stuff of distraction. Perfection is the province of monsters and artists.

Snow was finished in December, 2001, and published the following year in Istanbul under the title Kar. The principle definition of kar is "snow"; so it appears in Maureen Freely's artful translation. Besides snow, the dictionary also defines kar as: account; benefit; gain; profit; take; takings; and bank. As a verb, kar means: to do, to make, to create; to produce.

The novel is at first glance a sharply drawn, picaresque political adventure interwoven with a love story and punctuated by odd incident and peculiar violence. Its hero, Ka, is a kind of holy fool for language, a blocked Turkish émigré poet returned from exile in Germany. The plot follows him on journalistic assignment to the provincial city of Kars in Northeast Turkey—adjacent to Georgia, Iran, and Syria, once part of Armenia. There's a municipal election coming up, and a series of suicides among schoolgirls forced to abandon their Islamic headscarves has attracted interest in the Western press. Self-consciously a somewhere that's nowhere now, Kars is the scene of a lot of history, a domicile for religious enthusiasm and long-standing grudge. All the time, it snows.

At second glance, Snow reveals itself as a narrative of classic Arabic-Persian construction—a series of tales-within-a-tale, supremely instanced in the Thousand and One Nights—crossbred with the vertiginously reflexive modern novel, à la Nabokov. The narrator, Ka's longtime friend who later identifies himself as a novelist named Orhan, announces in the first chapter that the story's told as Ka lived it. The significance of the events for Ka, and so for Orhan, derives initially from the depth and quality of Ka's human encounters as he pursues both love, in the person of the beautiful Ipek, and his assignment for the Istanbul Republican.

But it's the return of Ka's poetic inspiration for the term of his stay, the Rilkean angelic speech unbidden and unexpected, that magnetizes Ka's visit to Kars and gives his life narrative meaning. An exaltation may be immeasurable, but that doesn't make it happy.

The poems come to him on the job, or on the way from meeting to meeting. Walking room to room, sometimes in the middle of conversations or interviews with the subjects of his article. Not one comes by willing it. They arrive 19 in all. The connection between the inspirational source and its appearance—between art and life if you will, or truth and speech, or the sacred and profane, eternal and temporal—has a quirky way of sticking an odd elbow through the fabric of being.

One of Ka's journalistic sources is Serdar Bey, the publisher of the Border City Gazette (circulation 320). The Gazette practices a kind of pre-emptive journalism: writing stories about future events in the past tense. When Ka reads an article stating that "Ka, the celebrated poet, who is now visiting our city, recited his latest poem, entitled 'Snow,' " at a live telecast from the National Theater, he objects: "I don't have a poem called 'Snow,' and I'm not going to the theater this evening."

"Don't be so sure," the publisher replies. "There are those who despise us for writing the news before it happens. They fear us not because we are journalists but because we can predict the future; you should see how amazed they are when things turn out exactly as we've written them. And quite a few things do happen only because we've written them up first. This is what modern journalism is all about."

Muhtar Bey, Ipek's ex-husband, is the mayoral candidate for the Party of God. He's also an appliance dealer, and a frustrated poet. When Ka interviews him, Muhtar describes his secret religious conversion at the lodge of the Kurdish sheikh Saadettin Efendi, his discovery of the spiritual key, and his double life as a secularist by day and monotheist by night. Muhtar's conversion led to the end of his marriage (no more sneaking off at night to pray), and to his writing "an important poem. … As a poem it was flawless. I swear to you," Muhtar tells Ka. He sent the flawless poem to a literary magazine, Achilles Ink, but it never appeared.