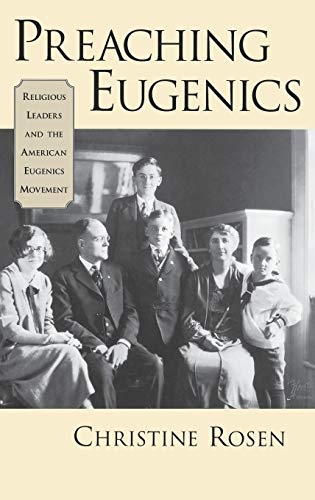 Why did so many American churches embrace eugenics?
July/August 2004

Editor's Note: This review appeared in the July/August 2004 issue of Books & Culture. Advances in biotechnology in the decade since then make it even more timely, alas, than when it was first published.

Have you ever heard the plea, "I want a church where I don't have to leave my mind at the door"? In other words, I will accept religious teachings so long as they do not contradict the orthodoxies of conventional society, the commonplaces of educated opinion. When that opinion runs flat contrary to traditional or scriptural teaching, then secular orthodoxies win every time. In this view, the Bible was put together by quite ignorant folk, constrained by the unscientific worldview of their benighted times, and Christian practice must jog—or gallop—to keep up to date with new secular insights as they develop. When these insights are grounded in the rhetoric of objective science, their claims to allegiance become imperative. That, more or less, has been the justification for many changes in church life over the past few decades, especially in matters of gender and sexual orientation.

All of which gives a powerful relevance to Christine Rosen's thoroughly researched study of the eugenic movement that gained such ideological power in American thought between about 1900 and 1940. In its essence, eugenics meant encouraging the breeding of "good" human stock, while discouraging or preventing the spread of the bad seed that caused such grim consequences as crime, mental deficiency, sexual perversion, insanity, alcoholism, epilepsy, or vagrancy. All were aspects of "degeneracy" that apparently had a close connection to each other—at least they all seemed to manifest in the same degenerate blood-lines. Proper eugenic policy, it was hoped, might deal with a large share of the nation's poverty problem.

Rosen shows the immense influence that eugenic thought had within America's religious bodies, chiefly the mainline Protestant churches, but also among Jews and even some Roman Catholics. Liberals and modernizers, including some of the best-known religious paladins of the era, pleaded for the churches to accept wholeheartedly the implications of eugenic teaching, to support appropriate legislation, to catch up with insights of science and enlightenment. In short, the churches should join the modern world.

Reformers, however, found themselves challenged by antediluvian reactionaries, who rejected the whole process of intellectual modernization, and who even suggested that eugenic doctrines might pose real dangers to civil liberties. Hard though this may be to credit, the reactionaries were so blinkered as to suggest that eugenics itself might be a passing fad, which future generations would dismiss with a shudder.

In retrospect, of course, the reactionaries were exactly right on virtually every point. Now, eugenic opinion came in many shades, and only extremists used the terrifying language of extermination and "lethal chambers." Most advocates were content to eliminate bad seed through sterilization, forced or voluntary. The great majority of eugenicists were neither proto- or crypto-Nazis, and most supported the movement as a means of combating intractable social ills. But even with the best intentions, eugenic arguments were fatally weak at several critical points, and intelligent contemporaries should have known far better than to accept them.

Above all, eugenic theorists did not know the mechanisms of heredity, which were not understood until the 1950s, so they could not hope to achieve the kind of social and biological engineering they sought. Moreover, the evidence advanced to support eugenics was marked at every stage by poor logic and, occasionally, by flat-out fraud. Multi-generational studies of legendary "bad families" like the Jukes and Kallikaks demonstrated an almost willful neglect of the potent social factors contributing to crime and social dysfunction. And so much of the intelligence testing that was used to evaluate human groups exhibited massive methodological flaws, which tended to discriminate on the grounds of class and race.

The ready credence given to eugenic arguments must be explained by the scientific basis that they provided to social prejudices. A eugenicist not only knew that people of his race and class were literally the best in the world, but had science on his side as well. And this same science justified, or actually demanded, the use of draconian legal measures to coerce and restrain the poor, the deviant, and the disturbed. Being the crown of creation is a tough burden, but someone has to bear it.

Nor are these complaints merely the result of post-Hitler hindsight, since all these weaknesses were discussed at length at the time. By far the most systematic critique can be found in G. K. Chesterton's Eugenics and Other Evils (1922), almost every line of which clamors for quotation. Chesterton not only demolished the evidence offered to support the new pseudo-science but also brilliantly analyzed its policy consequences. He shrewdly warned how the rhetoric of therapy and social hygiene in practice permitted total discretion to bureaucrats and administrators, eliminating traditional rights, and placing society under an "anarchy from above." Let no one say that the totalitarian appropriation of eugenics came as a complete surprise.

In its day, Chesterton's title was meant to be provocative or shocking, but in retrospect it seems merely descriptive. Of course eugenics was, and is, a blatant evil. Whoever could have thought otherwise? In fact, as Rosen notes, a great many people bought the eugenic package, including—or especially—in the religious community:

Clerics, rabbis and lay leaders wrote books and articles about eugenics, joined eugenic organizations, and lobbied for eugenics legislation. They grafted elements of the eugenic message onto their own efforts to pursue religious based charity in their churches and adopted eugenic solutions to the social problems that beset their communities.

Especially vulnerable were believers in the Social Gospel, as well as modernists "who embraced modern ideas first and adjusted their theologies later." Thank heavens no such rootless faddists are writing in our own days!

Throughout Preaching Eugenics, we repeatedly find events and phrases that indicate how ordinary and orthodox eugenic views had become. In 1912, Dean Walter Taylor Sumner of Chicago's Episcopal Cathedral demanded that any couple wishing to marry in the church would have to show a "certificate of health" from a reputable doctor. Sumner was no isolated crank. Other mainline clergy issued similar decrees, and further research would certainly produce additional instances. Nor was the dean regarded as a reactionary, since his openness to science clearly placed him in the camp of social and political Progressivism. Equally symbolic of progress and modernity was Harry Emerson Fosdick, nemesis of fundamentalists, who was one of several clerical members of the Advisory Council of the American Eugenics Society (AES). By 1928, the AES published a special "Preachers' Issue" of its magazine, dedicated to proving the harmony between religion and science.

Given such cooperation, it is not surprising to find a convergence of scientific and religious rhetoric in eugenic propaganda during the 1920s. Eugenic themes surfaced frequently in sermons and church tracts, while secular-minded eugenicists borrowed from religious language and idealism, even composing a catechism for the instruction of young people dedicated to race-betterment. Albert Wiggam composed his Ten Eugenic Commandments. Seeing just how easily American churches assimilated these pseudo-scientific doctrines, we must be less shocked by the easy acquiescence of German religious leaders in the 1930s to that nation's particular brand of racial purification.

By no means all Christians were enchanted with the eugenic dream, which at so many points contradicted traditional views of humanity, no less than of charity. Eugenics clearly fostered determinism at the expense of human free will or moral responsibility. But particular churches had their own difficulties with the new movement. The fact that eugenics was so closely tied to evolutionary assumptions naturally alienated evangelicals and fundamentalists, just as predictably as it appealed to liberals and modernists.

Most Catholics were appalled at the movement's easy acceptance of sterilization and contraception, and Catholic lobbying resulted in the defeat of many proposed eugenic laws. Rosen shows that this anti-eugenic fervor was not a foregone conclusion, and some modernizing Catholics were prepared to work with the AES. Generally, though, the Catholic Church provided a firm bulwark against eugenic "reform." When in 1927 the U.S. Supreme Court famously upheld the sterilization of Carrie Buck, the lone dissenter was the court's one Catholic Justice, Pierce Butler. For liberals, such obstructionism proved yet again that the Catholic tradition could never truly be reconciled with secular democracy .As late as 1949, Paul Blanshard's American Freedom and Catholic Power ranted against Catholic willingness to allow defectives and even "monsters" to be born alive, and to be viewed as full human beings.

In the case of eugenics, historical opinion would strongly suggest that the modernizers were dead wrong, and that the churches definitely should not have "moved with the times" or accepted "the insights of modern science." To paraphrase Chesterton, it was only loyalty to traditional Christian beliefs that preserved the individual believer "from the degrading slavery of being a child of his age." The next time someone posits a conflict between science and religion, it would be useful to recall the American experience with eugenics.

In short, believers should not leave their minds at the church door. They should bring their minds into the building, into the service, where they should assess, very carefully, the claims of the secular orthodoxies that are presented as superseding the hidebound bigotry of traditional doctrines. Some of these secular views may well turn out to be valid and lasting. Others, though, will be fads and fancies—or perhaps something much more pernicious.

Philip Jenkins is Distinguished Professor of History and Religious Studies at Pennsylvania State University. His new book, Dream Catcher: How Native American Spirituality Went Mainstream, will be published by Oxford in August.

Copyright © 2004 by the author or Christianity Today/Books & Culture magazine.Click here for reprint information on Books & Culture.