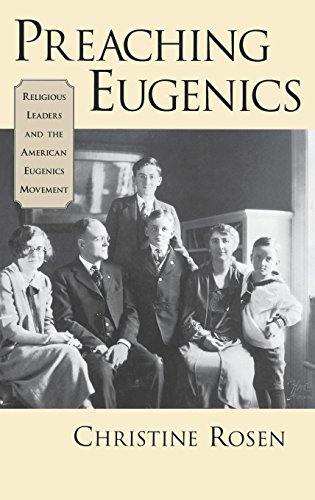 Why did so many American churches embrace eugenics?

Nor are these complaints merely the result of post-Hitler hindsight, since all these weaknesses were discussed at length at the time. By far the most systematic critique can be found in G. K. Chesterton's Eugenics and Other Evils (1922), almost every line of which clamors for quotation. Chesterton not only demolished the evidence offered to support the new pseudo-science but also brilliantly analyzed its policy consequences. He shrewdly warned how the rhetoric of therapy and social hygiene in practice permitted total discretion to bureaucrats and administrators, eliminating traditional rights, and placing society under an "anarchy from above." Let no one say that the totalitarian appropriation of eugenics came as a complete surprise.

In its day, Chesterton's title was meant to be provocative or shocking, but in retrospect it seems merely descriptive. Of course eugenics was, and is, a blatant evil. Whoever could have thought otherwise? In fact, as Rosen notes, a great many people bought the eugenic package, including—or especially—in the religious community:

Clerics, rabbis and lay leaders wrote books and articles about eugenics, joined eugenic organizations, and lobbied for eugenics legislation. They grafted elements of the eugenic message onto their own efforts to pursue religious based charity in their churches and adopted eugenic solutions to the social problems that beset their communities.

Especially vulnerable were believers in the Social Gospel, as well as modernists "who embraced modern ideas first and adjusted their theologies later." Thank heavens no such rootless faddists are writing in our own days!

Throughout Preaching Eugenics, we repeatedly find events and phrases that indicate how ordinary and orthodox eugenic views had become. In 1912, Dean Walter Taylor Sumner of Chicago's Episcopal Cathedral demanded that any couple wishing to marry in the church would have to show a "certificate of health" from a reputable doctor. Sumner was no isolated crank. Other mainline clergy issued similar decrees, and further research would certainly produce additional instances. Nor was the dean regarded as a reactionary, since his openness to science clearly placed him in the camp of social and political Progressivism. Equally symbolic of progress and modernity was Harry Emerson Fosdick, nemesis of fundamentalists, who was one of several clerical members of the Advisory Council of the American Eugenics Society (AES). By 1928, the AES published a special "Preachers' Issue" of its magazine, dedicated to proving the harmony between religion and science.

Given such cooperation, it is not surprising to find a convergence of scientific and religious rhetoric in eugenic propaganda during the 1920s. Eugenic themes surfaced frequently in sermons and church tracts, while secular-minded eugenicists borrowed from religious language and idealism, even composing a catechism for the instruction of young people dedicated to race-betterment. Albert Wiggam composed his Ten Eugenic Commandments. Seeing just how easily American churches assimilated these pseudo-scientific doctrines, we must be less shocked by the easy acquiescence of German religious leaders in the 1930s to that nation's particular brand of racial purification.

By no means all Christians were enchanted with the eugenic dream, which at so many points contradicted traditional views of humanity, no less than of charity. Eugenics clearly fostered determinism at the expense of human free will or moral responsibility. But particular churches had their own difficulties with the new movement. The fact that eugenics was so closely tied to evolutionary assumptions naturally alienated evangelicals and fundamentalists, just as predictably as it appealed to liberals and modernists.

Most Catholics were appalled at the movement's easy acceptance of sterilization and contraception, and Catholic lobbying resulted in the defeat of many proposed eugenic laws. Rosen shows that this anti-eugenic fervor was not a foregone conclusion, and some modernizing Catholics were prepared to work with the AES. Generally, though, the Catholic Church provided a firm bulwark against eugenic "reform." When in 1927 the U.S. Supreme Court famously upheld the sterilization of Carrie Buck, the lone dissenter was the court's one Catholic Justice, Pierce Butler. For liberals, such obstructionism proved yet again that the Catholic tradition could never truly be reconciled with secular democracy .As late as 1949, Paul Blanshard's American Freedom and Catholic Power ranted against Catholic willingness to allow defectives and even "monsters" to be born alive, and to be viewed as full human beings.