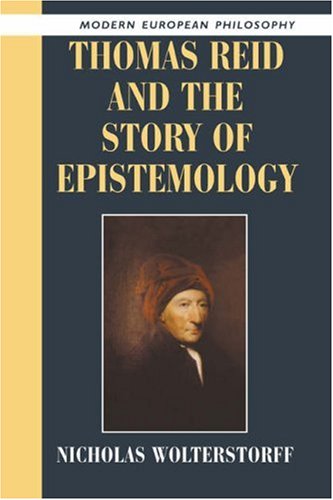 Locke and Reid as our epistemological forebears.

Nicholas Wolterstorff, recently retired as Noah Porter Professor of Philosophical Theology at Yale, is arguably contemporary Christianity's most versatile philosopher. He has been noticed for metaphysics (On Universals [Chicago, 1970]); recognized for his work in aesthetics (e.g., Works and Worlds of Art [Oxford] and Art in Action [Eerdmans, both 1980]); noted (and notorious) for his defense of the marginalized, and especially Palestinians (Until Justice and Peace Embrace [Eerdmans, 1983]; respected for contributions to philosophical theology (Divine Discourse [Cambridge, 1995]); and praised for his championing of Christian education (Educating for Responsible Action [Eerdmans 1980] and Educating for Life: Reflections on Christian Teaching and Learning [Baker, 2002]). He is perhaps best known, however, for his work alongside William Alston and his old college buddy Alvin Plantinga in developing one of the most important theories of knowledge of our day, the so-called Reformed epistemology (Reason within the Bounds of Religion [Eerdmans, 1976] and several co-edited books).

In the service of the latter agenda, Wolterstorff has also demonstrated an extraordinary ability at the history of philosophy. What he has uncovered in what he calls "the archaeology of cultural memory" is both startlingly revisionist of what we all thought we knew about modernity and bracingly relevant to our own immediate concerns. In particular, Wolterstorff's findings dispute commonly held stereotypes of what "modern thinking" is, and they point toward instructive and exciting alternatives to arrogant forms of both modern and postmodern thought.

Wolterstorff has produced two volumes in the last several years, each of which deals with a major figure in modern philosophy: John Locke and the Ethics of Belief and Thomas Reid and the Story of Epistemology. These full-length monographs are, in an important sense, preliminary chapters in Wolterstorff's magnum opus of epistemology—the completion of which ...