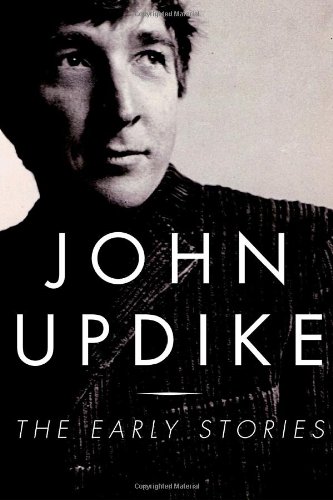 Why Everyone Used to Read Updike …

And why his best stories are still worth reading.
January/February 2004

I agreed to review John Updike's The Early Stories: 1953-1975, at over 800 pages the longest book I have read, to get some insight into why he was once so influential. Because in the ten or so years of my literary consciousness, the years in which I have been a writer and talked about books with other readers and writers, Updike's name only gets mentioned in the question, "Who reads Updike anymore?" Those frequent short stories that grab New Yorker space from younger, fresher voices, and those novels appearing at regular intervals, are not read by anyone I know. In college, a few of my friends passed around a copy of Memories of the Ford Administration—that would have been 1993 or so. Since then, Updike has written Brazil, Toward the End of Time, In the Beauty of the Lilies, Gertrude and Claudius, Seek My Face, and assorted others, yet of all my friends who enjoy contemporary fiction—a catholic group comprising devotés of Michael Chabon, Evan Connell, Don DeLillo, Jonathan Franzen, Kazuo Ishiguro, Diane Johnson, David Lodge, Tim O'Brien, Philip Roth, Jane Smiley, Robert Stone, David Foster Wallace, and other literary lions—not one has read a John Updike book published in the past ten years. I have one friend who has read the Rabbit tetralogy, completed in 1990, and I myself have read several of the old books, plus his terrific memoir Self-Consciousness. But except perhaps for Nicholson Baker, who so admires Updike that he devoted a fascinating book, U and I, to his Updike obsession, younger writers and book lovers do not read John Updike.

They once did, and I got a sense of why by reading this omnibus collection of stories, spanning the period from his Harvard graduation through his heyday in the Sixties—when The Centaur and Couples were titles to conjure with—all the way up to 1975—"an apt cut-off," he says in the introduction, for "it was the one and only full year of my life when I lived alone. My marriage of some twenty-plus years, to a barefoot, Unitarian, brunette Radcliffe graduate was ending, but all of these stories carry its provenance."

If we are to permit ourselves some modest historicism, we may infer from his stories that marriage was from the beginning a trial for Updike. Perhaps he married the wrong woman; perhaps he was just too young; perhaps the institution did not suit him, at least the first time around. But marital problems, infidelities, and uncertainties are the common stuff of these stories, and I think that the stories appeal to people interested in connubial trial. The great, early triumph of Rabbit, Run, about a young small-town husband desperate to break free of his wife and two children, was the archetype, prefaced and succeeded by stories and novels concerned with the same themes.

To put a finer point on it: Updike began writing when his generation of white Christian males, having fought in the Korean War, was returning home to the outwardly staid domesticity of Eisenhower's America. They married young and did as they were told. They hardly ever divorced, and then only under the guillotine of shame. At first, Updike wrote of these men as adolescents, college students, and the young married; the typical protagonist is a Lutheran or Calvinist boy in rural Pennsylvania, or that same boy a little grown up. The author's powers grew—as this collection makes clear—during the Sixties, when his stories took notice of the tremors of civil rights activism and, then, counterculture; they capture wonderfully the bemusement of parents looking at their long-haired children, or trying to be progressive in their encounters with local "Negroes."

Updike reached his career apogee as a chronicler of Nixon-era sexual revolution and the new freedoms of women's liberation. His specific vantage point remained the same: men born around 1930, plus their wives, all wistfully wishing they were teenagers again, trying to grab a little of that sexual freedom even though they had several children and marriages of long standing. And so, Updike's fictions appealed, I believe, to those who responded to the specific theme of entrapment. If you've been trapped in a marriage, trapped in a bland career, or trapped with cosmopolitan yearnings in a containing suburb, then Updike is the poet of your condition.

It becomes a simple matter, then, to explain why I don't know any thirty-ish people who read Updike. Easy and common divorce rendered Updike's great theme antiquated. Nobody is that trapped any longer. If we do not like our relationships now, we quit them.

All writers write from their time and circumstance, of course, and the demise of American whaling hardly ruins Moby Dick. But Updike's fiction—dense with detail, so lovingly crafted and perfectly described—is difficult to abstract from its time and place. An even more intricate writer than Updike, Vladimir Nabokov, is saved from this problem by dealing, in his strangeness, with more universal themes. Updike writes himself into a time and place and problem—say, treacherous infidelities in 1973 in northern Massachusetts—with a fastidiousness congenial to lovely time pieces rather than timeless truths. Yes, we can move into old houses, but only when they allow room for updating: I could happily live in a 1974 split-level, but not if it were decorated in 1974's orange and brown fabrics.

Updike's stories are thus strongest when they are removed from the specificity of midlife marriage and childrearing. Youth and old age more easily allow for the timeless aura of fable Updike can perfectly create. His first, widely praised novel, The Poorhouse Fair (1959), is a futuristic allegory about a poorhouse for old people. His early stories, haunting and spare, first collected in Olinger Stories and reprinted in the present edition, are by far his most memorable. The classic "Pigeon Feathers," in which a young boy's religious skepticism is challenged by the act of shooting pigeons in his family barn, manages to be a work of the most vivid local and personal charm and, at the same time, a universal story of the angst suffered by young children smart enough to question God.

The eccentric Harvard roommate described in 1963's "The Christian Roommates" might have been the crazy, brilliant, mismatched roommate who drifted, with an otherworldly charm, into many of our college lives. In fact, Henry Palamountain has the same effect on his roommate, the South Dakota dentist's son Orson Ziegler, that my Arkansas friend Basil Virgil Hicks III had on me: to remind a practiced book learner that conformity is not the key to all knowledge. When you are 18, that's a profound point—and later in life, it isn't necessarily obvious.

Palamountain is a vegetarian, yoga-practicing, conscientious objector; Hicks was a taco-eating, varsity-swimming philosophy major who would oversleep and miss final exams because he had been awake all night taking apart his mountain bike and reassembling it on our living room floor, enraptured by the perfectly calibrated gears. Palamountain became the pastor of an urban parish; Hicks, the grandson of a Presbyterian preacher, now teaches chemistry at Central High School in Little Rock. Maybe not everyone lived in college with such a weird, holy presence, incongruously sent by God, like the black Jew in Bernard Malamud's "Angel Levine"; but if at any time in your life you were thrown together with someone whose purpose seemed to be to lift your thoughts toward the eternal, then you'll respond to Updike's story as I did, with blinding recognition.

Many of Updike's finest stories deal squarely with religion. Not in the facile sense in which so many great writers say that they write about religion; even Norman Mailer has said that religion has always been his central theme, but it's hard to see how. Updike's characters were raised in church, and they want truly to believe in God, but the disciplines God requires inhibit the joy he is supposed to bring. In Rabbit, Run, Rabbit Angstrom must decide between obeying his heart, which counsels him to leave his wife, or his minister, who badgers him into returning. In the later stories, marriage becomes a stand-in for religion: instead of trying to honor God, Updike's protagonists try to honor their marriages, and they sin by straying. But in realist fiction, adultery is actually the most boring, and dated, of topics. That Updike helped give it currency does not mean that he escapes its clichéd status.

It is their genuinely religious sense that makes Updike's best early stories different from, if not better than, classics of gray-flannel-suit repression like Evan Connell's Mrs. Bridge and Richard Yates's Revolutionary Road. Walter and India Bridge and Frank and April Wheeler have no sense that their dilemmas trouble God or gum up some ordained order in the world. They are looking for happiness, while Updike's boys and men are looking for godliness: they want to do right by the world. Less cynical yet more worldly than his fiction from the swinging years, pitch-perfect and musical in metaphor, these stories retain the power to remind us of ourselves.

Mark Oppenheimer is the Koret Young Writer on Jewish Themes at Stanford University. His book, Knocking on Heaven's Door: American Religion in the Age of Counterculture, was published by Yale University Press in October.