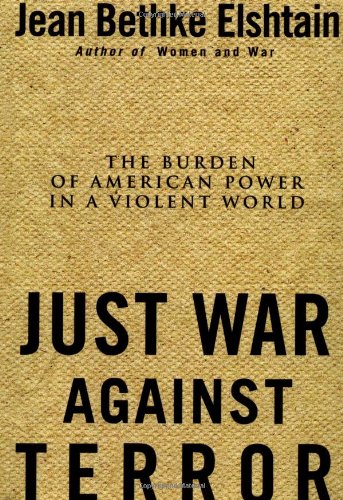 A conversation with Jean Bethke Elshtain

In her book Just War Against Terror: The Burden of American Power in a Violent World (Basic Books), Jean Bethke Elshtain critically examines responses to 9/11 and its aftermath, particularly from the academy and from church leaders, and makes the case for the principled use of force in the just war tradition. The book was published very soon after the U.S.-led coalition invaded Iraq, and it is sharply relevant to the ongoing debate about U.S. policy there. Elshtain, the Laura Spelman Rockefeller Professor of Social and Political Ethics at the University of Chicago, spoke with Michael Cromartie early in the summer.

How would you assess the debate leading up to the war in Iraq?
It was, in many respects, quite extraordinary. Serious discussions were held in coffee shops and the halls of Congress. The fact that the Bush administration tried to work through the UN meant the issue dragged out for a considerable time. (Much easier to bypass the UN altogether, as the Clinton administration did when it commenced hostilities against the Serbs using NATO as cover.) Within the just war tradition, serious airing of issues, including whether a justifiable casus belli pertains, is a good thing.

That said, the debate was also disappointing, especially if one looks at the official statements from our churches. First, these statements were forthcoming without anything like widespread consultation with "the pews," so to speak. How else to explain the huge disparity on the war issue between the vast majority of ordinary Christians and the leadership of various denominations? Second, the just war tradition either was not referenced seriously or was actually misstated. I mean the criteria were distorted and the many complexities, subtleties and nuances of just war fell out. The notion that you must be directly attacked in order for a casus belli to pertain is wrong, for example. A strict interpretation of that requirement would mean we shouldn't have gone to war against Hitler's Germany, either: ...