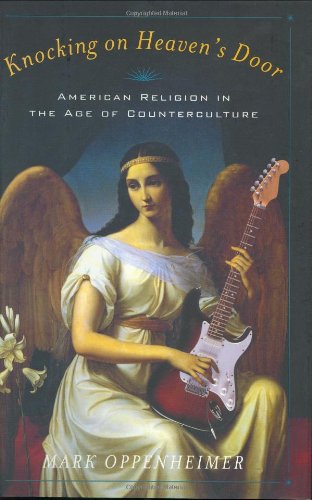 How the Counterculture Went to Church

In Knocking on Heaven's Door, Mark Oppenheimer offers a well-written and consistently interesting, if not always persuasive, account of America's most recent religious awakening. In five case studies, Oppenheimer seeks to demonstrate that the religious impact of the counterculture that blossomed in the 1960s was both deeper and more complex than has been widely supposed.

Oppenheimer begins with the Unitarians. Before gay rights became the stuff of Supreme Court decisions—indeed, even before the issue became central to gays themselves—the Rev. James Stoll announced his sexual orientation to a group of college-age Unitarians in 1969. Nothing ought to be surprising about that, given the degree to which Unitarians are reluctant to judge anything—except perhaps conservative religion itself—as sinful. Still, Americans in 1969, even very liberal Americans, were generally quite queasy about homosexuality. In addition, Stoll, as Oppenheimer writes, was "probably a sexual predator." Despite all this, Unitarian churches and fellowships, before long, had so intertwined themselves with the counterculture that it became impossible to say where one ended and the other began.

Oppenheimer turns next to the introduction of folk music into the Catholic Mass. Although the Catholic Church was a bastion of conservative support for American values, many of the country's most famous new leftists—most notably, Mario Savio of the Free Speech Movement and Tom Hayden of Students for a Democratic Society—were raised Catholic. Protests against the Vietnam War were led by radical priests such as the Berrigan brothers, Daniel and Philip. Mary Daly was among the first feminists who made religion her special concern.

Against such explicit forms of political radicalism, the Church generally stood firm. But in the aftermath of Vatican II, officials were responsive to liturgical reforms, opening the door to guitar-strumming folk singers like Sister Miriam Therese Winter and Joe Wise. Some parishes, such as Cincinnati's Community of Hope, devoted themselves to upbeat (and unorthodox) ways of celebrating Mass. Although their particular innovations have largely died out, their influence, Oppenheimer argues, lives on; ordinary Catholics have become receptive to more open musical styles that would have been viewed as anathema by the originators of the Tridentine Mass.

For Jews, countercultural movements took the form of havurot, small-group fellowships usually meeting outside of, and sometimes in defiance of, the synagogue. Freedom seders and feminist interpretations of ritual offered a way for Jewish young people to honor their upbringing even while joining the kinds of protest movements to which Jews have always been attracted. Like the alternative Catholic liturgies, most havurot went out of business after roughly ten years of experimentation and excitement. But those who led them, in significant numbers, went on to become major scholars and rabbis in more conventional forms of Jewish observance.

Oppenheimer's fourth case study examines the conflicts over women's ordination in the Episcopal Church. We tend to think of mainline Protestants these days as automatically sympathetic to feminism, but there was in fact fierce resistance to ordaining women among many Episcopalians, both laypeople and clergy. Faced with the prospect of ever-escalating internecine warfare—many of the women who felt called to the priesthood were nothing if not determined—Episcopalians accommodated themselves to the seemingly inevitable. Here the influence of the counterculture, as Oppenheimer tells the story, was palpable: "Seeing women celebrate the same ritualistic, ceremonial Mass, hearing them intone the same words: this was a visual and aesthetic shift, and it changed the Episcopal Church more surely than the updated 1979 Book of Common Prayer did."

Oppenheimer's final study deals with anti-Vietnam protestors in the Southern Baptist Convention. Theirs was not necessarily a hopeless cause. Dissenters had on their side a history of Baptist unease with war and violence, as well as a church organized congregationally and therefore presumably open to hearing from local members. But the SBC, increasingly conservative both theologically and politically, showed little interest. Southern Baptist congregations were well represented among the soldiers fighting and dying in Vietnam and for the most part had little or no sympathy for those who protested against the war. The only significant relationship between the sbc and the counterculture grew out of the efforts made by some preachers to proselytize among hippies and drop-outs. Unlike Unitarians and Jews, Baptists were not to be transformed by dissenting voices from within their tradition.

These are absorbing stories, and they call out for a sweeping interpretation. Oppenheimer's conclusions, alas, are not as captivating as his case studies. True, his research often leads him to interesting counterintuitive observations—for instance, that hierarchically organized churches are often more open to change than congregationally based, and thus presumably democratic, ones. And Oppenheimer tells his stories with considerable fairness, even toward those to whom (one supposes) he is unsympathetic. Still, I found some of his decisions puzzling, especially the one that led him to begin with the Unitarians. That America's most liberal denomination embraced the spirit of the 1960s hardly counts as news. And if one concludes that the same could be said for Jews, who were in the forefront of the counterculture in so many ways, then 40 percent of Oppenheimer's case studies are not all that helpful.

His decision to discuss the Southern Baptists makes sense, yet he treats the sbc in an all-too-predictable way. As an alternative, he might have considered Saddleback, America's most fascinating megachurch. A member of the sbc, Saddleback is also, in its own way, countercultural. True, Pastor Rick Warren is in many respects culturally conservative, but he has borrowed liberally from the therapeutic culture of the 1960s. Indeed, one of the fruits of the counterculture is the existence of a category called "self help" on the New York Times' bestseller list. Rick Warren's The Purpose Driven Life: What on Earth Am I Here for? has been featured there for some time.

Conservative religious groups, in short, have been influenced by the counterculture as much as their liberal counterparts. Orthodox Jews found themselves attracted to the mystics in their tradition. Conservative Catholics like Hutton Gibson (Mel's father), who oppose the spirit of Vatican II, have, in their persistent dissent, something of the countercultural about them. Neo-Pentecostal movements like Calvary Chapel have their origins in the Jesus People. Compared to these examples, there is something staid, even conservative, in the efforts of mainline Methodists and Presbyterians to hold fast to their denominational teachings. Perhaps the truly countercultural churches in America today—representing the counter-counterculture, we might say—are those that disdain rock music, not those, like so many presumably conservative evangelical churches, that rely on it for half their Sunday service.

Even after the seemingly endless flow of books devoted to the legacy of the 1960s, much remains to be understood, particularly concerning the influence of the counterculture on American religion—and hence on much that is distinctive about America at the beginning of the 21st century. This book finds itself touching on issues that, to be fully addressed, would require far more analysis, comparison, and history. But its topic is so important that any solidly researched and compelling account of even its smaller manifestations is welcome. Knocking on Heaven's Door certainly is.

Alan Wolfe directs the Boisi Center for Religion and American Public Life at Boston College. He is the author most recently of The Transformation of American Religion: How We Actually Live Our Faith (Free Press).