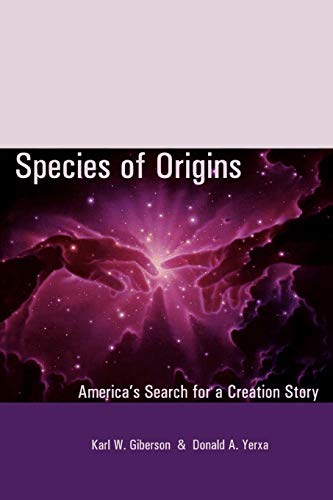 While writing this review, I am proctoring the final exam for my course on the history of science and religion. And as I look out over my students, their brows furrowed in thought, the value of Species of Origins by Karl Giberson and Donald Yerxa becomes apparent.

I teach at the University of Georgia, the flagship school in the state's higher-education system. My class is mostly composed of honors students reared in the American South. Many of them are deeply religious—about half claim to attend Protestant church or fellowship meetings regularly. I can count on a few of these to jump to the defense of Genesis during class discussion. The University of Georgia is a state school, however, and many of my students are nonreligious or even anti-religious. Some of them roll their eyes in response to the biblical apologetics of their evangelical Protestant classmates.

In short, my class reflects the mix of beliefs that characterize the New South, which remains the most religious region of the country but is no longer monolithically so. All manner of belief and disbelief cohabits here. After all, my students say, this is Georgia, not Alabama! Little do they know that Alabama students would say something similar, perhaps about Arkansas. Species of Origins speaks to such an audience, whether at a state university in the Deep South or an evangelical Protestant college in the Northeast (where the authors teach).

In recommending this book for my students, I do not recommend it for everyone. Indeed, the authors had a particular audience in mind when they wrote this book: their own students. They kept their eyes fixed on this audience throughout, and succeeded in authoring a serviceable introductory text on a profoundly complex subject. People of various ages and backgrounds could benefit from being their students. This book serves as the next best thing for those of us not enrolled in their courses.

It is Giberson and Yerxa's thesis that multiple theories of origins compete for the American mind at the dawn of the new millennium. Some of us believe in young-earth creationism; others in some sort of theistic evolution or progressive creationism (slippery terms with different meanings to different people); and still others in naturalistic evolutionism.

Leading a discussion-based course in science and religion has taught me at least one lesson. Regardless of their stance on the issue, Americans (including honors students at a leading Southern state university) typically possess little detailed knowledge about their own conception of origins—and know virtually nothing (except perhaps murky negative stereotypes) about any competing theories. In the words of Sam Cooke's song from the Sixties, they "don't know much about history; don't know much biology; don't know much about a science book." This goes for self-professed Darwinists as well as creationists. Most could not pass a snap quiz on the fundamentals of their science. (Theistic evolutionists and progressive creationists probably would do the worst.) With this book, the authors seek to redress this situation without proselytizing for any particular viewpoint (though their inclinations are clear).

Giberson and Yerxa open with the creation story of modern science. In the beginning the Big Bang spawned wholly naturalistic processes that ultimately

generated humans, and Harvard biologist Edward O. Wilson said it was good—or something along those lines. "Most of the story is quite well understood and is supported by a wealth of scientific data. Even the more speculative parts are not without empirical support," they stress. "And yet, when pollsters ask Americans if they believe the scientific creation story, they answer, in overwhelming numbers, with a resounding 'NO!' How can this be?"

Although they betray their skepticism about the sufficiency of naturalistic processes to account fully for organic development, Giberson and Yerxa clearly favor the scientific story's basic chronology. They emphasize that virtually all scientists in every discipline agree on about ten billion years for the universe (some would extend that span by several billion years), five billion for the earth, a half billion for multi-celled organisms, and about one hundred million years for Homo sapiens. Against this timetable, they pit the tenets of Henry M. Morris and the scientific creationists associated with his Institute for Creation Research.

For simplicity, Giberson and Yerxa focus on Morris as the author of the modern fundamentalist creation story, though Morris would surely defer to Moses in that respect. In a series of three hardhitting chapters, the authors establish Morris' religious commitment to a literal six-day creation within a strict biblical time frame; lay out the scientific dimensions of Morris' creationism as largely a sustained critique of evolutionary naturalism; and detail the narrow, conspiracy-theory mentality that underlies Morris' vilification of evolutionism as the diabolical source of virtually all social ills.

It's not a pretty picture. But Giberson and Yerxa are just as hard on the alternative offered by such naturalistic scientists as Wilson, Richard Dawkins, and Stephen Hawking. Returning to the creation story of modern science, Giberson and Yerxa now call its proponents the "Council of Despair" for their starkly reductionist picture of life. "We are but selfish genes in a purposeless world, matter become conscious, fighting a powerful delusion that we are here for a purpose," the authors state in summary of this view. No wonder Americans reject it. "Is there a middle ground?" the authors ask.

In the final third of the book, Giberson and Yerxa turn to the so-called "muddle in the middle," leading into a detailed examination of the intelligent-design paradigm. Gaps in the biblical narrative, age-long days of divine creation, and various divinely guided forms of evolution compete for attention here. After offering quick glimpses of these various middle-ground concepts, the authors focus on the modern intelligent design movement, which they trace back to the mid-1980s and present as blossoming in the 1990s with the work of Phillip Johnson, Michael Behe, and William Dembski.

Giberson and Yerxa see the intelligent design movement as having "attracted so much attention that it has succeeded in dominating the origins debate" since the early 1990s; indeed, they suggest, it is "setting the agenda for much of the debate." This may be true at Christian colleges, but not in general. Certainly Giberson and Yerxa can cite sympathetic articles about intelligent design in The Wall Street Journal, First Things, Christianity Today, and the like, but such publications are among the movement's natural allies.

After seeming to fall under the influence of Johnson's prose, Giberson and Yerxa revert to their customary critical mode. They note that intelligent design has made virtually no inroads into secular science. Although "there is a growing body of serious literature assessing intelligent design," they conclude, "most of this literature is quite critical, and the rest is produced by identifiable design theorists." And if they looked at America's conservative Protestant subculture, they would see that while Johnson's attacks on evolutionary naturalism are welcome as far as they go, Ken Hamm's Morris-inspired Answers in Genesis ("a ministry begun in 1994 to proclaim the authority of the Bible from the very first verse," via books, cassette tapes, radio broadcasts, and other media) continues to gain more adherents at the grass roots.

Species of Origins provides Christian students with a portal into the origins debate that swirls about them in college and (perhaps) church discussion groups. Issues are presented from a perspective that evangelical Protestants can appreciate. By not taking a stand in the end, the book leaves students free to adopt their own reconciliation of science with religion in the light of greater understanding of the alternatives. As I grade their exams, I see that most of my students have done just that. Giberson and Yerxa would surely see that as their goal as teachers.

Edward J. Larson is Russell Professor of History and Talmadge Professor of Law at the University of Georgia. He is the author most recently of Evolution's Workshop: God and Science on the Galapagos Islands (Basic Books).