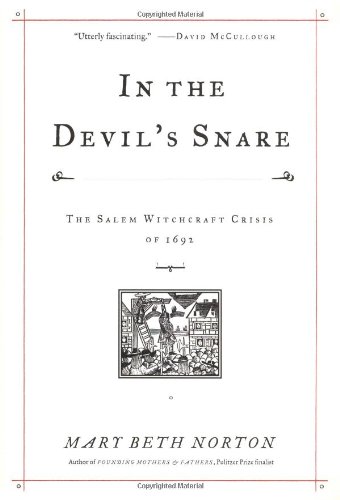 What Happened in Salem?

Over the past couple of decades, scholars have been reinterpreting colonial American history in the light of the intimate encounter between the colonists and the Native Americans they married and buried, learned from and taught, fought with and against, killed and were killed by. Now a distinguished historian, Cornell University's Mary Beth Norton, provocatively proposes that this interpretive turn allows us, for the first time, to understand properly one of the most exhaustively studied episodes in American history: the Salem witch trials.

Sevententh-century New Englanders believed that people sometimes covenanted with Satan to acquire the powers of witchcraft. That this assumption was nearly universal in Massachusetts made it no different from other European societies, where witches had been prosecuted, tortured, and executed with some regularity since at least the 11th century. But there is no doubt that something strange occurred in Salem in 1692—by far the largest outbreak of witchcraft accusations, prosecutions, and executions in colonial North American history, with 19 people dying and hundreds more accused before the trials were stopped.

So what happened in Salem? The question won't go away. From Nathaniel Hawthorne's "Young Goodman Brown" to Elizabeth George Speare's oft-assigned tale, The Witch of Blackbird Pond, the witch trials have inspired some of America's most popular writing. The Internet, predictably, features all manner of sites devoted to the Salem crisis, from National Geographic's "Salem Online Witchhunt Game" (which allows players to imagine what it would be like to be accused) to a "Salem Tarot" page that offers a "Tarot reading with a Salem Witch" for $45 per half-hour. The town of Salem itself has not hesitated to capitalize on its tourism potential, featuring no less than five museums devoted to witchcraft.

Most Americans who know anything about the Salem witchcraft crisis probably have had their impressions shaped by Arthur Miller's 1953 play ...