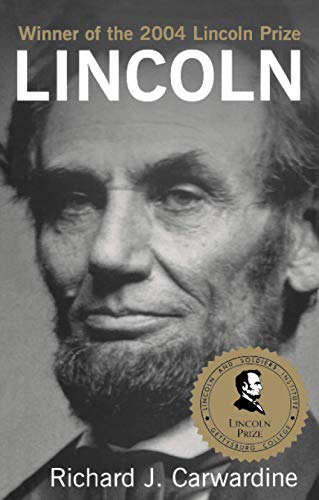 Nearly a decade ago, in the inaugural issue of Books & Culture, Mark Noll surveyed the seemingly endless proliferation of Abraham Lincoln studies. One factoid will suffice. In 1950, at least 500 persons were earning their living from collecting Lincoln materials, publishing Lincoln books and articles, or tending Lincoln shrines. Since then, the statistics have continued to pile up like snowdrifts. As a case in point, between December 1996 and April 2003 the Abraham Lincoln Research Web site registered nearly four million hits.1

Under the circumstances it seems unlikely that anyone would be able to say much that is fresh, let alone important, about the sixteenth president. But this new biography by the Rhodes Professor of American History at Oxford University constitutes a brilliant addition to the Lincoln literature. Readers familiar with Carwardine's Evangelicals and Politics in Antebellum America (1993) will find the breadth of research and judiciousness of argument in the present study a fitting sequel to his earlier achievement.

Carwardine bills this work as a political biography, focusing especially on the political sources of Lincoln's authority. He tells us that the president's success stemmed from three factors: personal ambition, sensitivity to public opinion, and mastery of Whig and, later, Republican Party machinery. The book tracks the interplay of these three elements in a narrative framework, stretched over Lincoln's life (1809-1865), with close attention to specific settings.

In one sense Carwardine amply fulfills his promise to provide a political biography. He offers exhaustive attention to the ins and outs of antebellum elections, backroom negotiations, and intra-party squabbling. Readers hoping to learn exactly what the Whig, Republican, and Democratic parties held on the major issues of the day, who voted for whom, and why, will not be disappointed. But in another sense the book is far more than a political biography. Though Carwardine never flat-out ...