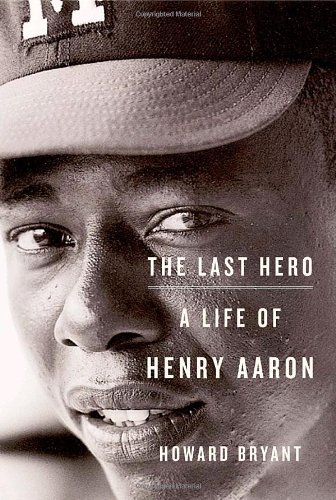 A biography of Henry Aaron.

Bittersweet is a good word to use when speaking of baseball, a measured and modulated word that connotes ups and downs. But the word tends toward darkness rather than light, tugs harshly at the scales; after all, no one says "sweetbitter." And bittersweet is the term that kept coming to mind as I read Howard Bryant's new biography of Henry Aaron. At over 500 pages, the book sets out very deliberately to clarify the enigma that is and always has been Hammerin' Hank, the greatest pure run producer the game has ever known, and yet a man strangely at the margins of baseball's pantheon. The results are as intriguing as Aaron himself.

I most enjoyed the account of the early years of Hank's life and career, though "enjoyed" is perhaps the wrong term, because the meta-narrative of race relations in America is filled with such ugly, troubling reminders, and Bryant's sensibilities as an African American sportswriter (see his 2003 volume Shut Out: A Story of Race and Baseball in Boston) give these early pages a potency in showing the depth of the racial wounds. Mobile, Alabama in the post-WWII era was a hotbed for baseball players, as Satchel Paige had led the way, and Hank and his brother Tommie, Cubs great Billy Williams, Miracle Mets star Tommy Agee, and Hall of Famer Willie McCovey (not to mention minor league washout become Country music star Charley Pride) all met on the playgrounds in the late 1940s and early 1950s for all-day Sunday games. Though Paige had toiled almost his whole career in the great Negro Leagues, the next generation of young players came of age in the post-Jackie Robinson world, and a chance at the major leagues was very real. The phenom from up the road, Willie Mays, had played in a World Series by 1951. And yet, the backdrop of Mobile was one of segregation at every level of society, of threats of violence and lynching, of a not-so-distant history as a major entry port of slave ships.

Hank's links to the racial turmoil of his time seem as pronounced, in some ways, as those of Jackie Robinson, but Hank was a different sort of person, an introvert, a quiet, smoldering spirit who let his bat speak much more than his tongue. He was the last of the great black players to start out in the Negro Leagues, with his month in the spring of 1952 on the Indianapolis Clowns a sort of audition for skeptical big league scouts. The signing by the Braves and assignment to Eau Claire, Wisconsin put Hank in an unfathomably different world: "He was eighteen years old and had never had anything close to an extended conversation with a white person." The next year, as one of three black players to integrate the viciously racist South Atlantic League, Hank heard his first cries of "Alligator bait" and "Go back to the cotton fields," and his white teammate Jim Frey is quoted by Bryant as lamenting: "It was just terrible what he was subjected to. And he just took it all and hit. Baseball is a hard enough game when everyone is rooting for you. You cannot believe what it must have been like to be Henry Aaron in 1953. It was heartbreaking thing to watch."

"And he just took it all and hit." Frey's phrase becomes a cipher to decode Henry's whole career, his tremendous successes on the field, his unease off it. With the powerhouse Milwaukee Braves of the 1950s, Hank would endure the condescension of teammates such as Joe Adcock (who nicknamed him "Steppin' Fetchit") and journalists. He would experience the de facto segregation bound up in northern cities such as Milwaukee (though Hank later befriended several social activist Catholic priests attempting to break the housing bans). His best response was to batter his way into a batting title in 1956, and then the MVP award on the 1957 team, propelling them to the pennant with a home run to clinch against the Cardinals, then battering the vaunted Yankees for three more home runs in a World Series upset for the "Bushville" Braves. But Bryant points out that Hank was also humiliated by a Saturday Evening Post spread earlier in the year, written by white southerner Furman Bisher, which portrayed Hank as a highly talented but intellectually challenged Negro who could barely speak in functional grammar. As Bryant well phrases it, "He was not invisible, but his persona was shaped in the papers and, to a lesser extent, in terms of his teammates solely in the field of play, beginning with his stride at the plate, ending when he made contact." The batter's box was both his emancipation and his confinement.

So the paradigm would continue, through the next fifteen years of outstanding consistency as a player and as a brooding, difficult interview subject. The move of the Braves to Atlanta, back to the deep South but also to the heart of the burgeoning civil rights movement, brought Hank out of his shell a bit, brought him into the company of Andrew Young and Jesse Jackson and the movement of his people, but then the chase of Babe Ruth locked him back into his micro-world, where his bat would bring him, well, bittersweet fruits: "'There is no question he lost something he could never get back, a piece of himself,' said his close friend and attorney, Allan Tannenbaum. 'The chase did that.' "

As in so many instances throughout his life, Hank would not speak publicly about the struggles, but would suffer and brood and sometimes snap under their weight. The slow road of healing—healing from the success of one of the greatest feats in sports history!—would be aided by many relationships (his second wife Billye, his siblings and dogged parents), but Bryant brings into relief the contributions of three white icons of the progressive South: Jimmy Carter, Ted Turner and Bill Clinton, each of whom affirmed Hank more as a man than as a player, filling a void that was dug deep even by his own black peers (the account of Willie Mays's arrogance towards Hank is one of the painful sub-themes of the book). Turner gave Hank his chance in the Braves' front-office, developing minor-league talent, a breakthrough position for an African American in the mid-'70s. But it was Clinton who brought Hank his sense of fulfillment as a political advocate, and Clinton who bestowed national honors on Hank for his humanitarian work. Hank, ever loyal and enigmatic, even supported Hillary Clinton's bid over Barack Obama in the 2008 Democratic primary.

Time and space conspire against the inclusion of too many baseball-related gems from the book, but there are tidbits of lore not to be missed, especially regarding the Braves' tense pennant-battles of the late '50s. One instance of obscuranta leaps out from the 1956 hunt: "in a ten-inning span over the two-game onslaught, hit seven homers off one guy, sad-sack Cubs hurler Warren Hacker." Tough to be a Cub in any era! The comments about Hank's legendary wrists are myriad, and his battles with the dominant pitchers of the era (at the very end of the book, referencing a Bob Costas public interview of Hank and Willie in 2008, Bryant notes the wonderful fact that "the auditorium at the Skirball Center at New York University erupted in an extended standing ovation. Bob Gibson was the exception. Seventy-two years old and still unyielding, Gibson held out, the only person in the audience not to stand"). And on and on the legend goes, Hank the enigma everywhere but in the batter's box. But the slow emergence of Hank the man, the person whose voice and energy helped keep baseball in touch with some integrity in recent bleak times, the man who has seen his life come out from the dark shadows of both his and the nation's past—that is Bryant's worthy theme. If it doesn't come easily, it's because Hank doesn't emerge easily. Instead of The Last Hero, Bryant might well have titled Hank's story Hero at Last. The long hard journey of this book is worth the beneficent arrival.