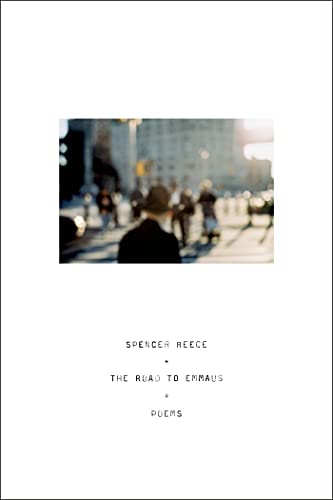 Spencer Reece's second collection of poems, The Road to Emmaus, opens with a stunning poem describing his experience as a priest in a neonatal ICU, which ends:

It is correct to love even at the wrong time.
On rounds, the newborns eyed me, each one
like Orpheus in his dark hallway, saying:
I knew I would find you, I knew I would lose you.

Here, Reece articulates a transcendent and devastating encounter with mortality that strikes the reader with both the perennial familiarity of myth and an arresting contemporary specificity. In the first line quoted above, Reece makes a rather grand philosophical statement, reminiscent of those found in the work of the late Jack Gilbert. Reece wisely uses this type of statement sparingly, as philosophical generalizations are so often problematic. (E.g., What does "correct" mean? What would it mean for a time to be "wrong" for love?) But by moving swiftly past this grandiloquent utterance into his visceral experience in the neonatal ICU, Reece implicitly asks the reader not to dwell on the semantics and technicalities of the statement, but to simply feel its resonance with the experience being described. And, as in the best of Jack Gilbert's work, that resonance is profound. The reader feels the wrongness in the fragility of life and unearned suffering of the newborns, and the correctness in the human attachment between the newborns and Reece.

Unfortunately, this poem remains unequalled until late in the collection (with the prose poem "Hartford: Visions"). That's not to say there isn't much to admire in the intervening poems, but the lyric intensity of the opening poem falls away for a meandering voice that sifts through the details of life, looking for those that are most significant. But the speaker can't seem to decide which are significant—or, when he does decide, why those should be the significant ones.

Reece is a gay Episcopalian priest, and in The Road to Emmaus he primarily explores what at least appears to be the poet's own past, including family history, friendships, romantic relationships, seminary, and priestly duties in such places as prisons and hospitals. The poems vary greatly in length and form: Shorter poems are interspersed with long poems—some well over 20 pages—and the forms he employs include free verse, rhymed couplets (in one poem), prose poems, and a sonnet. The strangest formal element in this collection is unpredictable, sporadic rhyme in some of the long free-verse poems. At times, these random rhymes make it seem as if Reece were poking fun at himself for writing poetry. Most of these rhymes feel overly obvious (beach/each, right/light, phone/alone), calling attention to the artifice of telling a story in poetry. These rhymes, when they appear, often ring with a faux childish note, like T. S. Eliot's in "The Love Song of J. Alfred Prufrock," and indeed, Reece's voice is often full of uncertainty and dismayed confusion, like Prufrock's.

In the title poem, one of the long free-verse poems, the speaker recounts what seems a quasi-romantic, though non-physical, relationship with a man he calls Durrell, whom he met at an AA group and who has died. "[W]herever I moved," the speaker says,

we spoke,
daily, over the phone, on landlines—
talking and listening, listening and talking, for fifteen years:
[…]
In all that time, I only saw him once more,
and by then he was nearly blind.
In all that time, we barely touched one another.

The setting for the retelling of this relationship is a series of counseling sessions with a nun, who has a postcard on her wall depicting Christ's post-resurrection appearance to two disciples on the road to Emmaus, who fail to recognize him as the Christ until that evening as they eat together. In Reece's title poem, as throughout the collection, the speaker searches for God's presence in the daily, concrete reality of his life and relationships. The title of the book and the biblical story it references imply that the sacred is here with us, now, in each particular of our lives—and for the most part we fail to recognize that fact. Reece seems convinced that he has failed to comprehend the sacred significance of his life, like the disciples on the road to Emmaus, and so pores over the details of his past.

At times he seeks God outside everyday life, as in his two periods of seminary study:

But I went in search of the transcendent in those days,
which required leaving a particular world for another.
It is never easy to abandon a world.
It was my second attempt.

Although he is never harshly critical of seminary or the cloistered religious life, Reece does depict such a life as overly removed from the world and as artificial: "Inside everyone sat, knelt, stood, and genuflected / with the informed hush of a troupe of mime artists" ("The Upper Room"). And so it is ultimately in his priestly engagements with the outside world (in orphanages, hospitals, and prisons, for instance) and in his "secular" life that he finds transcendence. As he says about Durrell in "The Road to Emmaus," "All I know now / is the more he loved me, the more I loved the world." It seems that the structure of the secular world, more than that of the church, is most spiritually meaningful to him. He writes about Miami, for instance: "How I love your decks, bridges, promenades, and balconies— / the paraphernalia of connection" ("The Prodigal Son"). It is human connection that remains of utmost importance for Reece, and oftentimes his religious training seems useless to him in his engagements with others, as in "A Few Tender Minutes":

Before me is a man who does not disclose his crime, a Native American who will be released tomorrow … . For forty years, he tells me, his job has been to greet new inmates, which gave him money for toothpaste and pencils. Behind him, a mural of crude voluptuous angels covers the cinder blocks: their wings and breasts have absorbed the Clorox stink of the place. What prayer is in my book for him? The guard picks at his nail beds with his key. He says: "Two more minutes." My crucifix dangles from my chest like a fledgling.

It seems that it is Reece's empathy that has led him into the priesthood, but religion is often insufficient to help the others he cares so deeply about.

Throughout the collection, in the course of autobiographical meditations, Reece engages issues surrounding homosexuality, referencing the Mesopotamian myth of Gilgamesh, a poem fragment by Sappho, and an apocryphal gospel. However, homosexuality is not, here, a subject that in itself necessitates much commentary. In fact, Reece at times seems eager to move away from—or to transcend—sexuality, as in "The Prodigal Son": "The soul has no sex and I am relieved / to speak of a thing alive in the world that has no sex."

After the opening poem, the finest poem in The Road to Emmaus is the long prose poem "Hartford: Visions," a meditation on Reece's family history and his conflicted relationship with his mother. Lyricism returns full force in this poem, along with a vatic voice enmeshed with the contemporary world, as Reece effectively incorporates Old Testament texts in such passages as the following:

Long ago, missionaries tore down the sacred lodges of the Mohegans; now their casinos brighten the land like comic strips. They have healed the wounds of my people lightly, saying: "Peace, peace," when there is no peace.

Why do you make me see wrongdoing and look at trouble? A Puerto Rican mother weeps, her stabbed son intubated before us. Fluorescence illuminates their pietá of pumps and wires.

The central occasion for "Hartford: Visions" is a visit Reece and his mother make to a snowy cemetery, looking for the graves of their family members. Despite their past disagreements, Reece writes movingly of his mother, and their visit to the cemetery becomes a spiritual event:

Passing beneath the sign "The Dead Shall Be Raised," erected upon faux-Egyptian granite columns, here is my mother, visiting the graves in their snowy ruins. Regard her, for she, like the city, was young once. "Do not say that I was beautiful once and now am old," the mother says to the poet, "Do not say that." And so the poem changes like the snow: the snow is white and black like the universe it came from. Hartford listens down the cemetery's long corridors. How lonely sits the city that once was full of people. Below the coffins are thick with facts like filing cabinets; some of the facts are correct, some misplaced, as the dead settle into their final category of aging, becoming a repository of mystery.

The poet Wallace Stevens, who was a resident of Hartford, also haunts this poem. Stevens wrote, "The poet is the priest of the invisible." Reece writes, "A poet, like a priest, works with facts and mysteries: the facts mysterious, the mysteries factual." And so it seems that, for Reece, poetry and the priesthood are two aspects of the same vocation. Both poetry and religion are explorations of mystery, and require a deep engagement with uncertainty. As Reece writes in two passages of "The Upper Room,"

I awaited what I could not see,
an activity that preoccupies many religious lives.

We heard mice and bats in the walls gently tunneling;
they sounded like a hand holding a pen and writing in a diary,
moving forward with blind discovery.

What makes Reece an effective poet is undoubtedly what makes him an effective priest: his desire to meet others in the darkness, awaiting what cannot be seen, and exploring alongside them the mystery of life.

Luke Hankins' first collection of poems, Weak Devotions, was published by Wipf & Stock in 2011. He is the editor of Poems of Devotion: An Anthology of Recent Poets, published by Wipf & Stock in 2012. His chapbook of translations of French poems by Stella Vinitchi Radulescu, I Was Afraid of Vowels … Their Paleness, was published by Q Avenue Press in 2011. His latest book, The Work of Creation: Selected Prose, is forthcoming from Wipf & Stock in 2015. Hankins serves as Senior Editor at Asheville Poetry Review, where he has been on staff since 2006, and was recently hired as Poetry Editor at The Freeman. His poems, essays, and translations have appeared or are forthcoming in numerous publications, including American Literary Review, Contemporary Poetry Review, Image, New England Review, Poetry East, The Writer's Chronicle, and on the American Public Media radio program On Being.