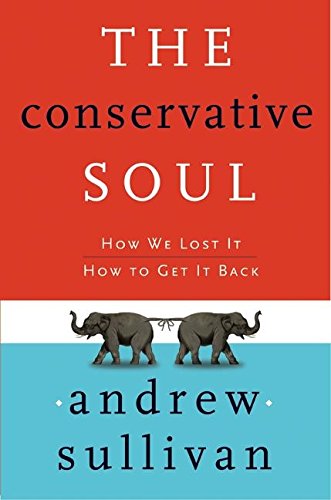 A Canonization of Subjectivity

In his 1908 masterpiece Orthodoxy, G. K. Chesterton explored the phenomenon of modern theologians who deny the reality of sin. "The strongest saints and the strongest skeptics alike took positive evil as the starting point of their argument," Chesterton wrote. "If it be true (as it certainly is) that a man can feel exquisite happiness skinning a cat, then the religious philosopher can make one or two deductions. He must either deny the existence of God, as all atheists do; or he must deny the present union between God and man, as all Christians do. The new theologians seem to think it a highly rationalistic solution to deny the cat."

There are no cats in The Conservative Soul, the new book by Andrew Sullivan. There is, however, tautology, narcissism, and enough moral relativism to light Manhattan for ten years. Sullivan's premise is simple: We just can't know anything for sure. There's no real truth, and anyone who claims otherwise is not really a conservative but rather a fundamentalist. "The essential claim of the fundamentalist is that he knows the truth," Sullivan writes. "The fundamentalist doesn't guess or argue or wonder or question. He doesn't have to. He knows." In opposition stands the true conservative, whose "defining characteristic" is that "he knows he doesn't know."

The true conservative's only guide, posits Sullivan, is his conscience. The conscience is protean and, in Sullivan's case, prone to New Age bromides: "As humans, we can merely sense the existence of a higher truth, a greater coherence than ourselves; but we cannot see it face to face." According to Sullivan, "We see the world from where we are, and our understanding of the universe is intrinsically rooted in time and place. We can do all we can to increase our knowledge and gain deeper and deeper insight. We can read history and philosophy; we can travel; we can ask questions of young and old; we can debate; we can pray; we can grow through the pain and amusement of daily life. But we will never fully or completely transcend where we are. And even if we could, such transcendence would render us unintelligible to those still earthbound."

This is not original thinking, of course. Since at least Nietzsche philosophy has offered thinkers claiming that there are no fixed truths. What's fascinating is when such ideas are praised by someone like Sullivan, who claims to be Catholic. We "will never fully or completely transcend where we are"? And if we could, such transcendence "would render us unintelligible to those still earthbound"? Has Sullivan ever heard of the saints, who some Catholics still believe are intercessors whose message is intelligible? The Virgin Mary? Not to mention Jesus Christ, who one or two Christians believe is truth itself and who was seen face to face?

Sullivan pits the wisdom of the human conscience against the "diktats" of fundamentalism. But his own conscience doesn't prevent him from misrepresenting Scripture and the views of those who disagree with him. At least twice he cites the Bible story where Mary decides to sit and listen to Jesus rather than help Martha do housework. Sullivan finds great wisdom in the idea that Mary "is doing nothing. She is merely being with Jesus. She has let go." But Mary is not just being with Jesus; she is listening to him speak. To Christians, for whom Jesus is the Word, this is no small thing. Because often when Jesus did speak, it was to lay down some ground rules for living. When asked by the young rich man how to achieve eternal life, Jesus' first answer was to "follow the commandments." Sullivan simply ignores this while citing the passage. But that's not surprising. When your create your own moral system, Jesus winds up serving you, not the other way around. "Does Jesus live in the present?" Sullivan asks. "In so much as the memory of his life and beauty of his message permeates us, yes." But enough about me—how do you like me so far?

Sullivan quotes George Weigel and Richard John Neuhaus out of context, but his real botching is with Pope Benedict. In an address ("Conscience and Truth") given in 1991, then Cardinal Joseph Ratzinger "couldn't have been clearer about how an individual conscience is by no means, for him, the final arbiter of morality or truth." At least, that's how Sullivan plays it. Not quite. According to Ratzinger, there are two kinds of conscience. One is prone to subjectivity and error. The "deeper conscience"— or anamnesis, as Ratzinger calls it—"consists in the fact that something like an original memory of the good and the true (both are identical) has been implanted in us." Sullivan is sloppy in describing this, perhaps because he is rushing to scream that the pope hates your conscience: "even when you think you are taking a principled, intelligent moral stand, if you are in disagreement with the Pope . . . you are not in fact exercising conscience. That's a delusion fostered by evil. You are merely demonstrating sin and guilt. There is no conscience distinct from truth, Ratzinger insisted." And since truth is revealed by the Catholic Church, "All protestations of 'conscience' against Church teachings are just further manifestations of sin."