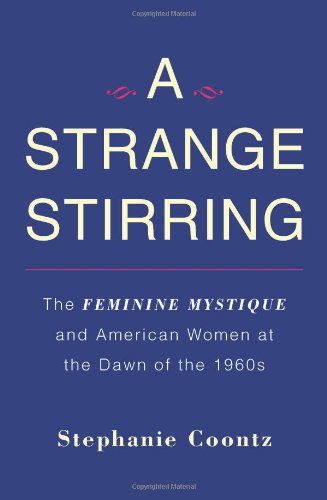 American women, then and now.
March/April 2011

Walking to the subway from my old apartment in Park Slope, Brooklyn, I used to regularly see a beat-up Jeep with the following message on its bumper: "Feminism is the radical idea that women are people too." The message typified the over-the-top and oversimplified political views of my neighbors. (These also included "War is not the answer" and "Dennis Kucinich for president.")

Reading Stephanie Coontz's new book A Strange Stirring, I was reminded that the slogan "Women are people too" was actually the title of a 1960 Good Housekeeping article by Betty Friedan—the article that foreshadowed her 1963 bestseller The Feminine Mystique. And while, even in those benighted days, women were not exactly thought of as less than fully human, their status was certainly different. Coontz, a professor at Evergreen State whose name has become synonymous with groundbreaking research on marriage and family, has attempted to give us a better understanding of what Friedan's book meant to women at the time and to determine whether the book has any relevance for women today.

The Feminine Mystique, which sold more than 2 million copies when it came out, described what Friedan called "the problem that has no name." Here is the famous passage in which Friedan introduces the idea and from which Coontz draws her title:

The problem lay buried, unspoken, for many years in the minds of American women. It was a strange stirring, a sense of dissatisfaction, a yearning that women suffered in the middle of the twentieth century in the United States. Each suburban wife struggled with it alone. As she made the beds, shopped for groceries, matched slipcover material, ate peanut butter sandwiches with her children, chauffeured Cub Scouts and Brownies, lay beside her husband at night—she was afraid to ask even of herself the silent question—Is this all?

In the years that followed, women all over the country read The Feminine Mystique and experienced a sense of relief that someone had finally explained their feelings. Thousands of them wrote to Friedan, and almost 200 of them described to Coontz and her colleagues their reaction upon reading the book. "Everything just clicked," Sally A., who read it as a 32-year-old housewife in Kansas, told Coontz.

As Coontz meticulously documents, the housewife of the 1950s existed in a time warp. The women of previous generations had won the right to vote and gain access to education. But the women of the 1950s seemed to give up on these successes to return to home life. In some ways, their turn inward was understandable. World War II was over, the economy was booming, and advances in technology and transportation had made it possible for huge numbers of Americans to enjoy a comfortable life. "The call for women to return to the home," Coontz writes, "had tapped into pent-up desires for stability among people whose families had been disrupted by the hardships of the Great Depression and World War II." Those social forces led to other anomalies as well. In 1940, only a quarter of women between 18 and 24 years old were married. By 1950, that figure had more than doubled, to 60 percent. But with longer life expectancies and more modern conveniences, it was not clear what these housewives were supposed to be doing.

Whatever emotions were roiling beneath the surface, the suburban idyll portrayed in 1950s sitcoms like The Donna Reed Show or Leave It to Beaver was not so far from real life for much of the American middle class. And women's magazines in particular seemed to push the notion that women had never had it so good. Not only were they economically comfortable, they could even be sexually fulfilled as well.

One woman who was a young mother during this period tells Coontz that she recalls complaining to her own mother about a certain sense of dissatisfaction she felt. In response, her mother asked, "Do you remember what life was like when I was raising you and your brother with no washing machine and a wood stove I had to feed four times a day?" Her mother wondered aloud, "What more could you want?" Friedan's description of family life in the 1950s always sounded to me like the domestic version of Francis Fukuyama's End of History. The great battles had been fought and, well, what more could you want?

But there was more to want. It's important to remember that many of these women had gone to college—at least until they found a husband. Once married, they were told that they should stay at home full time (even after their kids were older and in school much of the day) and be satisfied (even fulfilled) by cooking, shopping, and cleaning. Childrearing didn't take as much time as we might imagine: the number of hours that mothers spend in primary child-care activities is actually higher today, Coontz tells us, than it was back then. (This is one of the little noticed effects of our change from neighborhoods where children played outside by themselves to a strictly kept schedule of extracurricular activities and playdates.)