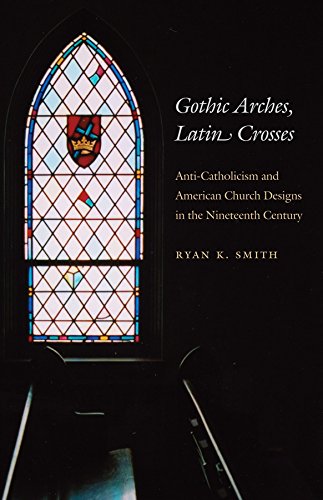 There is no country in the whole world," Alexis de Tocqueville observed in 1840, "in which the Christian religion retains a greater influence over the souls of men than in America." Eighteenth-century philosophes might have assured their readers that the diffusion of knowledge would spell the irreversible decline of religion, but Tocqueville saw facts disproving this jejune theory. "There are certain populations in Europe whose unbelief is only equaled by their ignorance and their debasement," he wrote, "while in America one of the freest and most enlightened nations in the world fulfils all the outward duties of religion with fervor." Plus ça change, plus c'est la même chose. And yet Tocqueville was emphatic that this fervor had nothing to do with forms: "I have seen no country in which Christianity is clothed with fewer forms, figures, and observances than in the United States."

When American Protestants first broke with decades of pious iconoclasm in the 1840s and began adopting the crosses, candles, choir vestments, sanctuary flowers, stained glass windows, and Gothic architecture of Roman Catholics, a sea-change took place in American religion. Why and in what ways Protestants adopted these Roman Catholic forms is the theme of Ryan K. Smith's Gothic Arches, Latin Crosses: Anti-Catholicism and American Church Designs in the Nineteenth Century. Well-researched and engagingly argued, the book is a welcome contribution to a subject that has not received the attention it deserves.

Protestant appropriation of Roman Catholic forms occurred in an America rife with Protestant anti-Catholic bigotry. When Catholic Europeans began immigrating in large numbers in the 1840s, the charge was reiterated that they were superstitious, dangerous, and inassimilable. It is only against this background that one can appreciate the irony of not only the Episcopal Church but the Methodist, Presbyterian, Congregationalist, and even Baptist churches adopting the forms and usages of an otherwise abominated popery. What motivated them to borrow so from their idolatrous neighbors?

The sheer number of those neighbors gave them a kind of irresistibility. As Smith shows, the rise of Roman Catholicism in 19th-century America was phenomenal. In 1820, there were 124 Roman Catholic churches; in 1860, 2,550. By comparison, in 1820 there were 600 Episcopal churches and in 1860, 2,145. With the enormous influx of Irish, Polish, Italian, and German Catholics beginning in the 1840s, the Roman Catholic hierarchy in America reasserted their Church's traditional splendor. By the 1850s, not only Episcopal but non-prelatical churches were increasingly seeking out ways to compete with this Roman magnificence. In 1853, the General Convention of the Congregationalist Church formally approved the use of crosses for their churches by arguing that "There is no good reason why every little chapel of the Mother of Harlots should be allowed to use what appeals so forcibly and so favorably to the simplest understanding, and we be forbidden the manifest advantage which its use would often give us." Here was the argument that would inform a good deal of Protestant borrowing of traditional Roman forms—hence the "unprecedented market," as Smith shows, for pew-fittings, pulpits, fonts, altars, stalls, lecterns, vestments, altar-cloths, surplices, chasubles, albs, and cassocks, though in appropriating these Roman accoutrements, Protestants were careful to make them serve distinctly Protestant purposes.

Second, the Gothic Revival took hold. Kenneth Clark's The Gothic Revival: An Essay in the History of Taste (1928) is still the best introduction to this fascinating subject. Thanks to Pugin and Ruskin and Gilbert Scott (the Revival's most indefatigable architect, who designed the enormous St. Pancras Station and the Albert Memorial), gables, pointed arches, and vaulted roofs became all the rage.

A good deal of the architecture engendered by the Revival was of questionable merit. "The Albert Memorial," as Clark mordantly observed, "is the expression of pure philistinism, and as such is not a document of much value to the student of taste… . The conscious demands of the philistine are unvarying, and the Albert Memorial has always appealed in the same degree to the same class of people—the people who like a monument to be large and expensive-looking and to show much easily understood sculpture, preferably of animals." Ruskin was even more dismissive of the Revival. "I would rather, for my own part," he confessed, referring to his immensely influential The Stones of Venice, "that no architects had ever condescended to adopt one of the views suggested in this book, than that any should have made the partial use of it which has mottled our manufactory chimneys with black and red brick, dignified our bank and drapers' shops with Venetian tracery, and pinched our parish churches into dark and slippery arrangements for the advertisement of cheap coloured glass and pantiles." Indeed, Ruskin had nothing but contempt for what he called "the accursed Frankenstein monsters of, indirectly, my own making."

Meanwhile the Revival ran its course. When the vogue reached America, cathedrals soon followed—in Kentucky and Missouri, in Philadelphia and New York. And Protestants made no bones about how fascinating they found them. One Methodist minister visited the Cathedral of St. Peter in Cincinnati in 1847 and drew up an admiring catalogue of the place's "sacred furniture" before writing: "Look, now, upon all that brilliant scene—the brazen fence, the velvet-cushioned cathedra, the marble altar … and all that array of masterly and affecting pictures—and then ruminate on the design of all this splendor." Rumination led to emulation. In the Gothic style Protestants saw an ideal not only of piety but of refinement, and they were determined to make it their own. By the 1840s, Protestants could boast of Gothic churches that were as good as the best of their Catholic rivals, including Richard Upjohn's superb Trinity Episcopal Church in New York.

That "Gothic" became synonymous with refinement would have appalled Ruskin, who insisted that one of the indispensable elements of true Gothic was what he called "savageness." In his great essay "The Nature of Gothic," from The Stones of Venice, he described

this wildness of thought, and roughness of work; this look of mountain brotherhood between the Cathedral and the Alp; this magnificence of sturdy power, put forth only the more energetically because the fine finger-touch was chilled away by the frosty wind, and the eye dimmed by the moor-mist, or blinded by the hail; this outspeaking of the strong spirit of men who may not gather redundant fruitage from the earth, not bask in dreamy benignity of sunshine, but must break the rock for bread, and cleave the forest for fire, and show, even in what they did for their delight, some of the hard habits of the arm and heart that grew on them as they swung the axe or pressed the plough.

Members of Trinity Episcopal Church might not have seen all of that in their lovely new church, but they did see a kind of WASP revenge in it. As one contemporary wrote, "It is pleasant to see the emigrants when they swarm up Broadway from the ships, stop in front of the Church, which they take to be a Roman Catholic Cathedral on a small scale, and kneel before it on the pavement, thanking their God for bringing them safely to land."

Ruskin argued that true Gothic did not derive entirely from papal Christianity. For him, this was evident in the almost pagan delight it exhibited in the natural world, in "the wandering of the tendril and the budding of the flower," which, in turn, prefigured the humanism of the Renaissance and the emergence of the natural sciences. Some Protestant advocates of the Gothic refused to acknowledge any debt to Rome at all. One claimed Biblical precedents for the Gothic. In his Essay on Gothic Architecture (1836), the Episcopal bishop John Henry Hopkins traced the Gothic back to Palestine and before that to the temple of Solomon. "The style in question," he asserted, "is the most ancient in the world." Medieval Roman Catholics were not the first but nearly the last to adopt it. It is amusing to imagine how such a claim would have gone down with Pugin, who once told a friend that, "after a most close and impartial investigation, I feel perfectly convinced that the Roman Catholic Church is the only true one, and the only one in which the grand and sublime style of church architecture can ever be restored."

Drawing on ecclesiastical, architectural, and social history, Smith has put together an incisive, thought-provoking book. For the Roman Catholics and Protestants who made the Gothic Revival possible, forms were of inestimable importance. Kenneth Clark realized this when he wrote, apropos Pugin,

The mere names of articles of church furniture were to him like choice wine to an epicure; often the point of an argument is lost while he rolls them round his tongue—"the stoups are filled to the brim; the rood is raised on high; the lamps of the sanctuary burn bright; the saintly portraitures in the glass windows shine all gloriously; and the albs hang in the oaken ambries, and the cope chests are filled with orphreyed baudekins; and pix, and pax, and chrismatory are there, and thurible and cross."

There is a kind of Paterian voluptuousness about that. But on the same subject we also have the more practical Newman, who once reminded his readers that "Forms are the very food of faith."

Edward Short is at work on a book about John Henry Newman and his contemporaries.