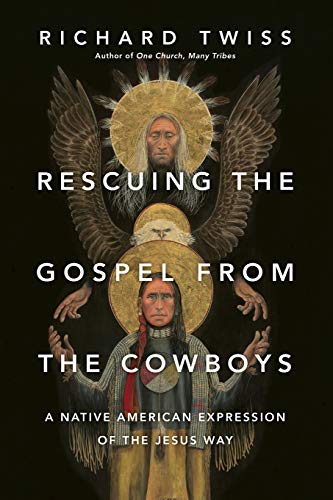 Rescuing the Gospel from the Cowboys: A Native American Expression of the Jesus Way
Richard Twiss
IVP, 2015
272 pp., 25.00

Toward a Native Theology

The legacy of Richard Twiss.
November/December 2015

Richard sat around the large powwow drum with Terry and Matt LeBlanc, Randy Woodley, and Ray Aldred as the late sun of a summer afternoon streamed in through the stained-glass images of Wesley, Luther, and Jesus in Gary United Methodist Church. The squared sanctuary, with its dark wood and large pipe organ, resonated with loud synchronized beats of the powwow drum mingled with singing in another tongue. At the transition of each round in the song, thunderous honor beats rang out as worship was offered to the Creator. The space and our hearts reverberated with the heartbeat of the drum, which had been lovingly carried by four Natives through the streets from Wheaton College.

Richard Twiss, whose heritage was Sicangu Lakota from the Rosebud Reservation in South Dakota, had come to Wheaton to participate in the annual symposium of the North American Institute for Indigenous Theological Studies (NAIITS-An Indigenous Learning Community). Opening ceremonies were held on the quad of the college, with Vincent Yellow Old Woman overseeing the protocol. The symposium closed with a fire ceremony on the same ground, once Potawatomi land. The ceremony began with smudging. Each person in the circle drew the fragrant smoke of sage up over their head, around their body, and down to their feet in an act of spiritual cleansing. Prayers were offered to Creator as Natives and non-Natives renewed their commitment to walk in the Jesus way.

Richard had read a paper at the symposium entitled "Rescuing Theology from the Cowboys: An Emerging Indigenous Expression of the Jesus Way in North America," the title of the dissertation which earned him a DMiss at Asbury Seminary. The essay, subsequently published in the NAIITS journal,[1] does not reflect the pathos of Richard's oral presentation. He seemed weary and spoke of longing to be with his people. He was true to his name, Taoyate Obnajin, which translated means "He Stands with His People." A few months hence he "walked on" after suffering a massive heart attack at the National Prayer Breakfast.

Rescuing the Gospel from the Cowboys: A Native American Expression of the Jesus Way is a revision of Twiss's doctoral dissertation, edited and published posthumously. The book is an impassioned and sometimes jarring appeal for the development of a truly Indigenous approach to theology, worship, and praxis. Expressing deep concern about the small percentage of Native Americans who are Christian and the way most Native church services are nearly identical to their white counterparts, Twiss argues that contextualized Native Christian theology and worship are necessary for the Jesus way to flourish among Indigenous peoples.

Twiss' plea may come as a surprise to anyone aware of the indigenization of theology and worship in the Majority World. African Christian worship includes dance and drum without raising a single missionary eyebrow. But contextualized theology and worship among Native North Americans are often viewed with suspicion and met with resistance. When NAIITS was invited to Wheaton College in 2012, the first question raised was, "What about syncretism?" Before members of the group returned in 2015 someone asked, "What are their views on Chalcedon?"

The unending critiques and doubts about indigenous theology and worship wearied Richard. Rescuing the Gospel from the Cowboys is an attempt to move the discussion further down the road. It explains the reasons behind the suppression of a contextualized expression of the gospel among Native North Americans, presents an argument for critical contextualization, and provides a chronicle of people and events that are moving the contextualization agenda forward. This narrative theology does not read like a text on systematics.

Twiss traces the relationship between Christianity and the colonization of North America. Colonization was driven in part by papal bulls which authorized the subjugation of non-Christian peoples and the taking of their lands. Twiss also explores how Henry VII charged John Cabot "to seek out and discover all … Provinces whatsoever that may belong to heathens and infidels" and to "occupy, and possess these territories." James I called upon British colonists to "propagate Christian Religion to those [who] as yet live in Darkness and miserable Ignorance of the true Knowledge and Worship of God, and [to] bring the Infidels and Savages, living in those Parts, to human civility, and to a settled and quiet Government."

Themes from this doctrine of discovery were molded into the national myth of Manifest Destiny. Twiss quotes John O'Sullivan, who, in 1845, said that the legal title to Oregon "is by the right of our manifest destiny to over spread and possess the whole of the continent which Providence has given us." The continent was a New Canaan, and those who lived there were as the Canaanites, who could be either conquered or "civilized" according to European values, including Christianity. As Twiss says, "Manifest Destiny, Scripture and Christian mission merged together and were perceived as one and the same for those entrenched in the European Enlightenment."

The boarding school movement was another instrument of "civilization." Native children were taken from their families to places like Carlisle Indian Industrial School, where their hair was cut, their clothes exchanged, their language forbidden, and their traditional life-ways suppressed in favor of Christian instruction. The gospel as thus transmitted was not good news for Indigenous people. It separated them from their land and life, their cultures and communities, and from themselves.

Twiss's book must be read within this historical context. He does not merely recount past events but describes a near and present history. Unfortunately, even now, the brutality of colonization in North America is not fully acknowledged in the United States.[2] The lack of adequate national and ecclesial reflection on the history and enduring effects of colonization on Native North Americans underscores the urgency of reading and understanding "the Christian problem" for Indigenous peoples.

Unsurprisingly, Indigenous expressions of the Christian faith have been difficult to come by. Many non-Native and Native Christians alike have embraced the notion that anything traditional needs to be forsaken and suppressed when one becomes a Christian. Twiss counters by arguing that critical contextualization is a necessary part of Christian proclamation and life. The gospel always comes clothed in culture, whether Jewish, Greco-Roman, or Indigenous. Twiss defines contextualization as "the attempt to communicate ideas across cultural differences in ways that make sense to a particular audience." He regards "critical contextualization" as an "ongoing process" which "allows us to trust the Holy Spirit to direct us in this erratic, courageous and faithful process of discovery." As an evangelical, Twiss affirms that "Christian faith must be firmly rooted in Scripture and the historical/living Christ," but also that "[f]rom this 'root', local Indigenous forms, structures and practices can be fearlessly considered an integral part of the process of making Christianity one's own—personally and collectively." Constructive Native theology must be developed.[3]

On the other side, Twiss and others in the Native contextualization movement recognize the need to argue vigorously that they are not replacing the core of Christian faith with another worldview. The lead article in the first volume of the NAIITS journal (Twiss was one of three authors collaborating on this piece) had differentiated contextualization from syncretism.[4] In the present volume Twiss sought to take some of the teeth out of the term by redefining syncretism as "the exploration of the synthesis of faith, belief and practice in a dynamic process of blending, adding, subtracting, changing, testing and working things out. This process does not take anything away from the authority of Scripture or orthodoxy." Here he describes this positive process as "ways of doing story." But Twiss contrasts this with "counteractive syncretism," ways of mixing "core religious beliefs that ultimately diminish, fully resist, or finally stop—counteract—one's personal faith journey as a follower of Jesus and his ways."

Stories of cultural suppression, of longing to be fully Native again as followers of the Jesus way, and of discovering that Christ can be present in the sweat lodge fill the book. The presence of so much story is a distinctive feature even in the original dissertation. Narrative plays a leading role in Indigenous communities. As a Native theologian Twiss recounts his struggle with fitting into the structures of the Western academic tradition. His perspectives here mirror those described by Linda Tuhiwai Smith, who wants to set a new research agenda "situated within the decolonization politics of the indigenous peoples movement. The agenda is focused strategically on the goal of self-determination of indigenous peoples."[5] Indigenous research is community-based, promoting collaboration and discussion. It does not pretend to be objective and neutral but is involved in the story. The researcher is embedded in a network of relationships where the ethics of humility and honor are supreme. Method, then, becomes a way to write back against colonial perspectives.

At the same time, Twiss and others in the contextualization movement recognize the need to engage the majority culture. The project calls for innovators who are able to be "150% men and women," as he says, those who can function in the two worlds of the colonized and the colonizer. But there is tension here. Such figures constantly juggle competing perspectives as they seek to be faithful to their people and faithful communicators in a wider context.

Twiss' own book reflects that struggle. The voice within the book is different from the voice in the dissertation. We expect that dissertations will transform as they move to publication, but the style of Rescuing the Gospel from the Cowboys changed from a Native mode of argumentation, which talks around issues, into a Western form of argumentation. Twiss's Lakota voice was "re-contextualized" for non-Native Americans. Richard approved the changes his editors, Ray and Sue Martell, suggested. But the result is the loss of an authentically Indigenous academic book upon its conversion into an accessible volume for non-Natives.

The loss of this authentic voice has been lamented within the NAIITS community. And we should all lament. This is not to say that Twiss's views have been lost in Rescuing the Gospel from the Cowboys. The concerns of the contextualization movement are truly present. But the choice was made, as it has been through our history, to let the majority culture set the agenda for the way the Native story is told.

Still, this is an important book for non-Natives. We can and must learn the Native story, as we did that day sitting between Luther and Wesley at Gary Church. But we need to walk further by going into Indigenous communities, waiting humbly to be welcomed into their circle and story. The way to learn and restore a shattered relationship is by deep listening as we sit among Richard's oyate, his people. And at that moment a realization will dawn on us: we all are deeply embedded in the story. As Richard said at the end of each address, Mitakuye Oyasin, "All my relatives." This is our common story, but we hardly recognize it.

2. Canada is a few steps ahead of the United States in acknowledging, for example, the enduring effects of the boarding school movement on First Nations communities. See the findings of the Truth and Reconciliation Commission (www.trc.ca). See also David E. Stannard, American Holocaust: The Conquest of the New World (Oxford Univ. Press, 1992); Roxanne Dunbar-Ortiz, An Indigenous Peoples' History of the United States (Beacon, 2014).