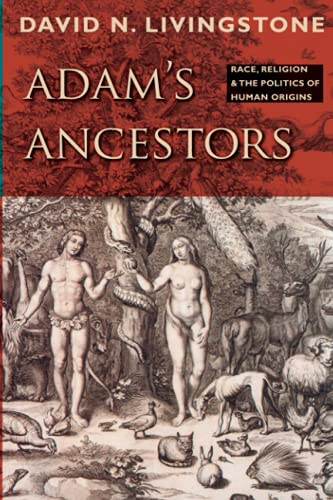 For those who want to read more about the historical Adam, I have a book to recommend: Adam’s Ancestors: Race, Religion, and the Politics of Human Origins, by David N. Livingstone, published by John Hopkins University Press in 2008. Livingstone’s fascinating history doesn’t settle any of the disagreements among participants in our symposium, but it does provide an unfamiliar context which offers fresh perspectives—and maybe a cautionary tale.

Although fugitive speculation about pre-adamic humans can be found in late antiquity and the Middle Ages, such notions blossomed in the 17th century in the writings of Isaac La Peyrere. While initially associated with heterodoxy, Livingstone observes, “the theory later came to reside among religious conservatives. . . . Now, rather than undermining biblical authority, the pre-adamites were coopted as a means of preserving its integrity in the face of challenges to its infallibility from a variety of scientific disclosures. . . . In each case the motivation was to keep faith with both science and the Bible. . . . By working to preserve the peace between science and theology, it is not so much that pre-adamism acted as a conceptual bridge between two discrete spheres of knowledge and belief. Rather, it functioned as a kind of mold that sculpted both scientific commitment and theological conviction into a distinctive shape”—sometimes a very ugly shape. “Harmonizing strategies . . . transform the very notions they seek to unite.”

I’m grateful to all of the participants in our symposium for carrying on this public conversation without muting their strong convictions even as they were willing to listen to others with whom they strongly disagree. I hope the conversation will continue.

Copyright © 2015 by the author or Christianity Today/Books & Culture magazine.