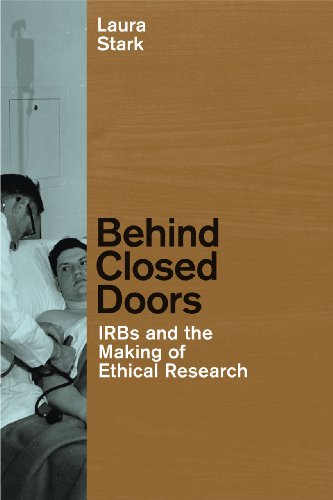 A conversation with Michael Leary.
October 2012

Earlier this year, we invited readers to suggest possible topics for Science in Focus. Right away, I heard from Michael Leary, who suggested Laura Stark's book Behind Closed Doors: IRBs and the Making of Ethical Research. His suggestion was excellent, and Heather Whitney and I followed up on it. But I was curious. I knew about Michael's commitment to New Testament scholarship, not to mention his seemingly inexhaustible knowledge of movies. Where did his interest in research ethics originate? Hence this conversation.

How did you get into this field?

I am a New Testament Studies academic by trade and have a faculty position in that field. While doing my postgraduate studies at the University of Edinburgh, I began thinking in a far more interdisciplinary way about NT studies through the lens of other departments like Anthropology, History, etc. But I was finding that my training had not included the basics of social-scientific research methods that are standard in those fields; things like basic research design concepts and statistical modeling. When a job in human research ethics opened at Washington University in St. Louis, I saw it as a way to become involved directly in the kinds of research that puzzled me.

So I took it and discovered a very complex and important niche that is largely hidden within the research process. I have since been able to conduct oral history research on how human research ethics have worked in the past. Prior to the publication of Stark's important book, I had begun similar observational/behavioral research of IRB ethical decision-making. The IRB world proved a natural fit for my research background and general interests.

What was your reaction to Daniel Kahneman's recent cautions on priming studies? Does this suggest a wider conversation in which the issues raised in Stark's books have a place?

The magnitude of risk involved with most priming studies is so low that it doesn't trigger key IRB concerns with risk/benefit ratio. Generally, a study can pose risk to participants as long as it provides some sort relative of benefit to the participant or society. But if we extend Kahneman's concerns about replicability to human research more broadly, what he is saying becomes important. If a study with significant risks is poorly designed or not sufficiently powered statistically to produce good data, then it would be unethical to allow people to participate in it. Why expose people to risk for no reason? This was a question at the heart of the Nuremberg Doctors' Trial.

Even if it needs a bit of reform, one of the key features of the IRB group review model is that it can catch these kinds of research design flaws. Stark's book is very timely in that many of the questions she raises about community review processes in research have a lot in common with current debates about peer review in general. Who gets to be the gatekeeper? How do we balance academic ingenuity with the ethical ramifications of progress? These questions have a fundamental impact on the kind of information we will see produced by science in our lifetime.